Zilla Name Controversy is the 6th episode of Wikizilla's Kaiju Facts video series. It was uploaded on May 7, 2018.

This video looks at the status of ZILLA™ and the 1998 GODZILLA®. In summary, the 1998 Godzilla is still GODZILLA® and it is, technically, a different character from ZILLA™, although the latter is very obviously based on the former. From 2004 onward, any future appearances of the TriStar "Godzilla®" will be under the name "Zilla™". 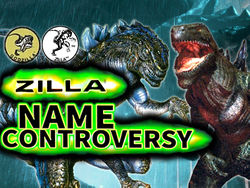 In the couple of years leading up to the release of the 2014 American "Godzilla" reboot, a sizable portion of the Godzilla fan community was torn apart by a debate over whether Toho had retroactively changed the name of TriStar's version of Godzilla to simply 'Zilla' during production of 2004's "Godzilla: Final Wars." The furor intensified once it became known that Zilla would appear in the next IDW comic, "Rulers of Earth"—his first sighting in Godzilla media since "Final Wars." At stake was nothing less than… well, the standing of one poorly-received Hollywood blockbuster in a franchise that has lasted for over half a century.

Back then, Wikizilla was on the wrong side of the debate, with a whole page called the "Zilla Name Change," which attempted to explain how Toho had allegedly changed the copyrights and names of the specific 1998 Godzilla incarnation. Today, we're going to explain how the so-called 'Godzilla in name only' really wound up with a name of his own.

In 1992, Toho and TriStar's parent company, Sony, agreed to a contract that would allow the young Hollywood studio to use the 'character and likeness' of Godzilla in its own film. Toho would have to approve Godzilla's new appearance, and could do whatever it wished with the design after the film was released and Sony's rights reverted back to Toho. However, both companies would own the copyright to Sony’s film in perpetuity — Toho in Japan and Sony in the rest of the world. Changing that copyright would require mutual consent.

As the marketing for the film ramped up in late '97 and early '98, Sony became convinced they had the blockbuster to end all blockbusters on their hands. They paid Toho $5 million for the rights to produce a sequel, so long as its development was well underway within five years of the first film's release. This also postponed Toho's ability to use the TriStar design on its own.

...and, well, you know how the movie turned out. It didn't bomb, but it performed far below Sony's expectations. The studio pondered a sequel or a reboot; ultimately, it chose neither, and its rights to a follow-up expired in 2003, one year before Godzilla's fiftieth birthday.

For the film that would celebrate this anniversary, Toho held nothing back. Fourteen monsters would parade across the screen, by far the most in the series' history. As director Ryuhei Kitamura was working on the roster, he asked producer Shogo Tomiyama if it was possible for TriStar's Godzilla to make an appearance. Tomiyama concluded that it was. For the sake of clarity, however, the beast would have to be renamed. In recognition of the way TriStar's depiction "took the God out of Godzilla," they chose the name 'Zilla', and the rest is history.

That quote from Tomiyama circulates among Godzilla fans to this day. The Zilla Name Change myth gained popularity because an abundance of fans wanted to believe that Toho hated TriStar’s Godzilla as much as they did. To be sure, some of the people who worked on Toho’s Godzilla films were open in their distaste of TriStar's offering — suit actor Kenpachiro Satsuma walked out of a screening of the film at G-Fest '98, director Shusuke Kaneko quipped that "[Americans] seem unable to accept a creature that cannot be put down by their own arms," and so on. But Toho is a company: they primarily hate things that don’t make them money. "GODZILLA" made plenty, and continues to through TV airings, soundtracks, and home video sales to this day. The same holds true for Sony. Neither company would benefit from the confusion of retitling the 1998 film and its monster "ZILLA," and its copyright remains unchanged to this day.

Of course, Zilla is the TriStar Godzilla in all but name. His CG model for "Final Wars" was even created from a scan of a Trendmasters Godzilla figure. But Toho has copyrighted other monsters under multiple names before; Zilla is just the latest example. Given the design's enduring unpopularity though, it may be that it will never be attached to its original name again… and this state of affairs does nothing to rewrite history. In 1998, Roland Emmerich directed a film called "GODZILLA." Whether the monster in that movie lived up to his legendary name is a matter of opinion. His name is not.

Much of this information is sourced from Keith Aiken's monumental "GODZILLA Unmade" article hosted on SciFi Japan. Check that out for more details if you're interested.