The Megalon kaiju profile is the 58th episode of Wikizilla's Kaiju Profiles video series. It was uploaded on May 4, 2020. 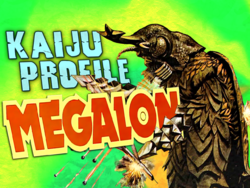 Hey kaiju fans, it's Titanollante, and today we're looking at the insect god of Seatopia — Megalon!

The dimwitted antagonist of 1973's "Godzilla vs. Megalon," he was the guardian deity of the subterranean Seatopian civilization. They unleashed him upon the surface world in retaliation for underground nuclear tests which threatened their home. Backed up by the alien cyborg Gigan, he engaged in a tag-team duel against Godzilla and the human-built robot Jet Jaguar. Ultimately, Earth's defenders prevailed, and Megalon retreated to Seatopia.

Though his sole film appearance doesn't have the best critical reputation, Megalon has maintained a fair deal of popularity, especially in the U.S. (where his movie got heavily promoted).

The idea for Megalon goes back to 1969's "All Monsters Attack." Initially, the bully monster Gabara was named "Gebara" and conceptualized as a giant mole cricket rather than a toad. Toho revived this design during production on "Godzilla vs. the Space Monsters: Earth Defense Directive," a precursor to "Godzilla vs. Gigan." Here, the insect monster Megalon was to fight beside Gigan and King Ghidorah under the command of the alien brain Miko against Godzilla, Anguirus, and the living statue Majin Tuol. Shinichi Sekizawa's draft described Megalon as moving quickly and expelling a gaseous smog from his body, while Kaoru Mabuchi's draft specified that he had eyes on the ends of his antennae. Megalon, Miko and Majin Tuol were ultimately dropped from the movie.

Megalon's designer remains a mystery. Akihiko Iguchi is often credited, but he's denied any involvement with "Godzilla vs. Megalon." According to special effects director Teruyoshi Nakano, his face was based on the Japanese rhinoceros beetle, his body on cicadas, and his method of movement on grasshoppers. Nakano initially wanted to base Megalon on a dragonfly or ladybug, but settled on the rhinoceros beetle as it was popular among children at the time. Some rejected concept art for Megalon gave him four horns in place of his large singular one, and a bright red and orange color scheme.

Noboyuki Yasumaru was primarily responsible for modeling Megalon's suit, while Tomoki Kobayashi handled the drill arms. Suit actor Hideto Date portrayed Megalon, though Gigan suit actor Kenpachiro Satsuma claimed to have played the insect monster himself… presumably in scenes without Gigan. Megalon's suit was the heaviest constructed by Toho at that time, making the monster's leaps through the air extremely difficult to film. Nakano reportedly became so frustrated during filming that these scenes were almost dropped altogether. They ended up being realized by a team of crew members standing in the rafters repeatedly hoisting the suit with Date in it up and down. Date had a hard time hearing through the suit, and as such one of the assistant directors had to blow a whistle to notify him when to jump.

In addition to the suit, a 1-shaku, or Japanese foot, prop was utilized for flying scenes.

Godzilla vs. Megalon (1973): After his subterranean kingdom of Seatopia was damaged by underground nuclear testing, Emperor Antonio called upon the guardian deity Megalon to wage war against the surface world. First destroying the Ogouchi Dam, the monster was subsequently guided towards a showdown with the JSDF by the robot Jet Jaguar, which had been seized by Seatopian agents. The military proved to be no match. Fortunately, Jet Jaguar's inventor, Goro Ibuki, managed to free the robot from the Seatopians' control and told him to travel to Monster Island and recruit Godzilla. Jet Jaguar obliged, prompting Antonio to contact the M Space Hunter Nebula Aliens and ask for Gigan to back up Megalon. Though he was disoriented for a time, Megalon managed to get back on task following a JSDF air raid, and laid waste to Tokyo. Jet Jaguar returned to Japan and confronted Megalon in a field, growing to gigantic size to fight him. Monster and machine were equally matched until Gigan arrived. Before they could destroy Jet Jaguar, however, Godzilla arrived to even the odds. The heroes' combined might was enough to overwhelm Megalon and Gigan, the latter hastily retreating back to space. After he faced Godzilla's legendary sliding kick, the Setopians finally recalled Megalon and sealed all of their passages to the surface world.

Megalon can fire a yellow lightning-like beam from the horn on his head, called the Beast-Killer Laser Beam. It is suspiciously similar in power to King Ghidorah's Gravity Beams, thanks to the copious stock footage used to depict it striking buildings and military vehicles. In "Godzilla: Domination!," he instead unleashes three green energy blasts from his horn.

Megalon can combine his forelimbs to form a single, rotating drill - called Double Drill - allowing him to burrow underground at Mach 3 and launch surprise attacks against Jet Jaguar. Moreover, he can swim underwater at Mach 4—something not demonstrated in the actual movie.

Using his massive wings, Megalon can achieve flight at speeds of up to Mach 3. He also possesses spring-like legs which enable him to perform up to 10-kilometer leaps through the air. Megalon may combine these abilities, essentially 'surfing' on air.

Megalon's wings can generate hurricane winds that reach speeds of 1,000 meters per second. These winds can decimate buildings, per the book "Toho Special Effects All Monsters Encyclopedia."

Megalon generates and stores several Geothermic Napalm Bullets in a sac-like organ in his stomach, which he can fire from his mouth. His horn glows with a yellow hue when preparing to launch these bullets. He used them to great effect in his attack on Tokyo, knocked Jet Jaguar out of the sky, and quickly created a ring of flames around Godzilla and Jet Jaguar. High Temperature Geothermic Napalm, his super special move in the Super Famicom game "Godzilla: Great Monster Battle," is a beefed up version of the attack bursting wider-spread, taller, and longer-lasting spires of flame. In "Domination!," they resemble naval mines, only detonating if walked over by an enemy or launched directly at them. Also, some promotional stills for his movie depicted him firing a spiral light beam from his mouth instead.

In the games "Godzilla: Destroy All Monsters Melee" and "Save the Earth," Megalon's rage attack, Magnetic Vortex, generates a magnetic field to pull an enemy monster toward him before releasing a destructive pulse that sends them flying. In "Save the Earth," Megalon can release electromagnetic pulses to knock enemies away from him when on the ground.

Physical abilities: In hand-to-hand combat, Megalon relies on his drill-like appendages, large head horn, and powerful kicks. His punches can drill into an opponent's flesh or discharge electrical energy. He may also propel this energy as a spherical projectile called Advancing Energy Ark, or simply Energy Arc. In "Godzilla: Domination!", he has a tail long enough to lash out at his enemies and can drain their health using Leech Probe.

Additional miscellaneous attributes include the monster's horn doubling as a radar and his compound eyes giving him eyesight superior to that of humans by a hundredfold.

Durability: Megalon is partially protected by his shell, which is similar in hardness to diamond. While he took quite a shellacking from the JSDF, including Maser beams to the eyes, he emerged unscathed. His greatest feat of durability was a humiliating one: accidentally swallowing one of his own napalm bullets without his head exploding. Still, it took him out of the fight for good.

Weaknesses: Megalon seems more interested in tormenting his opponents than actually killing them, using his many powerful abilities sparingly. The Seatopians seemed to underestimate how much guidance their god needed to ravage the surface world, and it must've been embarrassing to watch him throw a temper tantrum after his shiny new toy flew away.

Other film and TV appearances: In "Godzilla Island," Megalon was one of the Xiliens' minions. After a couple of team-ups with Battra, G-Guard threw him into prison with Destoroyah, who became his ally for the rest of the series. On the YouTube web series "Godziban," he was also a recurring character in the "Go! Jet Jaguar" segment, where he is an enemy of JJ and Godzilla. He bullies Little Godzilla and Minilla in one episode, only for an inflated Jet Jaguar to scare him off. Megalon toys also appear in "Godzilla: Final Wars" and the 2008 "Go! Godman" film.

Video games: Megalon has a strong presence in video games, dating back to the first official Godzilla game, "Godzilla vs. 3 Giant Monsters" for the MSX. Other notable game appearances include the "Godzilla" arcade game, "Godzilla: Battle Legends" along with its sequel, "Kaiju Daikessen," and all of the Atari-licensed Godzilla games.

Books: Megalon appeared twice in Random House's Godzilla books. In "Who's Afraid of Godzilla?", he and Gigan tried taking over Monster Island after Godzilla left, only for the King of the Monsters to send them packing when he returned. He attacked Lima, Peru, in "Godzilla at World's End", despite what the back cover said. He's also featured in both official prequel novels to the "GODZILLA" anime trilogy. In "Monster Apocalypse," Megalon landed on the west coast of Africa in 2012 and crossed the continent, destroying several small nations along the way. He returned 10 years later and destroyed the Republic of South Africa. In "Project Mechagodzilla," he reappeared in war-torn India and Pakistan, further devastating them before moving on to the Philippines. He broke through the joint Japanese-American defense line and landed at Blue Beach in Okinawa, where he was confronted and killed by the Okinawan guardian monster King Caesar.

Comics: "Godzilla vs. Megalon" received comic book adaptations in both Japan and the U.S., though the American comic was much shorter. No Seatopians this time: his hunger for energy drove Megalon to attack civilization instead, and Godzilla seemingly killed him with a bite. In the first volume of Kodansha's "Godzilla, King of the Monsters" manga, Megalon was a pawn of the mad Dr. Oniyama, who unleashed him to attack Godzilla alongside Neo Biollante. Megalon accidentally destroyed Biollante with a blast from his horn, which the Big G proceeded to knock off with a tail whip, subsequently setting him alight with an atomic blast. Two decades later, Megalon appeared in the third issue of "Godzilla: The Half Century War" as one of the numerous kaiju attacking Ghana in 1975. In "Rulers of Earth," the Shobijin described how he menaced humanity in the ancient past, only to be confronted by King Caesar. Both monsters fell into the Earth's crust after a Cryog ship crashed into the ocean nearby. Megalon never appeared in the present day, though he was depicted on a mural on Infant Island along with the other “fire monsters.” Most recently, Megalon appeared alongside Gigan in the first issue of "Rage Across Time," where the Nebulans used both monsters to invade ancient Japan. After the warrior Akio destroyed the device the Nebulans were using to relay orders to the monsters, Godzilla drove the two off. In the final issue, he took on Megaguirus and a couple of Kamacuras in the Early Cretaceous.

That's all we have for Megalon. Thank you all for watching, and stay safe.