Inconsistent Kaiju Stats Vol. 1 is the 4th episode of Wikizilla's Kaiju Facts video series. It was uploaded on October 8, 2017. 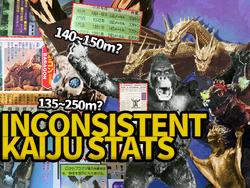 The primary focus of this video is exposing the conflicting numbers given for monsters' attributes in official sources, as opposed to on-screen discrepancies such as ... Titanosaurus changing into the size of a mountain, or Gigan and Ghidorah suddenly becoming considerably smaller than the Godzilla Tower as they encircle it, nor are we talking about how in "Destroy All Monsters," Gorosaurus is apparently 35 meters even though he's the same size as the 50-meter Godzilla. With that said, let's dive straight into the first creature on our list:

Varan is probably one of the most confusing cases of inconsistent stats in the entirety of the Godzilla series. To make things clear from the get-go: the Varan in the 1958 "Varan the Unbelievable" and the Varan in the 1968 "Destroy All Monsters" are separate. They kind of have to be considering the original Varan blatantly dies at the end of the movie. Anyways, the 1958 Varan is without any doubt 50 meters tall and 15,000 metric tons. Got that so far? Well, here's where it gets weird.

If you look at pretty much ANY and ALL Godzilla media that lists monsters' stats, the "Destroy All Monsters" Varan will be listed as being 50 meters and 15,000 metric tons -- the same as the original Varan. However, books released near the time of "Destroy All Monsters" such as this Asahi Sonorama book (as well as this book called "Encyclopedia of Godzilla (Mechagodzilla Edition)" from 1993) gave the '68 Varan different stats than the original '58 Varan: a 10 meter height and a slightly obese (the encyclopedia's words, not mine) 60 metric ton weight.

So what the heck is going on here? First we need to explain Varan's appearance in "Destroy All Monsters." Originally, the script called for Varan to participate in the final fight against King Ghidorah. However, the Varan suit was in very bad condition by that point, and only a 90 centimeter prop could be used. To reconcile this, some promo materials explained that the Monsterland Varan was a juvenile. Still, how does this explain most books retconning his size to being 50 meters?

There's nothing concrete for sure, but one hypothesis is that Toho completely forgot that the "DAM" Varan had different stats from the original Varan in the first place, and whenever companies requested kaiju stats, Toho only gave them the '58 Varan stats which they had readily available. So the clearly very small 1968 Varan was said to be the same size as Godzilla because Toho's staff just forgot about the 10 meter juvenile explanation.

Oh and "Godzilla 1954-1999 Super Complete Works" randomly says that the second Varan is 30 meters tall while "Common Knowledge of Godzilla" says the original Varan weighs 25,000 tons for no reason. We can safely ignore these one-offs, and treat these as official.

The majority of sources we have available from 1993 and onward say the Heisei KG is 140 meters tall and has a wingspan of 150 meters, though 2 contemporary books released right after "Godzilla vs. King Ghidorah" we have say that they are 150 meters in height, in addition to another 1995 book and the 1998 "The Official Godzilla Compendium," which says that Ghidorah's wingspan is 175 meters as well. Which is correct?

We would've said 150-meter height and 175-meter wingspan, if it weren't for the January 1992 "Battle History of Godzilla vs. King Ghidorah" manga collection saying that Ghidorah and his cyborg form are 140 meters tall. And to add to the beauty, it turns out, 3 of the 4 books that give KG the 150 meter stature ALSO go ahead and give Mecha-King Ghidorah a 70,000 metric ton weight… the same weight as the non-mecha Ghidorah, meanwhile MKG is overwhelmingly said to weigh 80,000 metric tons, including in "The Official Godzilla Compendium" (which says KG is 150-meters tall) and the manga collection (from 1992). So not even sources released immediately in the wake of the film agree?!

Which are the true stats? We'll just go ahead and say that they're this, just because these are the most widely published and contemporary sources seem to be completely unreliable. Still, this mess is nothing when compared to...

Addendum: It turns out that Godzilla vs. Mechagodzilla II shows (albeit briefly) that Mecha-King Ghidorah is in fact 150 METERS tall, not 140 meters. Why did books from 1991/1992 released list 140 meters as the height then? Who knows.

Mothra… oh boy, the Showa Mothras. The whole thing is confusing to the point to it being impossible to keep up with unless it's laid out on a chart, which I created right here and you can check out for yourself in the description.

Literally none of the Mothra incarnations have any attributes that are kept the exact same from source to source, with the exception of the wingspan of the 1961 Imago, which is said to be 250 meters every single time. Since a lot of the time, the 135 meter wingspan is attributed to the Imago Mothras in the Godzilla films, it seems clear that Mothra was made to have shrunk in size between the 1961 "Mothra" and "Mothra vs. Godzilla." A lack of specificity on this, and a lack of specification on the later Mothra larvae being 53 or 40 meters created a gigantic mess which spiraled out of control.

The weights are by far the most erratic attributes that these Mothras have. Perhaps the most ridiculous thing in this whole chart is one book stating that the 3rd Generation Mothra is "between 40 and 100 meters," whatever that means. Hilariously, the Mothra eggs have more reliable stats than any of the Showa Mothras. The 1961 egg is 100 meters in long diameter and weighs 50 metric tons, and the 1964 egg has a 50 meter diameter and 65 metric ton weight. Isn't that the saddest part?

Thanks to the "Mothra vs. Godzilla" manga from May 1964, hope is not completely lost. At the beginning, the manga says that Mothra's wingspan is 250 meters, the Larva's length is 180 meters, and even mentions the egg being 100 meters long… all stats consistent with the original "Mothra" film and not "Mothra vs. Godzilla." "Hold on," you might say. "Doesn't that disprove that the Mothras were scaled down in 1964, since this says they're the same size?" It would seem so superficially, but these numbers begin making sense if you come to the realization that Toho didn't adjust the stats until afterward. This manga was published within only a month after the movie's release, after all, and was definitely in production before that. In other words, these stats were the ones the manga-creators were given by Toho as they were the only ones available at the time. Whether that means that Toho changed them after the manga began production or even months after the movie came out, it's what best explains this all, and it's what best lines up with the trends in our chart.

That, or there is literally no consistency whatsoever and it is 100% impossible to tell the true sizes of the Showa Mothras. We favor the former explanation.

Baragon is kind of a similar case to Varan, where his size changed between his debut movie to "Destroy All Monsters." Again, the 1968 "Destroy All Monsters" Baragon is separate from the 1966 "Frankenstein vs. Baragon" Baragon. Anyways, the majority of the time the '68 Baragon is said to be the same height as the '65 Baragon: 25 meters. However, some sources state that the Monsterland Baragon is actually 5 meters shorter, including the same Asahi Sonorama book from 1968 which confirmed that the Monsterland Varan was 10 meters. It seems to have been the intended height for him at the time of the film's release, and was lost to time just like Varan's height.

While the original King Kong doesn't actually fit the parameters we set for this video—since his problem is on-screen scaling—he is the most important and arguably the most blatant case of this, so we'll go ahead and talk about him here.

So, to begin with, King Kong creator Merian C. Cooper originally imagined Kong as being "40 to 50 feet tall," and this is reflected in promotional materials of the movie where he's said to be 50 feet. However, stop-motion animator for the film Willis O'Brien and his crew made the sets and models so that Kong was way smaller than his original envisioned height, instead appearing to be 18 feet on Skull Island and 24 feet in New York City.

However, Cooper still used camera tricks such as changing the camera angles to make Kong's height adjust to whatever feeling he wanted to convey in each scene. As a result, Kong's size ranged from 18 to 60 feet across the stop-motion segments, and Mr. Cooper justified it by saying that he "felt confident that if the scenes moved with excitement and beauty, the audience would accept any height that fitted into the scene. [sic] The one essential thing was to make the audience enthralled with the character of Kong so that they wouldn't notice or care that he was eighteen feet high or forty feet, just as long as he fitted the mystery and excitement of the scenes and action."

In addition, the giant Kong head used in the movie is on scale with a 40 foot Kong, and the giant hand was on the scale of a 70 foot Kong, meaning that across the original film, the giant ape's height fluctuates from smaller than the Peter Jackson Kong to a bit taller than the 1967 "King Kong Escapes" incarnation, all the while his official given height is 50 feet.

Honestly, this isn't that ludicrous when you remember that Gorosaurus is apparently 35 meters tall in "King Kong Escapes" even though he's the same exact size as the 20-meter King Kong. Or wait… hmm...