The Third Generation Mothra (三代目モスラ,   Sandaime Mosura) is a giant divine moth larva kaiju that appeared in the 1968 Godzilla film, Destroy All Monsters.

A larval Mothra living on Monsterland at the end of the 20th century, she assaulted Beijing after the Kilaaks invaded the island and took command of the monsters. Mothra then appeared alongside Godzilla, Rodan and Manda in Tokyo, as the monsters ravaged the city under the invaders' orders. When humanity freed the monsters from the Kilaaks' control, Mothra was present along with the other monsters at Mount Fuji for the final battle against King Ghidorah. Mothra did not take direct part in the battle, but helped Kumonga cover King Ghidorah's body in silk after he was defeated.

Multiple models were used to depict Mothra in Destroy All Monsters. A self-propelled prop was utilized for the scene where she destroys a train outside of Beijing, and a wooden miniature model was used for the scene where she emerges from the subway station in Tokyo. These and other models of various sizes were used for different scenes in the film, but it is unclear if they were newly constructed or reused from previous films.[2]

The Third Generation Mothra closely resembles the larval stage of the previous Mothra, featuring the smooth brown body and red eyes. However, this Mothra features some differences of its own. She sits much lower off the ground than previous incarnations and appears shorter in length. Her body is an even darker shade of brown than the Second Generation Mothra. Her head is very small, with the forehead not even coming up to the top of the body. The sockets around Mothra's eyes are slightly more rounded but less deep, making the eyes more plainly visible.

This Mothra does not have much of a defined personality. She is only ever seen wandering Monsterland in the vicinity of Gorosaurus, causing destruction under the control of the Kilaaks, and assisting Godzilla and the other Earth monsters against King Ghidorah by covering his body in silk.

This Mothra's origins and relation to previous Mothras are unknown. This Mothra is only shown living on Monsterland near the end of the 20th century, and the Shobijin are nowhere to be seen. 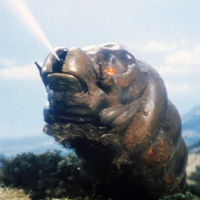 Mothra in Destroy All Monsters

By the end of the 20th century, a larval Mothra was living on Monsterland along with most of Earth's other kaiju. When the Kilaaks invaded the island, they took control of the monsters and sent them to attack major cities around the globe. Mothra first attacked Beijing, and later resurfaced in Tokyo along with Godzilla, Manda and Rodan. The four monsters completely leveled the city before departing. Thankfully, mankind destroyed the Kilaaks' mind-control device and the Earth monsters assaulted the Kilaaks' lair at Mount Fuji. The Kilaaks summoned King Ghidorah to fight off the Earth monsters. Mothra aided in the fight from afar, covering King Ghidorah in webbing alongside Kumonga. When King Ghidorah and the Kilaaks were defeated, Mothra and the other monsters were returned to Monsterland to live out their days in peace.

The Mothra in Destroy All Monsters does not display many unique abilities, as she only partakes in combat by spraying silk at King Ghidorah alongside Kumonga. While under the control of the Kilaaks, Mothra simply utilizes her gigantic size to cause destruction by crawling directly into a train and later smashing through a subway station.

This is a list of references for Mothra/Third Generation. These citations are used to identify the reliable sources on which this article is based. These references appear inside articles in the form of superscript numbers, which look like this: [1]

14 months ago
Score 0
Yeah, I would've said something, but I wasn't exactly 100% sure on how to word it. (*My stinkin' Asperger's gettin' in the way, again!!!*)
Permalink
You are ignoring the author of this comment
Show comment | Manage ignore list

"This Mothra does not have much of a defined personality."

3 months ago
Score 0
F for Mothra
Permalink
↑ back to top ・ contents
Retrieved from "https://wikizilla.org/w/index.php?title=Mothra/Third_Generation&oldid=180312"
Categories: