The Gorosaurus kaiju profile is the 24th episode of Wikizilla's Kaiju Profiles video series. It was uploaded on March 25, 2018. 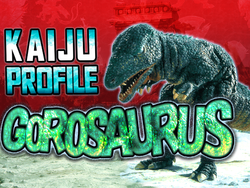 Hello kaiju fans, it's The Boy Who Cried Godzilla, and today we'll be looking at the Marvelous Atomic Dinosaur: Gorosaurus!

Gorosaurus is a dinosaur descended from Allosaurus that debuted in "King Kong Escapes" and returned in "Destroy All Monsters," as well as the shows "Go! Godman" and "Godzilla Island." Gorosaurus has since popped up in several other forms of media, including a handful of video game and comic appearances. One of these includes the GODZILLA anime trilogy through its prequel novel, "GODZILLA: Monster Apocalypse." Portrayed by Hiroshi Sekita, the monster exhibits simple animalistic behaviors, though in "Destroy All Monsters" he shown as capable of strategizing and coordinating with the other Earth monsters in the final battle against King Ghidorah.

Monster-maker Nobuyuki Yasumaru modeled the Gorosaurus suit himself, aiming for it to feel like a living creature. Gorosaurus' design is an homage to the T-rex which appears in the original 1933 "King Kong."

Gorosaurus stands upright with his tail dragging on the ground, and possesses a large head, muscular legs and short arms. His skin is covered in thick, scaly bumps, and he sports a spike on the tip of his tail. In "King Kong Escapes," Gorosaurus' skin is mostly blue in color, while his chin is red that fades into a lighter desaturated yellow in the underside of his tail and belly. In "Destroy All Monsters," the dinosaur's coloration is more muted.

By "Go! Godman," Gorosaurus' suit was is very poor shape, with its inner support seemingly deteriorated making its torso appear to be caving in, and its jaw hanging at a slight angle.

In "King Kong Escapes," Gorosaurus (a descendant of the Allosaurus) was reawakened from the volcanic heat on Mondo Island and was living there in the modern day. The "Destroy All Monsters" incarnation was one of the various kaiju contained on Monsterland at the end of the 20th century. According to several external sources, the different Gorosauruses featured in both "Destroy All Monsters" and "Go! Godman" have similar origins to the original "King Kong Escapes" incarnation, all being prehistoric dinosaurs from Mondo Island.

King Kong Escapes: When Carl Nelson and his fellow crew members Jiro Nomura and Susan Watson disembarked from their ship on Mondo Island, Susan drew the attention of Gorosaurus, who attempted to eat her. Susan's screams caught the attention of King Kong, who emerged from his cave to rescue her. Kong began grappling with Gorosaurus, and the ape gained the upper hand and pummeled the dinosaur into submission. However, just as Kong tried to walk away, Gorosaurus regained consciousness and clamped his jaws on Kong's leg. Kong was able to pry Gorosaurus' jaws apart, then defeated him by breaking his jaws.

In "Destroy All Monsters," Gorosaurus is one of the Earth monsters inhabiting Monsterland at the end of the 20th century before being taken control of by the Kilaak aliens. Gorosaurus is deployed in Paris, where he burrows beneath and destroys the Arc de Triomphe, and is later called back to the Kilaak base at Mount Fuji to defend it. After the aliens' mind control over Gorosaurus and the other monsters is severed, King Ghidorah is sent to Earth to battle them. The dinosaur ultimately aids Godzilla, Minilla, and Anguirus in finishing off the space monster, landing a devastating blow on King Ghidorah's back. After the destruction of Ghidorah and its alien masters, the kaiju are returned to Monsterland to live out their days.

In "Go! Godman," Gorosaurus appears in a small town and begins to, somewhat peacefully, roam around. Godman is called upon to defeat the rampant monster, and they engage in a long fight through the city. Godman eventually bombards Gorosaurus with several God-Circles, just before finishing the monster off with his Supersonic Wave attack.

Gorosaurus prefers to fight primarily by biting his foes. He can also utilize his tail like a spring to propel himself forward or up to 30 meters into the air.

Kangaroo Kick: Additionally, Gorosaurus can use his spring-like tail to perform a powerful kicking attack, dubbed the Kangaroo Kick. Gorosaurus used this technique in both of his film appearances, knocking King Kong to the ground with it in "King Kong Escapes" and devastating King Ghidorah with a kick to the back in "Destroy All Monsters."

Burrowing: In a similar manner to Baragon, Gorosaurus is able to burrow underground. This was ultimately displayed in "Destroy All Monsters," when Gorosaurus burrows underground and emerges beneath the Arc de Triomphe, destroying it.

In a "What If?"-type scenario included at the end of the book "Godzilla 1954-1999 Super Complete Works" Monsterland is shown to be an archipelago of several smaller islands, and Gorosaurus is seen living peacefully with other members of his species on an island dubbed 'Dinosaur Island.'

The scene in which Gorosaurus destroys the Arc de Triomphe in "Destroy All Monsters" was originally intended for the walrus-like kaiju Maguma in some screenplays for the film, and later Baragon. According to some Japanese sources, Baragon was replaced in this scene due to the suit's ears proving to be a difficulty during filming of the scene and thus he was swapped out for Gorosaurus. According to kaiju authors and historians Steve Ryfle and Ed Godziszewski in the audio commentary on the "Destroy All Monsters" Blu-ray, storyboards for the film have Gorosaurus drawn into the scene from the beginning, and preliminary set designs done by art director Yasuyuki Inoue also list Gorosaurus appearing in the scene. As a nod to this, Baragon appears in Paris in issue #11 of the IDW comic series "Godzilla: Rulers of Earth" and destroys the Arc de Triomphe in the same fashion.

That's all we have for Gorosaurus. Thanks for watching!