The Ready Player One Mechagodzilla kaiju profile is the 61st episode of Wikizilla's Kaiju Profiles video series. It was uploaded on September 1, 2020. 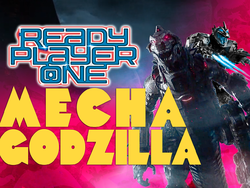 Hey kaiju fans, I'm Koopa. More than two years after the movie came out, we finally came to our senses and decided to profile the Mechagodzilla from "Ready Player One"!

Since Mechagodzilla doesn't show up until the end of Ernest Cline's book and Steven Spielberg's movie, a bit of context is necessary. It's the mid-2040's, and Earth has become a pretty miserable place. Most of humanity can only find solace in the OASIS, a virtual reality massively multiplayer online game. Five years ago, OASIS creator James Halliday passed away, but revealed in a prerecorded message that he hid an Easter egg in his game for the world to hunt for. The first person to find it will inherit his entire fortune and absolute control of the OASIS. Innovative Online Industries, the world's leading Internet service provider, has an entire department dedicated to finding the egg so they can relentlessly monetize the game. Opposing IOI, but also competing amongst themselves, are a motley crew called gunters, who study the pop culture of Halliday's Eighties adolescence for clues. Of course, IOI doesn't play fair, trying to assassinate the most prominent gunters in both the OASIS and the real world. Mechagodzilla is one of the company's in-game trump cards, an incredibly powerful artifact possessed by Nolan Sorrento, the company's head of operations.

In the "Ready Player One" book, Mechagodzilla simply looks like Kiryu, although it's unclear whether it's the original model from "Godzilla Against Mechagodzilla" or the modified version in "Godzilla: Tokyo S.O.S." For consistency’s sake, this video will represent it with the latter.

Jared Krichevsky designed a new Mechagodzilla for the film adaptation. Toho Kingdom President Joshua Sudomerski spoke with him shortly after its theatrical run began—I'll let him explain what he learned.

Regarding why Kiryu or another pre-existing design wasn't used, he could only assume it was due to legal reasons. He actually submitted his own original MG designs early on, but was requested to make some that were closer to the "classic" (Showa) incarnations. As expected, Toho had to approve of everything sent in, so he had to find the happy medium between something Steven Spielberg wanted and something Toho would permit. He also mentioned how Digital Domain did a lot of work when it came to making the final design "pretty different looking."

Brought up to him how people have noticed the similarities between his design to Noriyoshi Ohrai's 1993 poster Mechagodzilla, and it turns out it wasn't entirely unfounded - surprisingly, it was per Toho's request! They forwarded Ohrai's work to him and said, "make it like this."

Unsurprisingly, this Mechagodzilla was a completely computer-generated character. Like everything else in the OASIS, it was animated by Industrial Light and Magic. Oh, and while it may or may not have been intentional, the magnificent machine also ended up resembling the MonsterVerse Godzilla, right the way down to its breath weapon. A glimpse into the future? Maybe.

Sorrento saved Mechagodzilla for the endgame. IOI had reached the final stage of Halliday's challenge, located in his abandoned castle. They were stumped, but to make sure no one else could figure it out first, they set up an impenetrable force field around the stronghold. Out of options, the top gunters—Parzival, Art3mis, Aech, and Shoto, plus Daito in the movie—joined forces. Contacting the entire OASIS, Parzival raised an army. In the book, he also managed to bring down the shield by infiltrating IOI in the real world, while Art3mis pulled it off in the film. The stage was set for a robot battle for the ages.

[Audiobook narration:] "They all recognized this giant metal behemoth. And they all knew it was nearly indestructible." [Movie clip:] "Mechagodzilla!"

Unencumbered by budget or licensing costs, Cline let all his heroes pilot vintage mechs, obtained from an earlier phase of Halliday's challenge: Parzival in Leopardon, Art3mis in Minerva X, Aech in an RX-78 Gundam, and Shoto in Raideen. Other IOI agents backed up Mechagodzilla in fighter mecha from "Robotech," Evangelion units, and the Lions of Voltron, but fell quickly to enemy fire. Nothing short of Minerva X's Breast Fire and Raideen’s God Breaker could dent Mechagodzilla, who retaliated with lightning from its mouth. The ray killed Shoto's avatar in Raideen and destroyed Leopardon too, though Parzival managed to eject in time. Mechagodzilla pursued him, but rather than fly into the safety of the castle, he decided Sorento needed to be humbled. Using a rare artifact called the Beta Capsule, he transformed into Ultraman. The damaged mech was no match for the giant hero, who cleaved it in two with an Ultra-Slice. Sorrento ejected in Mechagodzilla’s head, but Ultraman took him out with his signature Specium Ray.

Spielberg wanted Ultraman for the movie as well, but Tsuburaya and UM Corporation were still embroiled in a legal battle over who owned the international rights to his show. Here's what Cline and Zak Penn came up with instead: Aech activated his custom Iron Giant for the final battle, while Daito used an artifact to turn into an RX-78 Gundam for two minutes, a nod to Ultraman's three-minute Color Timer. The Iron Giant was no match for Mechagodzilla, who knocked him aside before unleashing its flamethrower. Before Parzival and Art3mis could slip past it, a tail whip totaled his DeLorean. Daito entered the battle as they tried fleeing on foot. Art3mis headed towards the Iron Giant while Parzival and Shoto continued towards the castle. Though the Gundam was an even match for Mechagodzilla, landing some solid hits with his Beam Saber, the time limit proved to be Daito's downfall. As he stood defiant, Mechagodzilla vaporized him, then trained its finger missiles on Parzival and Shoto. Just then the Iron Giant leapt onto its back, causing its shots to go wild. With Art3mis in the palm of his hand, he held the mech's head in place long enough for the gunter to shoot out one of its eyes with her pulse rifle. Before Sorrento could react, she tossed a Madball grenade through the hole, killing his avatar and destroying Mechagodzilla.

Despite looking like Kiryu, the Mechagodzilla in the book handled quite differently. Sorrento relied exclusively on its blue lightning weapon. Though lethal against everything it touched, it also had a cooldown period. That reflected the machine itself; Parzival observed that "[t]he Mechagodzilla's slow movement and attacks counterbalanced its seeming invulnerability." The more agile Ultraman obliterated it without taking a hit.

The movie Mechagodzilla was also a flawed juggernaut. It easily bested the Iron Giant and held its own against a giant Gundam, despite Daito's mech having a shield that could reflect its flamethrower and a deadly melee weapon. Its finger missiles even had a targeting system, which is more than could be said of the Showa Mechagodzilla. However, its eyes and innards proved to be extreme vulnerabilities.

Face the Music: There's actually a third version of the "Ready Player One" Mechagodzilla. GUNSHIP's "Art3mis & Parzival" music video, released a few weeks before the movie, uses sprite art to tell the story in five minutes. Evidently free of Toho's oversight, Jason Tammemagi recreated the Showa Mechagodzilla for the finale. It wiped out Leopardon and Minerva X before Parzival went Plus Ultra. Mecha-G managed to fire its finger missiles, but didn't last long after that.

With "Ready Player Two" due in November, the story of the OASIS isn't over, but that's all we have for now on its virtual Mechagodzilla. Hopefully this clears up a thing or two. Smiley face. Thanks for watching!