The Manda kaiju profile is the 54th episode of Wikizilla's Kaiju Profiles video series. It was uploaded on December 25, 2019. 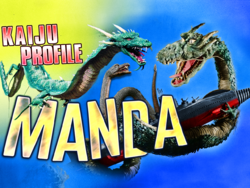 Hey kaiju fans, I'm Koopa, and your long wait is over. We're going to do Manda.

Introduced in 1963's "Atragon" at the behest of producer Tomoyuki Tanaka, Manda was worshipped by the advanced undersea civilization of Mu for thousands of years, with statues and even weapons built in his honor. Despite appearing in two Godzilla movies since then, with prominent billing in American promos for "Destroy All Monsters", the Guardian of Mu has struggled to make a name for himself. Put simply, the dragon has a tendency to freeze: literally during his bouts with the Gotengo, and figuratively when King Ghidorah came calling.

Originally, the kaiju featured in "Atragon" was given the name "Mammoth Snake," then "Mammoth Serpent." However, since 1964 would be the Year of the Dragon in the Japanese zodiac, Toho decided to change his design accordingly. Yes, I know I just said "Atragon" was a 1963 film, but it premiered on December 22, so its theatrical run extended into 1964. Anyway, Manmosu Da was shortened to "Manda."

The monster was designed by Akira Watanabe, while his head was modeled by Teizo Toshimitsu and his body by the Yagi brothers. They built at least two different Manda props for the movie, ranging in size from twenty centimeters to five meters. The five-meter puppet had a radio-controlled jaw. The monster's growl was created by altering the roar of a lion, though neither U.S. distributor was impressed with it. When AIP brought it to American theaters, they added more sound effects, including hisses originally emitted by Reptilicus. Media Blasters gave him a completely new roar for the English surround mix on its 2006 "Atragon" DVD.

Tsuburaya Productions later used one of the large Manda props to portray the Kai Dragon in episode 6 of "Ultra Q." A smaller prop turned up as the figurehead of a ghost ship in episode 12. For "Destroy All Monsters," Tsuburaya Productions returned the larger Manda prop to Toho, where it was given a new, less ornate head. The reason for this change is unknown, though it made him look more like a sea serpent. A small model of Manda was also created for long shots.

Manda's next screen appearance came over three decades later in "Godzilla: Final Wars." Shinji Nishikawa designed the new Manda, aiming to incorporate elements of marine life into the design while restoring his draconic features. He specifically shied away from the interpretation of the monster from "Atragon"; a Manda "without the divinity," as he described it. A six-meter-long, wire-operated physical prop of the dragon was created by a team which included prolific Heisei-era modeler Tomoki Kobayashi. He passed away in 2009, cementing Manda as the final monster of his career. Most of the kaiju's shots were achieved through CGI however, and a blast model was utilized to depict the frozen Manda getting shredded by the Gotengo.

Atragon (1963): In 1963, the Mu prepared to conquer the surface world they had once ruled. To do so, they needed to destroy the Gotengo, a super-submarine built by rogue naval captain Hachiro Jinguji. One of their agents planted a bomb into the Gotengo's hanger before abducting Jinguji's daughter Makoto and photographer Susumu Hatanaka. They were brought before the Empress of Mu, who ordered them sacrificed to Manda. Through a window in their prison cell, they beheld the monster for the first time. Susumu managed to steal a powerful explosive while working in the Mu mines and used it to hold the Empress hostage. As he, Makoto, and two kidnapped engineers prepared to escape, she set off a charge to release Manda. Before the monster could devour them, the Gotengo distracted him with a barrage of torpedoes and they swam aboard. The Gotengo surfaced so the crew could receive the defiant Empress, then resubmerged to confront Manda. The serpent tried to constrict the submarine, but was repelled by its electrified hull. As he recovered, the Gotengo fired its Zero Cannon at him. Immobilized by the weapon, Manda was powerless to stop the Gotengo's assault on Mu.

Destroy All Monsters (1968): By the end of the 20th century, a second Manda was among the ten inmates on Monsterland. When the Kilaaks seized control of the island's inhabitants, they sent Manda to destroy London offscreen. Later on, he came ashore in Tokyo, helping Godzilla, Mothra, and Rodan destroy the city. Humanity soon destroyed the Kilaaks' control devices and used their own to send the monsters to Mt. Fuji to smash the aliens' base. Manda sat on the sidelines with Baragon and Varan during the climactic battle between King Ghidorah and the rest of Earth's monsters. After Ghidorah and the Kilaaks were destroyed, Manda and the others returned to Monsterland to live out their days in peace.

Stock footage of Manda from "Destroy All Monsters" appears in "All Monsters Attack" and "Terror of Mechagodzilla." The latter should set off another Showa Continuity Alert for you, as Katsura is recalling an attack which hasn't actually taken place yet.

Godzilla: Final Wars (2004): Manda faced the Earth Defense Force's flagship, Gotengo, off the coast of Normandy. Coiling around the submarine and dragging it into deeper waters, the sea dragon inflicted massive damage. Out of options, Captain Gordon ordered the Gotengo towards a nearby undersea volcano. The intense heat set Manda ablaze and forced him to release the Gotengo. As he chased after it, Gordon called for his ship to turn 180 degrees and fire its Zero Cannon. The ray froze Manda solid, allowing the Gotengo's drill to shatter him.

Manda's most obvious form of attack is constriction, though he didn't get a real chance to demonstrate it until "Godzilla: Final Wars," in which it is dubbed the Binding Breaker. If not for that conveniently-placed volcano, his plan to crush the Gotengo might well have succeeded.

Amphibiousness: Manda is more nimble in the water, especially his "Final Wars" incarnation. However, the second-generation version has no trouble spending time on solid ground. The publication "Godzilla Dictionary: New Edition" states that his land speed tops out at 100 kilometers per hour, so apparently he was just slacking off in "Destroy All Monsters."

Weaknesses: The only hardships Manda shrugged off, at least in his films, were the Gotengo's torpedoes. Manda proved susceptible to electricity, extreme heat, and of course extreme cold.

Godzilla vs. Manda: A deleted scene from "Destroy All Monsters" included in the 1986 documentary "Toho Unused Special Effects Complete Collection" has Godzilla grabbing Manda in the middle of his rampage through Tokyo. Whoever removed it probably made the right call, considering that both monsters are supposed to be under the Kilaaks' control.

"Atragon 2": Manda crawled onto land again in the unreleased Japanese fan film "Atragon 2", directed by Masahiko Katto. This was one of the independent productions that was supposed to be profiled in "Kaiju Gaiden", which also might go unreleased, so we don't know much of anything about the plot or even exactly when it was made.

Video Games: Manda first appeared in "CinemaScope War Game: Atragon" for the PC-8801 and FM-7 in 1984, beating most of his fellow Toho kaiju to the world of video games. He's returned for close to a dozen games since then, though almost never as a playable character. Prominent villain roles include "Godzilla: Monster of Monsters," where he pops out of volcanoes to spit fireballs at the player, and "Godzilla Unleashed: Double Smash," where he's a jumbo-sized boss in the Atlantis level.

Books: Manda appears in three of Random House's Godzilla books. In "Godzilla Likes to Roar!" and "Who's Afraid of Godzilla?," he's just a background character, but the young adult novel "Godzilla At World's End" gave him some time in the spotlight, taking on Godzilla in Shanghai. He would have returned for "Godzilla and the Lost Continent," had the commercial failure of "GODZILLA" '98 not made it unpublishable. He also turns up in Renji Oki's prequel novels for the anime trilogy: In "Monster Apocalypse," he began terrorizing the Atlantic Ocean in 2022, armed with a Supersonic Wave Cannon. The Goten finally brought him down in the Strait of Dover in 2039. A second Manda surfaced in the Persian Gulf in the 2040's, terrorizing United Earth engineers engaged in "Operation: Great Wall."

Comics: In the 1964 Shōnen Book "Atragon" manga adaptation, Manda reverted to a snake-like design. The Manga King "Destroy All Monsters" adaptation actually showed him attacking London, and he even worked up the nerve to help fight King Ghidorah. Part 4 of the early 70's manga "Monster of Justice Godzilla" serialized in TV Magazine had Manda wrap around a mo'ai while spitting strange rays at Mothra. Godzilla promptly arrived and tore him apart at the neck, saving a pair of pandas from Manda's grasp! The monster also features in a couple of Asahi Sonorama publications. In the picture book "Giant Dragon Manda," he wreaks havoc across the globe beside Gabara and Moguera.

As for IDW comics, Manda appears via flashbacks in "Godzilla: Cataclysm," where he unwisely tried to constrict Anguirus and received a thrashing from King Ghidorah. A couple of panels from "Godzilla: Rage Across Time" #5 also showed him battling Titanosaurus. Manda was given a more significant role in "Godzilla: Rulers of Earth," where he was a pawn of a different underwater civilization - the Devonians. After getting curb-stomped twice by the Big G while fighting alongside other Devonian-controlled kaiju, Manda dropped off the radar, but the Trilopods evidently tracked him down.

That's all we have on Manda. You can learn more about him and his costars over at wikizilla.org. Thanks for watching!