The Giant Octopus kaiju profile is the 37th episode of Wikizilla's Kaiju Profiles video series. It was uploaded on October 30, 2018.

Written by Astounding Beyond Belief, Les, Surf Kaiju, Titanollante
Edited by Titanollante
Voiced by The Boy Who Cried Godzilla 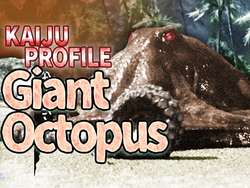 Hey kaiju fans, it's The Boy Who Cried Godzilla, and today we'll be taking a look at the Devil of the Sea: the Giant Octopus.

The Giant Octopus is a non-sequitur in the shape of a monster. It appears without explanation to fight an oversized primate in three Toho movies from the 1960's—"King Kong vs. Godzilla," the alternate ending of "Frankenstein vs. Baragon", and "The War of the Gargantuas"—then vanishes just as mysteriously. Toho has never given this creature a proper name; even "Ōdako" is just how you say "giant octopus" in Japanese. Still, it has been more prolific onscreen and off than its nameless compatriots, like the Giant Condor and the Giant Sea Serpent.

No one involved in the planning stages of "King Kong vs. Godzilla" talked about including a third monster. It came as a bit of a surprise when Shinichi Sekizawa submitted a screenplay with a Giant Octopus scene. For special effects director Eiji Tsuburaya, however, it must have felt serendipitous. Back in 1951, Tsuburaya had actually written an outline about "a giant mutated octopus attacking Japanese fishing vessels in the Indian Ocean." When producer Tomoyuki Tanaka announced he wanted to make a monster movie three years later, Tsuburaya submitted the outline, and Shigeru Kayama worked parts of it into his story treatment. The name of that movie, of course, was "Godzilla." Now Tsuburaya had a chance to bring his original idea to life, and he tore into the challenge with his usual creativity.

The Giant Octopus is the only Toho kaiju to be portrayed by a real animal—several of them, in fact. Though the octopi looked quite impressive crawling around a miniature set, getting them to move at all was no easy task. As assistant special effects director Teruyoshi Nakano remembered, "We threw the octopus on the table and poked him with a stick, threw water on him, and blew air on him, but it wouldn't move. No matter how hard we did it, it wouldn't move. We even tried to use cigarettes!" Finally, someone came up with the idea of using lighting equipment and a pin filter to shoot the octopus with a beam of light. Once the shots were finished, the crew released some of the animals... and ate the rest.

For the scenes where King Kong suit actor Shoichi Hirose was required to tussle with the octopus, a rubber puppet was instead used. Several full-sized tentacle props also flail around during the battle with the Farou Islanders. Finally, a stop-motion tentacle appears during the Octopus' siege, picking up a Farou Island warrior and throwing him.

Keizo Murase and brothers Kanju and Yasuei Yagi built a larger Giant Octopus puppet for the would-be American ending to "Frankenstein vs. Baragon." The film was a co-production with UPA, led by Henry Saperstein. During post-production, he requested that Honda and Tsuburaya shoot a new ending involving a giant octopus, since the creature's portrayal in "King Kong vs. Godzilla" had been impressive. Honda, for one, thought that "Putting the octopus in a lake in the mountains was very awkward." Famous Monsters of Filmland initially reported the title as "Frankenstein vs. The Giant Devilfish" and published photos of the artificial human dueling the cephalopod. However, when AIP distributed the film as "Frankenstein Conquers the World," they used the original ending where Frankenstein plummets into a fissure. Saperstein said the new octopus, quote, "wasn't that good," and the ending remained unreleased until it accidentally aired on Japanese television in 1983. Both Toho and Tokyo Shock have since made it available on home video.

Saperstein managed to get the same octopus prop in "The War of the Gargantuas," another UPA co-production—this time, its scene remained in both the Japanese and American versions. The prop hadn't changed much, aside from the lights installed in its eyes, which were controlled using a variable autotransformer. More full-sized tentacles allowed it to menace the sailors. Around the same time, Tsuburaya Productions used the prop to depict Sudar in episode 23 of "Ultra Q," accompanied by stock footage from "King Kong vs. Godzilla." Tsuburaya brought it back again two years later for episode 14 of "Fight! Mighty Jack."

King Kong vs. Godzilla: The Giant Octopus embarked on a nighttime raid of Farou Island's stockpile of Farolacton juice. The screams of young Chikiro and his mother inside the hut where the juice was stored drew the attention of the rest of the islanders and two representatives from Pacific Pharmaceuticals. As Chikiro and his mother escaped, they held off the octopus with spears, rifles, and torches. The sounds of battle attracted the islanders' god, King Kong. The octopus latched onto his face when he picked it up, but he quickly threw it back to the ground. After Kong pelted it with a pair of rocks, it fled back to the sea.

Frankenstein vs. Baragon: No sooner had Frankenstein killed Baragon than he faced another monstrous opponent. He greeted the Giant Octopus with a barrage of rocks, then made the mistake of trying to grapple with it. Slowly, it dragged him downhill and into a lake, then pulled him underwater. He never surfaced.

The War of the Gargantuas: The Giant Octopus targeted the crew of a cargo ship on a dark and stormy night. Before it could devour them, it was attacked in turn by Gaira, who wanted the sailors for himself. Gaira threw the devilfish into the sea after a brief scuffle, which was enough to convince it to withdraw.

Physical Capabilities: The Giant Octopus attacks enemies with its eight tentacles, and that's about it. This was an effective tactic against the smaller Frankenstein, but King Kong and Gaira easily overpowered it.

Terrain Master: Real octopi rarely travel onto land, but the Giant Octopus seems to have no qualms about doing so for extended periods of time. Of course, as Frankenstein learned, it's more dangerous in the water.

Renji Oki's novel "GODZILLA: Monster Apocalypse" mentions several Giant Octopi in passing. During the early 21st century, the first of these creatures carried out a modest reign of terror in the Pacific Ocean, sinking two to three ships every year.

In a 1994 interview with David Milner, Teruyoshi Nakano recalled that the villainous kaiju in "Ebirah, Horror of the Deep" was originally a giant octopus. Since no other source we know of corroborates this, he may have been thinking of Shinichi Sekizawa's original plans for "All Monsters Attack," which included a battle between Godzilla and the Giant Octopus. Budget cuts forced Toho to replace it with stock footage from "Ebirah, Horror of the Deep."

The original draft of "Godzilla: Final Wars" by Shogo Tomiyama and Wataru Mimura featured several monsters that didn't make the final cut: Mechagodzilla, a Mothra larva, Gorosaurus, and the Giant Octopus. Concept art of the octopus exists, looking exactly as it did in "Frankenstein vs. Baragon." Its role in this version of the film is unknown.

Though Godzilla has yet to fight the Giant Octopus in a Toho movie, he did tangle with a giant octopus in "Ghost Ship," the 16th episode of his Hanna Barbera cartoon.

The Giant Octopus' only video game appearance comes in "Godzilla: Heart-Pounding Monster Island!!" for the Sega Pico. If you can get a coconut to fall on its head, it will fire a glob of ink at Godzilla and laugh at his misery. Tapping on the Octopus leads to a minigame in which it quizzes you about its tentacles.

The Giant Octopus ending of "Frankenstein Conquers the World" seems to be canonical in at least one universe: the Kiryu Saga, as laid out in the book Godzilla X Mothra X Mechagodzilla: Tokyo SOS Fantastic Collection.

When working on "Pirates of the Caribbean: Dead Man's Chest," animation supervisor Hal T. Hickel and his team struggled with Davy Jones's tentacle-beard. Unable to find documentary footage of octopi on land, Hickel used the Giant Octopus scene from "King Kong vs. Godzilla" as a reference instead.

Kong battles another cephalopod, the Mire Squid, in "Kong: Skull Island." In an interview with Toho Kingdom, director Jordan Vogt-Roberts said this scene was an homage to "King Kong vs. Godzilla."

That's all there is for the Giant Octopus. Thanks for watching.