The Varan kaiju profile is the 2nd episode of Wikizilla's Kaiju Profiles video series. It was uploaded on December 25, 2016.

This video corresponds to Varan in general. 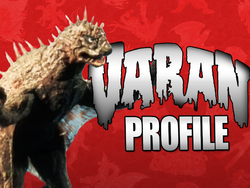 Hey there kaiju fans, Titan here, with a kaiju profile on Varan, the unbelievable!

Varan debutted in Ishiro Honda's "Varan," where he lived in a mountain lake in Japan's Yamanaka region, worshipped as the god Baradagi. Varan weighs 15,000 metric tons, and stands at 50 meters, the same height as the original Godzilla.

While he has only ever been designed with brown skin, it's interesting to note the official movie poster showed him with a blue-ish gray color. Also, Varan is always depicted as having a short snout on a head covered with spikes that descend down his back and tail. His cheeks have three additional spikes that point backward toward his body, and the very top of his head has a few more. Varan is further equipped with five digits on each hand, and a thumb on his otherwise four toed feet. His most notable feature however, are the flaps of skin beneath his arms that allow him to glide.

According to characters in the film, Varan is a type of Varanopode dinosaur that lived at the bottom of a mountain lake for so long that he came to be worshipped as a Shinto Sanjin, or mountain spirit. Other than that, the only other glimpses into Varan's origins that are given are through video game biographies and literature. Godzilla: Unleashed credits Varan as naturally living in solitude. Bandai-Namco's Godzilla: The Game gives Varan's scientific name as Varanus pater, and claims that it is native to the Mesozoic era.

After living for years untold as "Baradagi" in the Yamanaka region's Kitami mountains, Varan became territorial when two scientists ventured too close and killed them. Later, in the wake of a deep fog forming, he rose out of his lake to find humans gathered near it. Being unable to tell that they were there by coincidence, and that they were a rescue party for a child who got lost in the fog, Varan left his sacred ground and decimated their village before retreating back to his lair. News of his existence spread quickly across Japan. Lines of heavy weaponry were set up around his territory, and toxins were released into his lake to force him out of the water. Varan was immediately bombarded with gunfire, but was more interested in two strays from the military convoy who had taken refuge in a cave. While he attempted to attack them, the military launched light bombs at Varan, which proved to be a worthy distraction. In order to see the lights more clearly, Varan climbed out of the valley, and upon seeing the ocean spread his arms and glided to it. On his way to Tokyo, the military tried time after time to stop him with various boats and planes, but none were any use against Varan. Finally, it was decided to drive a truckload of experimental mining explosives right at him. They detonated, but due to their being designed to only explode when inside of something else, they didn't perform to their maximum potential. It was then noticed that Varan was swallowing glowing parachutes with explosive payloads out of the air. They then used the mining explosives on the parachutes, and because of damage caused to his feet by the initial blast followed by immediate bombardment, Varan retreated before exploding.

Oh yeah, and in Destroy All Monsters there is a juvenile Varan living in Monsterland. He doesn't do anything.

In addition to his capability of gliding at speeds up to mach 1.5, Varan has been shown to be virtually impervious to any and all conventional weapons. Also, in Godzilla: Unleashed only, Varan could emit sonic waves that could stagger opponents.

In the 1997 novel Godzilla 2000 by Marc Cerasini, Varan's gliding capabilities are credited to sacs of helium in his skin.

Varan was originally going to play a larger part in Destroy All Monsters, but because his suit had become so deteriorated, only a small, immobile puppet could appear in the film.

Varan was in one of the original drafts for GMK, and was intended to act alongside Anguirus, and Baragon as the nature gods that Godzilla fought in the film.

That was Wikizilla's kaiju profile on Varan. Thanks for watching, see ya next time!