The F-86 Sabre, also known as the Sabrejet, is a transonic jet fighter aircraft originally produced by North American Aviation. In Japan, the F-86 was licensed by Mitsubishi Heavy Industries, who produced it for the Japan Air Self-Defense Force in the 1950s. Due to its popularity and frequent use by the JASDF, the F-86 Sabre was featured in numerous kaiju films produced by Toho in the Showa series, making its debut in the 1954 film Godzilla. Most Sabrejets that have appeared in kaiju films are of the 'F' model, referred to by the JASDF as the Rising Sunbeam (旭光,   Kyokkō).

After laying waste to Tokyo, Godzilla waded back into Tokyo Bay, where several F-86F Sabres were mobilized to fight him, much to the cheers of a group of survivors who had made it to the docks. The jets unloaded their missiles on the giant monster. Irritated by the sudden attack, Godzilla tried swatting the missiles and the aircraft that fired them out of the sky, but the aircraft were too fast for him to hit. Eventually, he had enough of this attempt at stopping him, and disappeared below the waves. With no means to continue the fight against Godzilla, the Sabres returned to base.

F-86F Sabres were deployed to combat Godzilla when he and Anguirus were drawn to Osaka by a huge fire at a refinery. The jets' payload was ineffective in halting Godzilla, who destroyed several of them with his atomic breath before resuming his battle with Anguirus. After Godzilla defeated Anguirus and returned to the ocean, more F-86Fs and a fleet of Lockheed T-33A Shooting Stars were deployed to attack Godzilla when he was discovered on an ice-covered island north of Hokkaido. The jets were successful in burying Godzilla up to his neck in an avalanche, and Shoichi Tsukioka then buried Godzilla completely with a missile from his own plane. 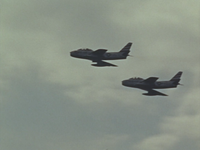 A fleet of F-86F Sabres was sent to attack Rodan. After the Sabrejets struck the side of his home in Mount Aso with their missiles, Rodan was provoked into flying away, and the jets gave chase. While shooting at Rodan with their missiles, some of the jets were brought down by the strong turbulence given off by Rodan's wings. After being hit by a missile from one of the planes, Rodan dove into the water near Saikai Bridge, then rose back out of the water to circle back towards it. Flying over the bridge, Rodan tore it down with gusts from his wings as he flew past, then flew out of range of the remaining Sabre jets.

In this American giant monster film, F-86D Sabres of the USAF engage La Carcagne in battle, but are destroyed by the colossal bird.

F-86Fs of the JASDF repeatedly engaged Dogora in aerial battles during the mutant organism's attack on Earth, most notably in the battle over Fukuoka and during the climactic battle which saw the monster die from exposure to concentrated bee venom.

This is a list of references for Mitsubishi F-86F Sabre. These citations are used to identify the reliable sources on which this article is based. These references appear inside articles in the form of superscript numbers, which look like this: [1]

Would anyone have any photos of the tail fin of the 405 f-86f jasdf sabre as shown above? I need it make a screen accurate scale model of the fighter. I thank you in advance and hope to hear back from someone soon.

7 months ago
Score 0
I checked the scene, and unfortunately that's the only close-up of a model jet in the whole thing. That particular plane gets shot down by the Mysterian Dome moments after the image in the infobox.
Permalink
You are ignoring the author of this comment
Show comment | Manage ignore list

8 months ago
Score 0
Would anyone have any close up photos of the 12.7mm rockets that are on the f-86f Sabre jet fighters? I want to make models of them as screen accurate as possible.
Permalink
You are ignoring the author of this comment
Show comment | Manage ignore list

8 months ago
Score 0
I don't think you'll find much better than the infobox picture.
Permalink
↑ back to top ・ contents
Retrieved from "http://wikizilla.org/w/index.php?title=Mitsubishi_F-86F_Sabre&oldid=172111"
Categories: