From Wikizilla, the kaiju encyclopedia
(Redirected from New York)
Jump to navigationJump to search 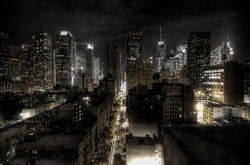 New York City is the largest city in the United States of America. It has been visited by several kaiju in films, television series, and comic books, most famously King Kong. 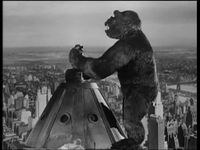 After Carl Denham and the surviving crew members of the Venture managed to subdue the giant ape King Kong and bring him back from Skull Island, Kong was exhibited in a Broadway show and billed as the "Eighth Wonder of the World." During the exhibition, Kong became agitated by a group of photographers taking pictures of Ann Darrow and broke free of his bindings. Kong rampaged through the theater and escaped onto the streets of New York. After destroying a train and scaling several buildings, Kong abducted Ann from a hotel room where she was hiding and proceeded to climb to the top of the Empire State Building. The military deployed a fleet of biplanes armed with machine guns to bring down the beast. Kong set Ann down and swatted at the planes, destroying one of them, but was mortally wounded by machine gun fire. Kong succumbed to his wounds and fell off the top of the building, plummeting to the streets below. As crowds gathered around Kong's body, Denham remarked that it wasn't the airplanes that killed Kong, but that "It was beauty killed the beast."

When the Rhedosaurus was freed from suspended animation in the Arctic due to nuclear testing, the beast made its way to New York. There the monster begun a rampage, smashing vehicles and eating the unfortunate humans in its way. Eventually the military was able to wound the creature enough to make it bleed, driving the monster to retreat. However the fumes from the spilled blood of the creature on the streets were toxic, causing the pursuing soldiers to collapse. After this discovery, a new plan was formed to fire a radioactive isotope into the wound on the Rhedosaurus' neck, killing the creature from inside without the fear of spilling the toxic blood throughout the city. Later, the beast arrived on shore of Coney Island, and started to destroy a nearby roller coaster. After some difficulty, such as a large fire, the isotope was fired into the beast's wound, causing it to collapse and die.

New York City was one of several cities targeted by the Alliance's nuclear missiles shortly after the destruction of Tokyo; a missile detonated over the Hudson River, completely obliterating Manhattan and presumably destroying the rest of the city.

At a meeting at United Nations Headquarters, Dr. Kono presented humanity's two options for avoiding the scourge of the rogue star Gorath: destroy it or move the Earth out of its path. For the latter plan, heavy-water nuclear reactors would provide the necessary energy. Every country with a nuclear program pledged to declassify its research to aid in the operation.

After the Kilaaks invaded Monsterland and took control of the monsters there, they unleashed Godzilla on New York City. He began his attack from the East River, targeting the United Nations Secretariat Building and other nearby structures with his atomic breath.

King Kong is put on display in New York in an open space, bound in chains with a large crown on his head. When Kong sees a group of reporters pushing and shoving Dwan for interviews, the ape breaks free of his bonds, roaring at the crowd as panic ensues. People are trampled as Kong walks through the crowd, including Wilson, who is completely flattened by the ape's foot. Kong grabs Dwan in a Manhattan bar, and climbs the World Trade Center as it reminds him of the mountains in Skull Island. After scaling the South Tower, Kong fights the military while also jumping to the North Tower. Eventually Kong is shot down by helicopters and plummets to the plaza below, seemingly dead.

Godzilla confronts the U.S. military near Central Park in GODZILLA (1998)

After going through Jamaica, the monster dubbed "Godzilla" arrived in New York, causing catastrophic damage either by himself or due to the military accidentally striking buildings trying to hit him. Godzilla burrowed into the city's subway systems to evade the military, and eventually confronted them again near Central Park. Godzilla evaded the military's forces and dove into the Hudson River, where he was pursued by several Ohio Class Nuclear-Powered Submarines. The submarines successfully struck Godzilla with their torpedoes, presumably killing him. Meanwhile, the group led by Niko Tatopoulos and Philippe Roaché discovered Godzilla's nest inside Madison Square Garden, right as the eggs hatched into hundreds of Baby Godzillas. Eventually the babies were killed once the military called in an airstrike to blow up the building. The threat was not over, however, as the adult Godzilla had actually survived and surfaced from under the city streets. Pursuing Nick and his squad, Godzilla ended up trapped by the suspension cables on the Brooklyn Bridge and was shot down by three F-18 Hornets. While the people of New York celebrated the monster's death, one lone egg hatched within the ruins of Madison Square Garden. 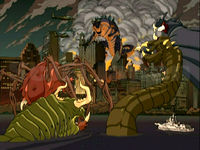 Godzilla confronting other mutations in New York during the opening of Godzilla: The Series

Following Godzilla's death, Niko Tatopoulos and a team of soldiers investigated the ruins of Madison Square Garden to ensure none of the creature's offspring had survived. During the investigation, Nick was separated from the team and fell into a tunnel, where he discovered one surviving egg, which hatched into a baby Godzilla. Rather than attack Nick, the hatchling imprinted on him and believed him to be his father. Nick convinced the hatchling to flee the ruins of the building before the military could find him, and returned to the headquarters of his research team, H.E.A.T., on the shores of the Hudson River. However, the rapidly growing Godzilla followed him there. After running some studies, Nick concluded that the new Godzilla was different from his parent, showing surprising intelligence and loyalty, and had no risk of reproducing. After a failed military attempt to kill him, Godzilla swam away from the city to Jamaica, where he defeated Crustaceous Rex. Having proved his worth, the military allowed Godzilla to live. Godzilla would go on to battle numerous other creatures in New York, including the Mutant Rats, the Chameleon and the Crackler.

The ruins of New York City following attacks by Rodan and the Xiliens in Godzilla: Final Wars

Rodan was sent to New York after the Xiliens began their invasion. He destroyed the city by flying past buildings at super sonic speeds, and was eventually challenged by the Rumbling. He was called back, but released again after X's plan was discovered. He destroyed the Rumbling and the rest of the city.

Similar to the 1933 original, Kong is exhibited on Broadway. Only this time he travels across more of the city with Ann before scaling the Empire State Building.

Clover surfaces from the Atlantic Ocean and attacks New York in confusion, destroying much of the city and killing numerous people. He is eventually killed by the military after countless bombs are dropped on him, destroying the city as well.

As Yuriko describes her grandfather's plans to invade the United States with an army of Umihiko at the end of World War II, a shot of New York City under attack is shown.

New York City, along with a smaller Manhattan map, appears as an arena in Godzilla: Save the Earth.

New York appears as a stage in the game Godzilla: Unleashed, and serves as the final level of the game's campaign for all factions except the Mutants. In this level, SpaceGodzilla emerges from a portal in New York, while monsters from each of the other factions converge on the city as well. If the player plays as a monster other than SpaceGodzilla, SpaceGodzilla is defeated and the crystal incursion ends. Otherwise, SpaceGodzilla is victorious and travels to San Francisco to complete his conquest.

After the space monsters Gigan, SpaceGodzilla, Hedorah and Monster X appeared on Earth, Monster X descended on New York, terrorizing the city. Mothra flew to New York to battle Monster X, but was defeated. After freeing the monsters of Monster Island, Kiryu flew to New York with Kumonga to join the battle against Monster X. Godzilla, having defeated Hedorah, arrived there as well and fought alongside Kiryu and Kumonga. However, SpaceGodzilla defeated Battra and Titanosaurus in London and arrived to support Monster X. During the battle, Kumonga was defeated and Kiryu was knocked into the Hudson River. Godzilla was quickly overwhelmed by the combined forces of Monster X and SpaceGodzilla, but Kiryu turned the tide by freezing SpaceGodzilla with his Absolute Zero cannon, allowing Godzilla to defeat him with his atomic breath. With Godzilla and Monster X the only combatants left standing, Monster X transformed into Keizer Ghidorah and easily took the upper hand against his opponent. Fortunately, Rodan arrived and decapitated one of Keizer Ghidorah's heads with a sonic boom from his wings, allowing Godzilla to fight back. Eventually, Godzilla decapitated another head and killed Keizer Ghidorah by crushing his last head under his foot. Before Godzilla could return to the sea, Boxer attempted a final attack on Godzilla by jumping into his mouth with the Headache Beam. Godzilla swallowed Boxer whole, only showing mild annoyance from the attack.

The building which Godzilla destroys in Destroy All Monsters on New York City was the United Nations building, so the description should be edited.

Screenshot of the UN building just moments away from destroying Godzilla's atomic breath: https://wiki...ew_York!.jpg
Permalink
You are ignoring the author of this comment
Show comment | Manage ignore list

33 months ago
Score 0
If only there had been a way for you to add that information...
Permalink
You are ignoring the author of this comment
Show comment | Manage ignore list

47 months ago
Score 0
This article needs to be renamed to New York City.
Permalink
↑ back to top ・ contents
Retrieved from "https://wikizilla.org/w/index.php?title=New_York_City&oldid=174607"
Categories: