Guiron (ギロン,   Giron) is a blade-headed kaiju who appeared in the 1969 Gamera film, Gamera vs. Guiron.

One of many monsters spawned when the electronic brain controlling planet Terra went haywire and altered the environment, Guiron fell under the control of the last two surviving Terrans, Barbella and Florbella, who used him as their guardian monster. Guiron was kept underneath a riverbed on Terra and summoned whenever Space Gyaos menaced the planet. When Gamera arrived to save two children who were kidnapped by the Terrans, Guiron was unleashed to battle him. Guiron triumphed in their first encounter, but Gamera recovered and sprung back into action, ultimately killing Guiron by throwing a missile into his head and igniting it.

Guiron's Japanese name Giron (ギロン) is most likely a truncation of the Japanese word for guillotine, girochin (ギロチン), a clear reference to the monster's sharp, blade-like head. In English, the monster's official name is "Guiron," but the spellings "Guilon" and "Guillon" have been used in official merchandise as well. 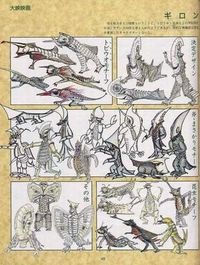 Guiron was designed by Tomohisa Yano on behalf of Akira Inoue, who suffered a backache while working on preparations for the 1970 World's Fair before work began on Gamera vs. Guiron. According to director Noriaki Yuasa, Yano initially wanted the new monster to be a flounder-like monster with the actor entering its suit sideways, but this was too difficult to realize. Inoue commented that the design of the enemy monster was "biologically in mind" at first, and of the final design of Guiron - which was far from "biological" and contrary to this idea - said "I created an amazing monster anyway. The staff came up with the idea of having the whole body be a weapon, and when I put the head of a knife on a body I created Guiron. It's not a living thing anymore, the idea comes from a weapon. Only Guiron is like this." Looking back on the series, Inoue cited Gamera vs. Guiron as his favorite work.

While Ex Productions was typically in charge of modeling monsters for the Gamera series, the company was busy modeling Yongary for the South Korean monster film Yongary, Monster from the Deep. Instead, Eizo Kaimai's Kaimai Productions handled modeling of the Guiron suit. An elaborate miniature model of Guiron was also created.

Guiron was revisited as a possible foe for Gamera in the second entry of the Heisei trilogy, but did not make the cut. However, many features of Guiron such as his extraterrestrial origin, facial horn used as a weapon, and a body made of inorganic material were present in the Mother Legion.[4] Director Shusuke Kaneko stated that he was in charge of writing the script and coming up with ideas for Gamera 2 with Shinji Higuchi and said that Guiron was indeed considered as an enemy monster. Writer Kazunori Ito stressed, however, that Guiron did not form the basis for the Mother Legion, who was conceived based on ideas for the story. Ito did however state that Legion being a space monster may have been influenced by Guiron.

Guiron is an alien monster that normally walks on all fours, but can also stand on two legs when the situation requires. It is an unusual-looking creature, with tough gray skin, a small mouth, sleepy looking eyes and a low, groaning bellow. The most unusual feature of this beast's anatomy, however, is the gigantic blade that it sports on its head, which is nearly as long as its body.

Guiron acted as the guardian monster of two brain-eating space women, the last of a dead civilization on the planet Terra, and lived in a special hangar under a stream at the Terran Base. The aliens guided him with a mind control device. Before the Terrans revealed their true intentions, Guiron proved his combat prowess by effortlessly killing a Space Gyaos, reflecting its sonic cutter beam and literally slicing it to pieces with his blade. Guiron later fought Gamera, and nearly killed him as well, before returning to base. After the two kids activated the doors to Guiron's home, he once again came back from below ground, and destroyed the Terran Base. The fire given off by the burning buildings revived Gamera, who challenged Guiron to continue the fight. After a long fight in which Gamera used new acrobatic techniques to try and outsmart Guiron, Gamera eventually managed to defeat the knife headed beast by flipping him upside down - his blade stuck in the earth - then igniting a missile that had gotten stuck in his circular indents, blowing off the upper half of his body and killing him.

Guiron is mostly a melee-oriented kaiju. Almost all of his abilities revolve around the massive blade he sports on his forehead. It is 100 times harder than diamond, strong enough to reflect Space Gyaos' Supersonic Scalpel and cut into Gamera's shell after repeated stabs.[3]

Due to Guiron's blade only being usable as a weapon at close range, Guiron will resort to his secondary attack, a pair of four shurikens stored in two circular indents in the blade. These shurikens are incredibly sharp and also induce severe bleeding in any opponent they hit, enough to render Gamera unconscious in mere minutes. Guiron can guide these shurikens using telepathic waves.[3] They were sharp enough to cut right through Gamera's arms and lacerate his temples to the point of unconsciousness.

Despite his bulky appearance, Guiron can be extremely agile in battle, as noticed when he was able to leap high into the air to take down Space Gyaos. Guiron can jump up to a distance of 1,300 meters per jump.[3] Guiron's eyes have a 360 degree field of view like a chameleon's, and his teeth are 60 times sharper than those of a piranha. Guiron has powerful magnetic suction cups in the palms of his hands which can attract objects.[3]

The skin over the part of Guiron's head where he launches his shurikens is weak,[3] which Gamera exploits by shoving a missile through it and then detonating it, killing Guiron.

To better serve his role, Guiron's roars almost sound dog-like, consisting of low growls and resonant roars. After Guiron kills the Space Gyaos by beheading it, he can also be heard making a low, guttural laugh. The cries of disgust Guiron makes when he inspects Space Gyaos' meat are actually director Noriaki Yuasa saying "Kusee, kusee," as written by the recording staff. These cries would later be used for the monster Scoradon from the show Fireman.

Guiron's roars were later used for the Allosaurus in the BBC television show, Walking with Dinosaurs.

This is a list of references for Guiron. These citations are used to identify the reliable sources on which this article is based. These references appear inside articles in the form of superscript numbers, which look like this: [1]

↑ back to top ・ contents
Retrieved from "http://wikizilla.org/w/index.php?title=Guiron&oldid=174175"
Categories: