Jiger (ジャイガー,   Jaigā) is an ancient kaiju who first appeared in the 1970 Gamera film, Gamera vs. Jiger.

A legendary demon who inhabited the lost continent of Mu, Jiger was awakened in the modern day when the statue known as the Devil's Whistle was removed from Wester Island. Jiger had a brief skirmish with Gamera before pursuing the statue to Osaka, Japan, where Gamera arrived to challenge her again. Jiger defeated Gamera by infecting him with her parasitic young, then moved on to the location of Expo '70, where she threw the Devil's Whistle into the ocean. Fortunately, Gamera was cured by humanity and returned for a final duel with Jiger, where he successfully killed her by retrieving the Devil's Whistle and throwing it into her skull.

Jiger's name means "terrible as a demon" in the ancient language of Mu. Jiger was originally given the placeholder name Giant Demon Beast X (大魔獣X,   Daimajū Ekkusu), and is referred to as Monster X in the American version of her film appearance. 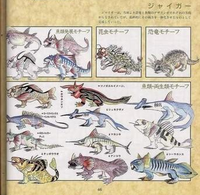 Jiger was designed by special effects artist Tomohisa Yano. Several pieces of concept art for Jiger indicate that she originally was going to have a more aquatic, fish-based design. As Ex Productions was currently busy working in Taiwan and South Korea, Jiger's suit was instead made by Eizo Kaimai's Kaimai Productions. The suit was reportedly very difficult to move in as the suit actor was required not to have his knees touch the ground, and was designed with an emphasis on "look and feel." A 6-shaku (Japanese foot) model of Jiger was also used.

Jiger is a horned quadrupedal reptile somewhat reminiscent of the extinct dinosaur Triceratops. She has multiple spikes on her face and a raised fin on her back. Her skin is light brown and covered in circular patterns.

Jiger is an ancient demonic creature that once inhabited the lost continent of Mu.[2] She was awakened in the present day when a statue known as the Devil's Whistle was removed from her island.

After the Devil's Whistle was removed from Wester Island, Jiger made her first appearance and got Gamera's immediate attention. The first of several fights ensued, and Jiger won by shooting projectile quills from her face. The quills impaled Gamera's arms and legs, piercing all the way through and preventing Gamera from withdrawing his limbs into his shell and taking flight. To make matters worse, Gamera was on his back and could not move. He pulled himself up with his tail using a large rock and then removed the offending quills from his limbs and was finally able to fly after Jiger.

Meanwhile, Jiger was actively seeking the statue, because it was making a horrible ringing sound that was causing her tremendous pain. Jiger let nothing impede that hunt as she split two ships in half and started tearing through Osaka. Scientists were beside themselves as Jiger displayed another weapon: a heat ray that vaporized not only flesh but entire city blocks. The JSDF did make a token effort to kill the monster, but her quills knocked down the F-104 fighters, ending the JSDF's involvement.

Gamera returned for round two as the fight was witnessed by several children. Gamera knocked Jiger around and appeared to have the upper hand until Jiger pulled Gamera to her. Jiger extended a stinger from her tail and inserted the barb into Gamera's shoulder, laying an egg inside his lung. Gamera staggered away, roaring in agony. Finally, he barely made it to the bay and his body turned a chalky white color, almost like ice. Gamera was presumed to have been killed at this point as Jiger headed straight to the World's Fair. Jiger finally obtained the statue, and threw it into the ocean, ending the painful noise.

The scientists were checking out possible causes of the noise, as it affected humans, causing temporary insanity. The children convinced them to do a medical exam on the comatose Gamera, where it was discovered that there was a dark spot on one of his lungs. One of the scientists served as a zoo director and realized that the spot might not be a fast-spreading cancer, but actually a larval Jiger growing in Gamera's lung. An operation was needed to remove the threat, so the children took the initiative by taking a walkie talkie and a mini-sub. Communication was established with the kids and they entered Gamera through his open mouth, and after almost going into his stomach, they arrived at the problem lung. The children were able to exit the sub and walk around in the lung. There, they discovered the baby Jiger.

The baby looked like its mother, except that instead of shooting quills, the baby squirted sticky goo. But the baby had a weakness just like its mother: white noise. The kids discovered this was actually a fatal weakness and managed to kill the baby using static from their radio. They left Gamera's body and reported their findings to the scientists. They rigged up large speakers to keep Jiger at bay, as well as figuring out that power would have to also be run into Gamera, who could not recover on his own. The children made a final trip inside Gamera to hook up a set of power lines directly to his heart.

Jiger was kept still by the speakers playing the white noise. It was not enough to kill Jiger, but bought enough time for the other plan to start. Gamera was subjected to high voltage shock before the electrical grid overloaded. It was enough that Gamera revived on his own.

Gamera flew over to the World's Fair for the final battle. Jiger tried every weapon she had, but Gamera merely retracted into his shell when the quills started flying. Jiger then used her heat ray. It didn't affect Gamera's shell or even skin. Gamera body-slammed Jiger several times from great heights, but Jiger wasn't really affected. However, it bought Gamera the time needed to go into the ocean to retrieve the Devil's Whistle from the sea floor. Jiger, enraged by the statue's return, attempted to infect Gamera again. Gamera used the statue to crush Jiger's tail, destroying the stinger. Gamera taunted Jiger with the Devil's Whistle, who tried in vain to catch Gamera and retrieve the statue. Gamera finally ended the fight by throwing the statue at Jiger, which embedded itself in Jiger's skull, killing her.

The evil space criminal Zanon resurrected Jiger during his attempted invasion of Earth, but Gamera defeated her once again.

Jiger is incredibly powerful among Gamera's enemies, defeating him twice in combat. She possesses a wide array of abilities.

Jiger can emit a high-frequency light ray from her head known as the Magnetum Ray (マグネチューム光線,   Magunechūmu Kōsen). This ray can burn anything in its path and reduce humans to bleached skeletons instantly.[3] It is ineffective at burning Gamera, though the high-frequency sound waves damage his eardrums.

Jiger can fire needles of solidified saliva, known as Solid Saliva Missiles (唾液固形ミサイル,   Daeki Kokei Misairu), from the corners of both sides of her nose.[3] She used these missiles to skewer Gamera's limbs and make him unable to retract his limbs into his shell. Gamera learned to counter this attack in their second encounter using his Steel Frame Attack. Jiger's offspring can fire an imperfect form of this attack, which results in a highly adhesive liquid.

Jiger has a stinger attached to her ovipositor in her tail,[3] which can implant her parasitic young into the body of a foe. This larval Jiger parasitizes the host by sucking its blood, and as such this maneuver is called the Vampiric Tactic (吸血戦法,   Kyūketsu Senpō). At the time Gamera vs. Jiger was released, this attack was also known as the Transparency Tactic (スケスケ戦法,   Sukesuke Senpō), as it rendered Gamera's head and arm transparent.

Jiger is equipped with Magnetic Suckers (マグネチック吸盤,   Magunechikku Kyūban) on the palms of her hands and the soles of her feet. These suckers possess one million times the suction power of an electric vacuum cleaner and can be used to pull in objects that are far away. She uses them to grab rocks and throw them at Gamera. By grabbing onto Gamera's shell with these suckers, Jiger can perform a Deadly Airborne Throw (必殺空中回転投げ,   Hissatsu Kūchū Kaiten'nage).

After consuming seawater, Jiger can expel jets of it from the gills (エラ,   era) located on the sides of her head to propel herself forward at a speed of 300 kilometers per hour. This allows her to glide over the sea and smash ships in half, or to fly through the air for a short distance.

As Jiger emits high-frequency waves, she is weakened by low-frequency ones. This weakness is lethal to her offpring, which is killed when a communicator is stuck to its head. Jiger can be kept at bay when low frequencies are played through loudspeakers, and was kept dormant by the Devil's Whistle which emitted such frequencies as wind blew through it for millennia. This weakness was not lethal to the adult Jiger, though Gamera was ultimately able to kill her by simply throwing the Devil's Whistle directly into her skull.

Jiger's roars actually originate from the screeching roars of Barugon.

This is a list of references for Jiger. These citations are used to identify the reliable sources on which this article is based. These references appear inside articles in the form of superscript numbers, which look like this: [1]

13 months ago
Score 0
Where does it says that Jiger is female? I mean, the monster kinda impregnated Gamera, right? Hermaphrodite maybe?
Permalink
You are ignoring the author of this comment
Show comment | Manage ignore list

18 days ago
Score 0
She has an ovipositor which is a female reproductive organ. Also the box for the Trendmasters toy of her makes a point to refer to her as a female and a "she-devil."
Permalink
You are ignoring the author of this comment
Show comment | Manage ignore list