Aobozu (青坊主,   Aobōzu, lit. Blue Priest) is a kind of Japanese yokai, or folklore creature. One appears in episodes 2 and 3 of the 1974 Toho tokusatsu series, Go! Kotaro Ushiwaka.

Aobozu's name is derived from the Japanese words ao (青), meaning "blue," and bōzu (坊主), meaning "priest." While Aobozu does not have any one consistent appearance across tales, a common depiction is a blue humanoid figure resembling a priest, thus inspiring its name. While his name is not spoken in Go! Kotaro Ushiwaka, the book Toho Special Effects All Monster Encyclopedia confirms the character's identity.[2]

Aobozu somewhat resembles a human with a bald head and mostly blue skin, but with a reddish-white chest and hands and brown feet. 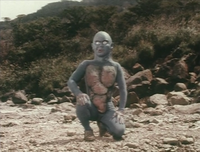 Following the first defeat of her loyal minions at the hands of Kotaro Ushiwaka, Dark Clan leader Coonjo summoned Aobozu to aid in a counterattack against the hero. Aobozu appeared alongside Coonjo and three of her minions to confront the strongman yokai Nyudo, who attempted to fight back against them. Aobozu kicked Nyudo to the ground and Coonjo prepared to finish him off with her sword, but she was struck with the tip of a naginata that had been thrown at her. Kotaro, who was perched in a nearby tree, leaped down before the band of evildoers, revealing his presence. Coonjo's subordinates charged at the hero, but were outmatched in hand-to-hand combat and finished off with slashes from Kotaro's naginata. The downed Aobozu and minions teleported away, while Kotaro drove Coonjo off with a blinding flash of light reflected off of his naginata blade; infuriated by the defeat, Coonjo swore revenge. 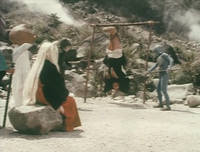 Later, as Kotaro was hiking through the mountains of Jigokudani, he was drawn to a nearby plateau by the panicked screams of Nyudo. There, he saw a tied up Nyudo surrounded by Coonjo, Aobozu, and a new group of minions. Kotaro leaped into action, slicing Nyudo's restraints. However, as Nyudo fell to the ground, he was revealed to be nothing more than a rock, with the real Nyudo sitting a short distance away in the custody of Coonjo and her minions; Kotaro had fallen into a trap. As Coonjo taunted Kotaro, he appeared to surrender but lashed out when Aobozu and another of her servants attempted to restrain him. Kotaro, disarmed of his naginata by Aobozu, reached for a nearby rope and pulled Coonjo's sword from her hands. He engaged Aobozu in combat, managing to retrieve his naginata before finishing the yokai off once and for all. Kotaro defeated the remaining minions and freed Nyudo, leaving Coonjo to again seek vengeance against the duo.

Aobozu wields a spear- or staff-like weapon with a bladed tip. In episode 3 of the series, he disarms Kotaro and wields his naginata for a short period.

In episode 3, Aobozu, like Coonjo's other minions, appears to possess some form of teleportation, disappearing from Jigokudani and being transported to a grassy field to fight with Kotaro.

Aobozu was not shown to be a particularly skilled combatant, being easily dispatched by Kotaro Ushiwaka in both of their battles.

This is a list of references for Aobozu. These citations are used to identify the reliable sources on which this article is based. These references appear inside articles in the form of superscript numbers, which look like this: [1]

↑ back to top ・ contents
Retrieved from "http://wikizilla.org/w/index.php?title=Aobozu&oldid=173041"
Categories: