Vampi is a dark green-skinned demon with large, bloodied fangs and a red, claw-like appendage on his left arm. He wears a long, dark cloak which covers most of his body. 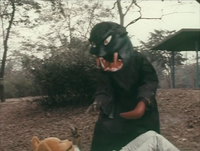 As the Bloodsucking Demon Vampi was resting next to a tree, he was approached by Uragira, who tapped him on the back. As Vampi turned around, Uragira was frightened by what he saw, and fell to the ground. As he helplessly screamed, Uragira was incapacitated by Vampi's claw, which punctured the side of his neck. Extracting some blood in the process, Vampi sucked it off his claw, just as Coonjo appeared to commend him. Coonjo then pointed out Kotaro Ushiwaka, who was approaching. Kotaro is confronted by the duo, with Vampi soon jumping forth toward him to engage in battle. Kotaro began the battle by slashing at Vampi with his naginata, but to his surprise, the yokai was unaffected. Vampi commented on this, as Kotaro began to frantically slash at him. Making his counterattack, Vampi grabbed Kotaro's weapon and threw it, landing between the branches of a tree. With Kotaro at a severe disadvantage, Vampi instructed Coonjo to attack alongside him. Coonjo attempted to rush Kotaro with a short dagger-like sword, but had the weapon knocked from her hands by him, who had also unsheathed his dagger. This was enough to distract Kotaro however, as Vampi was able to strangle him from behind. Just as it seemed all hope had been lost, Nyudo approached the scene, unaware of the ongoing battle. Seeing Coonjo's dagger sticking into the ground, Nyudo grabbed the weapon and threw it, which miraculously landed in the same tree as Kotaro's naginata, and created a bright flash of light when the two blades collided. This flash caused Vampi severe pain, prompting him to order Coonjo to remove the weapons from the tree. Chasing after Coonjo, Kotaro was able to ward her off, and retrieved both his naginata and her dagger. Now wielding both weapons, Kotaro created another flash, which sent Vampi flying backward. The battle moved uphill to a grassy clearing, where Vampi managed to knock the dagger from Kotaro's hand once more. Luckily, Kotaro managed to send Vampi flying into a tree with his naginata, which bought him enough time to retrieve the dagger. Kotaro created one final flash of light with the weapons, which was enough to destroy the bloodsucking demon once and for all.

Vampi is susceptible to bright flashes of light, and after repeated exposure, the monster's durability was seemingly weakened and ultimately caused him to combust.


↑ back to top ・ contents
Retrieved from "http://wikizilla.org/w/index.php?title=Vampi&oldid=160762"
Categories: