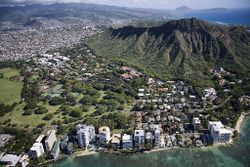 Honolulu is the main city on Oahu, Hawaii, and is also the state capital. It is famous for its consistently tropical climate, due to being situated near the island's volcano. Honolulu appears in the 2014 Legendary film Godzilla.

The U.S.A.F., based out of the USS Saratoga, journey to Honolulu after they learn that a Russian submarine had reported that it was under attack. Ford Brody also departed from the Saratoga to Hawaii, so that he could take a flight out of Honolulu International Airport. Upon arriving at Honolulu, the Americans sweep the jungle while approaching the coastline, and discover the submarine high in a tree, its front bearing major damage. Suddenly, the Male MUTO ambushes the military, then proceeds to wreak havoc on the city with his EMP Abilities. This behaviour attracts Godzilla from the Pacific Ocean. Godzilla surfaces and causes a Tsunami, which destroys the shore front area of the city and killing large numbers of civilians. In his battle with the MUTO at the airport, multiple buildings are destroyed. The MUTO flies off, and Godzilla gives chase by diving back into the ocean.


↑ back to top ・ contents
Retrieved from "http://wikizilla.org/w/index.php?title=Honolulu&oldid=128613"
Categories: