The Mystery Bones of Infant Island (インファント島の怪骨,   Infanto-tō no Kaikotsu) is a turtle kaiju created by Toho that first appeared in the 1964 Godzilla film, Mothra vs. Godzilla.

"Mystery Bones of Infant Island" is a translation of the official Japanese name for the creature given on an officially licensed 2012 ornament of it produced by Cast.[1][2] Cast later released an ornament for the skeletons lying around Skeleturtle in Mothra vs. Godzilla, which referred to them as the "Other Mystery Bones of Infant Island" (インファント島の別の怪骨,   Infanto-tō no Betsu no Kaikotsu). Officially licensed t-shirts featuring Skeleturtle that were sold in Japan refer to the creature in English as Infant Island's Kai Kotsu. "Skeleturtle" is a fanmade nickname, created by Chris Mirjahangir of Toho Kingdom,[3] before the official name was known. Another unofficial fan nickname for the creature, "Kame no Gaikotsu" (亀の骸骨,   Kame no Gaikotsu, lit. Turtle Skeleton), was coined by Miles Imhoff, also from Toho Kingdom.[3]

Skeleturtle is purely white and gray, with black eyes, and a bland, pale shell with no visible scutes. It has a fairly long neck, and very short limbs, which have tiny bone fragments visible. Though it could be interpreted as either a skeleton bobbing in the wind or a living creature moving its head back in forth in Mothra vs. Godzilla, it is unambiguously portrayed as a living creature in Godzilla: Rulers of Earth.

Within the context of Mothra vs. Godzilla, Skeleturtle's direct origins are unknown. It is possible that it was either a larger turtle killed by nuclear testing or a species of turtle affected by the atomic radiation contaminating Infant Island.

When Ichiro Sakai, Junko Nakanishi, and Professor Shunsuke Miura traveled to Infant Island to beg Mothra for help in defeating Godzilla, they witnessed how the island had been devastated by nuclear tests. Skeleturtle sat among the remains scattered around their landing site, although they did not remark on it.

Skeleturtle in Godzilla: Rulers of Earth #19

Skeleturtle fled from the battle between Mothra and Battra on Infant Island in Godzilla: Rulers of Earth #19. 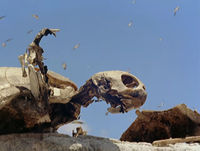 A turtle skeleton in Mondo cane, potentially the inspiration behind Skeleturtle

This is a list of references for Skeleturtle. These citations are used to identify the reliable sources on which this article is based. These references appear inside articles in the form of superscript numbers, which look like this: [1]

↑ back to top ・ contents
Retrieved from "http://wikizilla.org/w/index.php?title=Skeleturtle&oldid=156647"
Categories: