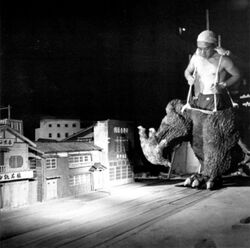 Suitmation (スーツメーション,   Sūtsumēshon) is a term originally used in Japan for a Tokusatsu (special effects) technique to portray a daikaiju (giant monster) using an actor in a monster suit on sets made using models and other supplies easily obtainable at a hobby shop. Although the origin of the term is not quite known, it is said that the term was used to differentiate this technique from the "Dynamation" stop-motion animation by special effects wizard, Ray Harryhausen.

Eiji Tsuburaya, Japan's special effects pioneer, set the standard for Suitmation, starting with his work on the many classic Godzilla movies and other tokusatsu kaiju films from Toho Other studios, including Daiei Motion Picture Company, Toei Company Ltd., and even Eiji Tsuburaya's own Tsuburaya Productions, continued to portray giant monsters (and even giant superheroes and robots) in movies and television using the Suitmation technique. The technique began to evolve as artists emphasized great detail. Design teams are sometimes only one or two people, and the suits can take a long time to develop. In the United States, the term became associated with B-movies was often used to point out the cheesiness of "rubber suits." When the U.S. film industry became highly dependent on CGI and soon saw "classic techniques" as being obsolete, Japan further perfected the art, and when CGI was integrated, it brought more out of the suits. Shinji Higuchi became well-known for his use of both CGI and suitmation throughout Daiei's Gamera trilogy in the late 1990's. In the U.S., effects artist such as Steve Wang, Rick Baker, Stan Winston, and a handful of others still continued to utilize traditional practical effects techniques and treated the style as an art form, dedicating themselves to detail and precise realism for the suits. Winston in particular revolutionized special effects through combining animatronics, suits and puppets with CGI to create even more convincing effects in films such as Jurassic Park. This method was and is still used on Jim Henson's well-known programs Sesame Street, The Muppet Show and Dinosaurs; and on TV Globo's children's program TV Colosso. By the 2010's, tokusatsu films utilizing suitmation in Japan had become increasingly less common, with Japan's film industry gradually improving its use of CGI. The upcoming Gamera film from Kadokawa even promises to portray its monsters completely through CGI. In 2015, Toho released a two-part live-action adaptation of the Attack on Titan manga and anime series, directed and with special effects by Shinji Higuchi. Higuchi elected to portray the Titan creatures with actors covered in makeup and prosthetics augmented with CGI, while the Colossal Titan was portrayed with a gigantic "suit" (in reality a large bust of its upper body operated by three people) also augmented with CGI. Toho's upcoming film Shin Godzilla also features special effects from Higuchi, and was originally expected to make use of similar techniques. However, the finalized film solely uses CG animation, with some motion capture.

Most costumes used in suitmation are created using a method called "Foam Fabrication." This process has varied as the technology available to technicians has changed.

In any case, the suits were very, very grueling, especially in the pioneering days of suitmation when studios were very hot. The average stuntperson could only last for three minutes before becoming too uncomfortable. Conditions improved when studios became air-conditioned. In Godzilla 2000: Millennium, an oxygen hose was attached to Godzilla's tail, which threaded up to the neck so that the actor could breathe.

Suit actors for tokusatsu superheroes such as Ultraman usually wore a form-fitting latex costume similar to a wet suit. The helmet was made originally from latex, and later, fiberglass. A set of batteries in the suit make the eyes and Color Timer light up. Toei superheroes had various sorts of costume materials, from leather to vinyl to cloth. Starting with Kagaku Sentai Dynaman, the heroes in Sentai wear spandex. Helmets are made of fiberglass, and had clips on the side to lock them into place. Later, helmets had the clips hidden for a smoother look, although knockoff helmets used for promotional work and live appearances do retain the external clips.