King Kong is an unproduced attempt at a remake of the 1933 film of the same name which was to be directed by Peter Jackson in the late 1990's. Jackson and his wife Fran Walsh began writing the screenplay in 1996, with the film targeted for a 1998 release. The project was canceled by Universal Pictures in 1997, though Jackson was approached by the studio again years later and offered another chance to direct his remake. This resulted in the 2005 version of King Kong, directed by Jackson. 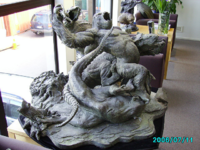 While directing his first Hollywood film, The Frighteners, Peter Jackson was approached by Universal Pictures about making a remake of King Kong, an offer which Jackson immediately accepted, as he has said that the original King Kong is his favorite movie. Universal had been considering producing a remake of King Kong ever since the 1970's, when they were forced to shelve a remake titled The Legend of King Kong after Dino De Laurentiis and Paramount Pictures acquired the remake rights from RKO instead. Jackson and his wife Fran Walsh then began writing the first draft of the screenplay in April 1996 with the film having a planned release date of Summer 1998[2] with Robert Zemeckis, who worked on The Frighteners with Jackson, serving as the executive producer.[3] During the pre-production phase, Weta Workshop co-founder Richard Taylor created a bronze maquette of King Kong fighting three Tyrannosaurus rex. The next day after the maquette was completed, Jackson suggested to Taylor to make a larger version to get Universal Pictures excited about the film, resulting in the creation of a coffee table-size fifty-eight part sculpture that wowed Universal executives when Jackson assembled it in his hotel room.[2] Weta Workshop enlisted American comic book artist Bernie Wrightson, who flew to Wellington, New Zealand, to develop the habitat of Skull Island.[2][4] For the role of Ann Darrow, Jackson approached actress Kate Winslet.[5]

According to Richard Taylor, "hundreds of illustrations and dozens and dozens of conceptual sculptures" were created for Kong and the film's creatures.[4] To portray the creatures of Skull Island, the plan was to utilize a combination of stop-motion animation, computer generated imagery, and animatronics.[4] In the case of Kong, it was planned for a performer in a suit to be used for closeups of his legs stomping through trees.[2] Stop motion armatures outfitted with foam latex were created for Kong, Tyrannosaurus rex, the raptors, and the Brontosaurus.[4] The stop motion puppets were utilized in making two frame previsualizations of the film. Despite King Kong having his own puppet, he was envisioned as a computer-generated creature, though practical effects were to be used in close up shots.[2] The animatronics created by Weta Workshop included close up heads for the creatures for which they had stop-motion armatures and a full-size hydraulic hand of Kong that was built in pre-production.[4][2] An animatronic of a Sumatran giant crocodile consisting of a full-sized head and body was even being sculpted by Weta Workshop prior to the film's cancellation.[4] At Weta Digitial, the visual effect teams were working on dinosaur walk cycles, researching techniques to create Kong's fur, and creating a whole digital New York City building by building. Furthermore, miniature locations were planned, with a large scale miniature of Skull Island having been the only one created.[4]

In January 1997,[2] the same year filming was planned,[5] Peter Jackson received a call from Universal that King Kong had been canceled.[2] The reasons given as to why Universal canceled the film vary by source. The Making of King Kong: The Official Guide to the Motion Picture written by Jenny Wake claims that it was "after a string of monster movies underperformed at the box office."[4] King Kong: The History of a Movie Icon from Fay Wray to Peter Jackson and Peter Jackson himself give two reasons. The first was the underperformance of Jackson's previous film The Frighteners and the second was the upcoming release of two giant monster movies: GODZILLA and Mighty Joe Young. Jackson explained, "There was no way we could get Kong out before Godzilla; and with Mighty Joe Young coming along, the studio was afraid people would be tired of big monsters on the loose — so they canned the movie."[2] Jackson was deeply affected by the cancellation, saying "It was probably the most disastrous thing in my life."[2] Richard Taylor recalls in The Making of King Kong: The Official Guide to the Motion Picture that Jackson was so upset over the cancellation of King Kong that Fran Walsh relayed the news to Weta Workshop on his behalf. Taylor said that when he told the Weta team the news that "There were tears and sadness. We felt that we had finally got our chance to prove ourselves and do an international picture of great esteem, and to have lost it was desperate for us at the time." Afterward, digital artists at the workshop were worried about finding employment after the film's cancellation, but this period of worrying ended after Robert Zemeckis hired Weta Digitial for his next film Contact.[4]

Devastated by the cancellation, Jackson turned his attention to creating the film adaptations of The Lord of the Rings trilogy.[5] During post-production of The Two Towers, a new regime at Universal Pictures contacted Jackson about remaking King Kong again. Jackson cautiously confirmed his interest, the cancellation of the 1996 film still a fresh memory in his mind. Jackson proposed that the film start from scratch, discarding previous script drafts as he and his wife hated the tone of the script with Jackson describing it as "very flippant" and "half-arsed". After striking a commitment with Universal to make the film, a new script was written.[6] Peter Jackson's finished King Kong was finally released on December 5, 2005.

Despite the 2005 film starting from scratch, elements of the previous attempt still remained, such as the Brontosaurus stampede scene and Kong's battle with three tyrannosaurs. The Brontosaurus and Venatosaurus in the finished film were based on maquettes from the 1996 film.[7] The Vastatosaurus rex from the 2005 film also bears a resemblance to the tyrannosaurs seen in Richard Taylor's sculpture. As of the writing of The Making of King Kong: The Official Guide to the Motion Picture, the sculpture still remained at Weta Workshop's HQ on a coffee table at the reception room.[8]

This is a list of references for King Kong (1996 film). These citations are used to identify the reliable sources on which this article is based. These references appear inside articles in the form of superscript numbers, which look like this: [1]

Bernie Wrightson, an artist that was hired to work on the film, has just passed away on March 19, 2017.