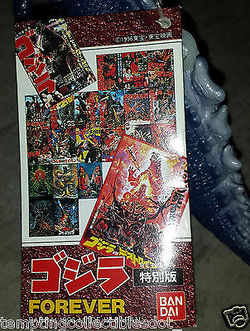 Following the release of the film Godzilla vs. Destoroyah, Bandai produced a new limited toy line originally called the "Super Real Godzilla Series," but given the name "Godzilla Forever" on tags. The line consist of reissues of six figures from the company's past Godzilla toy line with new detailed paint jobs.

↑ back to top ・ contents
Retrieved from "http://wikizilla.org/w/index.php?title=Godzilla_Forever&oldid=154869"
Categories: