Stegodzillas (ステゴジラス,   Sutegojirasu) is a kaiju created by Toho that first appeared in episode 26 of the 1972 tokusatsu kaiju series, Go! Godman titled Godman vs. Stegodzillas and Akumon.

Stegodzillas's name is most likely a combination of "stego" from "stegosaurus," and Godzilla, despite the fact that he doesn't resemble either remotely.

Stegodzillas resembles a golem in physiology, although he appears to wear several pieces of armor. His legs are protected by dual leg guards, and he wears a gauntlet on one of his arms. He also wears a helmet with two ear-like protrusions on top of it. He is also capable of materializing a blowgun in his hands, which he uses in combat. However, these armor pieces are not present in Go! Godman. Instead, Stegodzillas wears a brown and red garment on his body which has a white spider web-like pattern over the front of it. He also wears a green cape, black pants, black boots, and green and red gloves. Similarly, Stegodzillas also did not possess a blow gun in his original appearance, but rather threw darts which he could secrete from his hands. 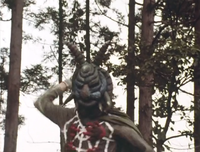 Stegodzillas was the thirty-seventh monster to battle Godman, and fought alongside Akumon. The two monsters had been commanded by an unnamed sentient volcano to sacrifice a young girl. However, they were unsuccessful in their efforts due to Godman intervening, cutting off their communication to the volcano by clearing the smoke. He then fought both monsters, and was eventually successful. 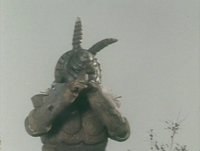 Stegodzillas was the thirty-sixth monster to battle Greenman. He was created by Tonchiki, an underling of the devil king Maoh, to retrieve blood of children to free Maoh from his imprisonment in the Underworld. He was deployed inside of a bucket full of water which three boys had been using, among two other buckets, to throw darts at. Once the monster was disturbed by the darts it burst forth from its hiding place and attacked the children. They were able to get away and use devices known as Green Calls to summon the mechanical hero Greenman to help them. After a long exchange of blows, Greenman was eventually able to kill Stegodzillas using the Greenman Stick and it's explosive tip. However, Maoh was able to cast a spell on the monster to revive it and grant it a blowgun which had been taken from it earlier in the battle. A dart from the weapon was able to incapacitate Greenman but the Green Calls were once again used, this time to repair his machinery. They closed out the battle atop a hill where Greenman threw Stegodzillas off and destroyed him with the Breaster missiles, launched from a hidden compartment in his breastplate.

In Go! Greenman, Stegodzillas possesses immense physical strength and is able to easily toss Greenman around.

In Go! Godman, Stegodzillas is capable of secreting darts from his hands which he used to attach Monster Uncle and Eri to a tree. However, in Go! Greenman this ability was adapted into a blowgun that he could fire the darts from instead.

38 months ago
Score 0
That thing doesn't look like it would make Gezora's sounds.
Permalink
↑ back to top ・ contents
Retrieved from "http://wikizilla.org/w/index.php?title=Stegodzillas&oldid=162153"
Categories: