Godman was the first tokusatsu hero to be created by Toho, therefore also cementing him as the first Toho Kyodai Hero and the first of many heroes to be extraterrestrial. Godman is a skilled and barbaric warrior whom hails from the planet Fire God, with his origins primarily unknown. In Godman's onscreen debut, episode 1 of Go! Godman, he had seemingly already been on Earth for quite a time, long enough for the children there to become acquainted with his name. As they are attacked by the golden beast Kinger, the children shout out for Godman who arrives just in time to save them. This formula persists throughout the series, with Godman utilizing a slue of weapons and attacks to save the children in his 26 episodic battles. Godman's final battle of his series pitted him against Akumon and Stegodzillas, humanoid monsters which worship a volcanic deity and are tasked with kidnapping a girl for sacrifice. Godman battles the duo valiantly, eventually destroying them and saving the captured young girl, as well as ultimately saving the Earth from its monstrous attackers.

Roughly 35 years later, in 2008, Godman reappeared in the Go! Godman film. Although never established as canon to the original series or its followup Go! Greenman, Godman is summoned once more by the children of Earth to battle one of his past foes, Tsunozillas. Growing to giant size, Godman battled with the kaiju in a city and pulverized it with his God-Sparks. On contact with the God-Sparks, Tsunozillas exploded into chunks of flesh which littered the city, two of which morphed into the human-sized monsters Gaira and Shilarji. After returning to a human size, Godman began fending off the monsters from two civilians, but became overwhelmed, with one of his bracelets forcefully removed from his arm. Greatly weakened, Godman was saved by one of the civilians, who threw the bracelet back to Godman to restore his full power as well as also summoning fellow space warrior Greenman to the scene with a Green Call. Together, Godman and Greenman defeated the two monsters and the incursion was reported in newspapers worldwide. It is presumed that Godman and Greenman returned to space afterwards to rest, and there they have remained.

Godman bears a very slight resemblance to Ultraman, with a similar colored suit, as well as also having somewhat of a resemblance to Fireman. He is constantly seen wearing a dark blue translucent visor, from which a mat of blondish-white hair slightly covers it. In a similar fashion to Zone Fighter, he wears a pair of manacles on each of his wrists, a large belt around his waist, and a pair of anklets, all of which are blue and bear a large, golden letter "G."

Godman is a savior of Earth and protector of people. Unlike Ultraman, Godman very rarely considers sparing foes, and usually opts to beat the foe down until they are exhausted. It could even be said that Godman behaves barbaric and somewhat egotistical at times, such as in Godman vs. Yasugon and Tsunokeler, where Godman beats the innocent kaiju Yasugon down relentlessly, only ceasing once the monster had bowed down to him. A similar behavior is later seen further on in the series, however it is less barbaric. In the episode Godman vs. Green Mask and Hundler, Godman gives Green Mask the option to surrender, who denies and causes them to continue fighting. Later on in the fight after Green Mask had become severely exhausted, Godman lets up on the monster, but only after it bowed to him just as Yasugon had episodes earlier. 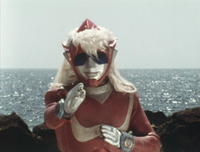 Godman is a native alien from the planet Fire God, and when on his home planet, he usually observes the Earth closely. When humans need his help from rampaging kaiju, Godman appears when they call his name, and defeats the monster, before returning to his planet for rest.

Godman in the Godman movie

Godman comes to Earth once more to defeat Tsunozillas and protect Mika Ayase and Koichi Matsushita. To his surprise, Gaira and Shilarji also later appeared, resulting in Godman nearly being killed. But, Greenman was summoned to even out the score, and Godman was able to finish the two monsters off with his Super Sonic Wave attack.

Godman tends to fight tooth-and-nail, relying primarily on brute force and finishing moves, with his strength shown to be extremely great. However, Godman can also conjure a variety of weapons and moves.

Godman can alter his own size by shouting "Godman Enlarge!" (ゴッドマン拡大), and often does so to fight rampant kaiju.

Godman is capable of flight, while human sized or monster sized, and can even fly from planet to planet.

Godman possesses impeccable sight and hearing, able to see through darkness and hear the cries for help of children from anywhere in Japan, and even beyond into space.

This is a list of references for Godman. These citations are used to identify the reliable sources on which this article is based. These references appear inside articles in the form of superscript numbers, which look like this: [1]


↑ back to top ・ contents
Retrieved from "https://wikizilla.org/w/index.php?title=Godman&oldid=177949"
Categories: