Momonglar (モモングラー,   Momongurā) is a kaiju created by Toho that first appeared in episode 9 of the 1972 tokusatsu kaiju series, Go! Godman, titled Godman vs. Momonglar.

Although almost always referred to as Momonglar (モモングラー,   Momongurā), including on the episode's title screen, the 1990 publication All Kaiju Kaijin (First Volume) strangely lists the monster under the name, Battles (バトルス,   Batorusu).[1]

Momonglar is overall a very strange looking creature. Its skin is a dark, greenish brown color and is covered in medium sized bumps. Its head resembles the cap of a mushroom, and has an array of eyes with white eyelids and red sclera which wrap around it. Momonglar's hands and feet have two and three digits on each, respectively, and are all tipped with bright white claws. Momonglar also possesses a relatively short tail.

Momonglar was the tenth monster to battle Godman. Making a sudden appearance from the mountains, Momonglar gradually began to make its way toward a small town, startling a driver in the process. The man came to a screeching halt upon seeing the beast, abandoning his car and making a hasty getaway on foot. Momonglar proceeded to kick the vehicle about, before crushing it into a scrap heap with its massive foot. Almost immediately after, Godman appeared before Momonglar, and engaged the rampant monster in battle. After an extremely slow-paced brawl, the two combatants made their way atop the mountains from which Momonglar had originally appeared, continuing their fight there. Gradually, Godman was able to corner Momonglar at the edge of the cliff. Threatened and out of options, Momonglar revealed its trump card, summoning a peculiar extendable and retractable weapon. Wielding the device, Momonglar was able to turn the tables of the fight, trapping Godman at the cliff's edge. This upper hand did not last for long however, as Godman was able to summon a weapon of his own, the God-Crush. Godman was able to quickly dispatch Momonglar's weapon, grabbing hold of it with the God-Crush and throwing it into the air, before summoning a God-Circle to throw at it. With both fighters unarmed once more, Godman and Momonglar continued to battle tooth and nail. Eventually, after another lengthy scuffle, Godman was able to beat Momonglar into submission, before finishing the monster off with a blast of his God-Spark attack. 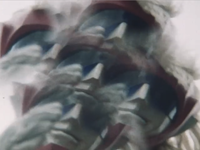 A view of Godman through Momonglar's eyes in Godman vs. Momonglar

This is a list of references for Momonglar. These citations are used to identify the reliable sources on which this article is based. These references appear inside articles in the form of superscript numbers, which look like this: [1]

14 months ago
Score 0
Any relation with Momo Yaoyorozu, or that creepy thing?
Permalink
You are ignoring the author of this comment
Show comment | Manage ignore list

37 months ago
Score 0
is better now
Permalink
↑ back to top ・ contents
Retrieved from "https://wikizilla.org/w/index.php?title=Momonglar&oldid=170799"
Categories: