When in Dash 1 form, Rainbowman wears a yellow suit with yellow gloves and black boots. He has a red belt around his waist and red bands across his chest. He also wears a white necklace around his neck and a yellow mask over his face. On top of the mask he has red sunglasses, and on the top of his head he has a green leafy headdress-like thing. On the headdress is a golden crescent moon that is facing upwards. Finally, he has a bright yellow scarf around his neck.

When in Dash 2 form, Rainbowman wears an orange suit with brown gloves and boots. He has red bands across his chest and a black belt around his waist that has a large silver buckle. He also has an orange mask and a headdress on his head. It has a white outline and a fiery design coming up from it.

When in Dash 3 form, Rainbowman wears a blue suit with navy blue gloves and boots. He has a black belt around his waist and a "V" symbol on his chest in black. He has a blue mask with black lines going down his nose and cheeks. At the top of his mask he has a black crown-shaped thing that covers his eyes.

When in Dash 4 form, Rainbowman wears a dark green suit with even darker gloves and boots. He has a belt around his waist and leafy shoulder pads both in the same color as his gloves and boots. On his upper chest he has a yellow circle that has a smaller orange circle inside of it. He also has a dark green mask with stripes across his cheeks in the even darker green. Finally, he has a leafy headdress that covers his eyes

When in Dash 5 form, Rainbowman wears a completely gold suit. The only thing on him that isn't gold is the brown belt around his waist. His belt buckle, boots, upper chest, and headdress all resemble an outline of a Glaucus Atlanticus

When in Dash 6 form, Rainbowman wears a suit that covers his entire body. It is a brown and beige camouflage pattern.

When in Dash 7 form, Rainbowman wears a white suit with blue gloves and boots. He wears a red belt around his waist and red bands across his chest. He also wears a red necklace around his neck and a white mask over his mouth. In the center of his chest is a green circle that has a raised, golden, four-pointed star on it.

In the remake, Rainbowman's Dashes are more uniform in appearance, with a sleek design with different colored accents on parts of the body, most notably in two tear-like streaks running from each form's eyes. Beyond that, little changes between them save for their coloring and the design on their heads and on their belts. 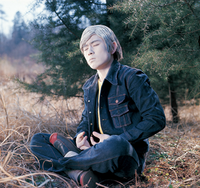 Rainbowman was originally professional wrestler Takeshi Yamato, but after training in India with the yogi sage Daiba Datta, he gained the ability to turn into Rainbowman.

In an animated remake of the original series, Takeshi Yamoto was granted the ability to transform into seven giant warriors to combat the invasion of Earth by the Die Die Empire. In particular strife, he could unite the powers of the Seven Dashes to form the giant mech Rainbow Seven.

Originally being a pro wrestler, Rainbowman has incredible strength. Along with that strength he can also change into seven other forms known as "Dashes" which represent different elements.

To transform into Rainbowman, Takeshi says the magic words "Anokutara Sanmyakusanbodai (Supreme Correct Wisdom) Rainbow Dash 7". Then to switch forms Rainbowman says "Rainbow Dash #", # being the number of the form he wishes to switch to.[2]

Dash 1 (ダッシュ1,   Dasshu 1) is Rainbowman's first Dash form. He has the power of the moon. He is able to deflate himself to crawl through tight spaces and can create thunderstorms.

Dash 2 (ダッシュ2,   Dasshu 2) is Rainbowman's second Dash form. He has the power of fire and can shoot fire from his fingertips.

Dash 3 (ダッシュ3,   Dasshu 3) is Rainbowman's third Dash form. He has the powers of water and air. He can shoot blasts of water and cool air from his hands, and has the ability to breathe underwater.

Dash 4 (ダッシュ4,   Dasshu 4) is Rainbowman's fourth Dash form. He has the power of wood. He has the ability of aerokinesis and can fire pine needles from his fingers. He also has camouflage abilities.

Dash 5 (ダッシュ5,   Dasshu 5) is Rainbowman's fifth Dash form. He has the power of gold. He has short distance flight and electrokinesis.

Dash 7 (ダッシュ7,   Dasshu 7) is Rainbowman's seventh and most prominent Dash form. He has the power of the sun. He can fly, fire solar beams from his forehead, shoot a paralysis beam, create shields, and turn sunbeams into twin swords.

This is a list of references for Rainbowman. These citations are used to identify the reliable sources on which this article is based. These references appear inside articles in the form of superscript numbers, which look like this: [1]

↑ back to top ・ contents
Retrieved from "http://wikizilla.org/w/index.php?title=Rainbowman&oldid=148481"
Categories: