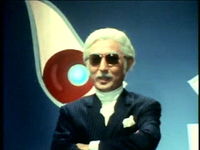 Mr. K is a mysterious man who discloses no information on himself other than that he is a World War II veteran that abhors Japan and its people for the crimes they committed during the war. He soon bumps into Takeshi Yamato who finds out about Mr. K's plans and attempts to stop him. In order to destroy Japan and eliminate his new found enemy Rainbowman, Mr. K creates an army composed mostly of fellow veterans who share his hatred. Over the course of the organization's life, Mr. K enlists the help of multiple new faces including the witch Iguana and her monstrous creations, the assassins Malinda and Norma, Mr. K's own daughter Olga, the cyborg Pagora, the sorcerer known only by his title of "Master Sorcerer Death's Head Man", and multiple others. Together, the group formed six plans to destroy Japan including Operation Cat's Eye, Operation M, Operation Japan Annihilation, Operation Japan Isolation, Operation Cyborg Slave Corps, and Operation Tokyo Missile Attack which entailed driving the Japanese mad with a drug known as "Cat's Eye" which when used on humans drove them to kill, destroying the Japanese economy with counterfeit money, murdering Japan's oil suppliers and sinking oil tankers to deprive Japan of oil, murdering foreigners to give Japan a bad image, using a drug known as "Borg Alpha" to transform the citizens of Japan in to cyborgs, and destroying Japan with missiles respectively. However, Rainbowman proves to be no weak adversary as he eventually wipes out the entirety of the Die Die Gang, leaving only Mr. K to duel him. Although he puts up a good fight, Mr. K is subdued by Rainbowman, and is eventually executed. 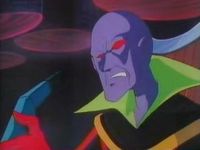 Mr. K in the Warrior of Love Rainbowman anime

Mr. K also appears in the 1982 anime adaptation of Warrior of Love Rainbowman. He sports a drastically different appearance, with purple skin, red eyes, and a multi-colored collared outfit.