Onikabuton (オニカブトン,   Onikabuton), is a demonic kaiju created by Toho that first appeared in episode 14 of the 1973 tokusatsu television program, Warrior of Light Diamond Eye, episode being titled A New Enemy: Princess Cobra.

Onikabuton's appearance seems to be based off of an oni (Japanese demon), as his name might imply. He is a red, anthropomorphic creature with a yellow underbelly, a small mustache and beard, large eyebrows, and pointed ears, as well as several horns protruding from his head and arms. He also commonly wears a red or blue scarf around his neck and he wears purple shorts and a green belt.

Onikabuton runs as a #2 in command for the Zensei Majin gang. He often acts as a Zensei Majin captain, possessing sound leadership skills and frequently gives candid advice to his masters. He doesn't have any proficient skills in combat, but he will do his best to retaliate if attacked.

Onikabuton first appeared as a man named Kiruto (キルト,   Kiruto). Onikabuton was summoned after King Cobra was injured in the previous episode to be a second in command for Princess Cobra who was summoned as well to take King Cobra's place. He tries to help Princess Cobra find a method to defeat Diamond Eye, but to no avail, as Rai helps him out of their trap. 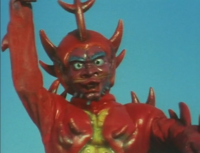 Onikabuton as Kiruto sent out with Princess Cobra and Wareatama to kidnap a large group of children and use a special chair to infect them with Human Condition, to ultimately turn them into Cow People, but oddly not Horse People. The children were infected and attacked Kotaro Rai, before retreating into their origin building, luring Kabo-Ko and Goro. Goro was taken and put in the chair, while Kabo-Ko escaped and Rai arrived just in time, only to be attacked by the infected children and Goro.

Rai was eventually able to steal Geruba's machine gun and use it to destroy the chair before summoning Diamond Eye who used his Spirit Cleansing Ray to disinfect the children and Goro. Diamond Eye then fired his Inner-Soul Illumination Beam at the evildoers, revealing their true forms. Onikabuton and Princess Cobra were both outmatched. Onikabuton was knocked unconscious and Princess Cobra was forced into retreating. Diamond Eye finally fought Wareatama, who used his "Wareatama Lightning Sword" attack against Diamond Eye. Eventually, Diamond Eye was able to break free from it and destroy Wareatama with the Royal Punch. 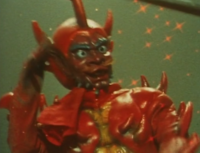 Onikauton as Kiruto was sent out with Satan Bat, who was disguised as an unnamed man to use a special pistol to mutate a large group of police officers into Cow and Horse People. The plan worked, and so they lured Kotaro Rai and Diamond Eye into attacking them, and they were both ambushed by these said police officers. Rai was able to escape, but Diamond Eye was buried in an avalanche. Rai was attacked by the police again, and Diamond Eye was eventually able to break free from the rocks and disinfect the officers with his Spirit Cleansing Ray.

Diamond Eye then fired his Inner-Soul Illumination Beam, and reveal Onikabuton and Satan Bat's true forms. After a short while, Onikabuton retreated from the fight, leaving Satan Bat behind, and so Satan Bat was destroyed with the Royal Punch. 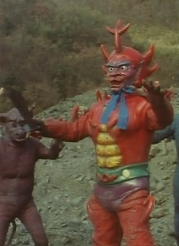 After Onikabuton kidnapped Kaboko and crucified her, and strapped dynamite onto the crucifix in the previous episode, Diamond Eye threw the TNT elsewhere and freed Kaboko. Shortly thereafter, a disguised Onikabuton and a group of bandits appeared, and so Diamond Eye fired his Inner-Soul Illumination Beam at the evildoers, revealing their true forms. The combatants were easily taken out, and Diamond Eye fought Onikabuton. While Onikabuton wasn't very good in combat, he was able to get Diamond Eye to slip and fall down a small cliff. Diamond Eye stunned Onikabuton with a Throwing Diamond and then finished him with the Royal Punch. Princess Cobra summoned Kerarin to avenge his death, but Kerarin was discovered and outmatched as well.

Onikabuton is frequently seen wielding some sort of double-sided scythe, with upside down blades.

Onikabuton is capable of quick teleportation.

32 months ago
Score 0
The Devil and a red dragon had a baby and gave it to King Cobra .
Permalink
↑ back to top ・ contents
Retrieved from "http://wikizilla.org/w/index.php?title=Onikabuton&oldid=148581"
Categories: