Hitodetsubo (ヒトデツボ,   Hitodetsubo) is a kaiju created by Toho that first appeared in episode 3 of the 1973 tokusatsu television program, Warrior of Light Diamond Eye, episode being titled Operation Hurricane Ready!

Hitodetsubo is a plump, bluish green-colored monster with a large belly in the shape of a spider's abdomen. His waist-down is entirely covered in brown hair, and he has a short, cow-like tail. He also has red eyes and flaming red hair.

Hitodetsubo is very brutish and attempts to take on his enemies with full throttle. When Hitodetsubo encounters an enemy, he will always use whatever he can to take them out, including weapons, superpowers, and even simply brute strength. 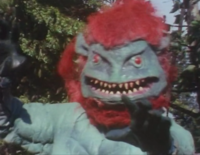 Hitodetsubo first appeared as a human was a motorbike-riding gunman known only by the nickname One-Eyed Tiger (片目のタイガー,   Katame no Taigā). He was assigned by King Cobra to assassinate a man at an amusement park, but was stopped in the act by Kotaro Rai. However, when cornered at gunpoint Rai summons his protector Diamond Eye. Diamond Eye fires an Inner-Soul Illumination Beam out of his eyes and directly at One-Eyed Tiger, whose human disguise is destroyed upon being hit. Now revealed to be Hitodetsubo, the monster commands a legion of Cow and Horse People to attack, whilst he attempts to escape. But, Rai runs after him and is attacked by Hitodetsubo, who begins spraying an acidic substance from his stomach. Luckily, Rai is able to evade the blasts and Diamond Eye takes over for him. The hero leaps into a nearby tree, throws his cape over Hitodetsubo's head, and stabs the monster in the stomach, resulting in the acid stored within it spraying out. With a single Royal Punch to the head, Hitodetsubo is drained of his bodily fluids, and becomes reduced to nothing but a lifeless corpse. 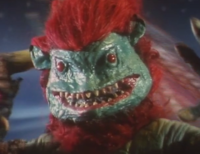 Hitodetsubo in Chase the Mastermind!

Hitodetsubo was reincarnated as a woman named Ten (貂,   Ten) and was sent to assassinate Kotaro Rai alongside Satan Bat. The first attempt was in a tower, when Raiko was conversing with a local resident in search of Gen Kai Ryu (King Cobra) and Satan Bat tried to shoot Rai from another building. However, this attempt failed and he ended up shooting the other man instead.

Rai notices the two evildoers and goes on a chase. Rai chases them into an amusement park, where they both attempt to kill Rai, and eventually they almost do, until he summoned Diamond Eye who fired his Inner-Soul Illumination beam to reveal Satan Bat and Hitodetsubo's true forms. After a short fight, Diamond Eye was able to take out Hitodetsubo with the Royal Punch, but before he could finish Satan Bat, he used his fire breath to attack Diamond Eye. Eventually, the monster tired itself out and Diamond Eye finished Satan Bat off with the Royal Punch. The last part of the fight wasn't seen until the next episode. 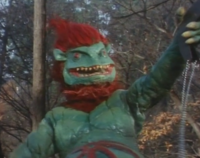 Hitodetsubo was reincarnated as a man named Momota Jukucho (百田塾長,   Momota jukuchō) who was a scientist trying to find a way to transform unsuspecting visitors and children into Horse and Cow People. He was able to find a way using a special smoke inside of a jar, and he turned countless people in a hospital into Horse and Cow People. Eventually, Rai was ambushed by the infected humans and summoned Diamond Eye who used his Spirit Cleansing Ray to disinfect the people. Momota and Rankha (Princess Cobra) who was currently present retreated from the building, but Diamond Eye quickly caught up and used his Inner-Soul Illumination Beam to reveal their true forms, Hitodetsubo and Princess Cobra.

Diamond Eye was unable to defeat Hitodetsubo who repeatedly teleported and retreated. Diamond Eye then fell into a conveniently placed trap of quicksand and dropped his Diamond Stick, which Princess Cobra then tried to steal but Rai stopped her and eventually Diamond Eye retrieved the Stick and flew out. Princess Cobra tried to use the Dark Ghost to defeat Diamond Eye, but to no avail and so she retreated. 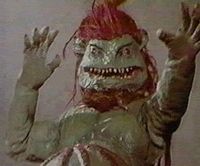 Hitodetsubo was reincarnated as a doctor named De Mura (デムラ,   De Mura) who was sent with Princess Cobra to ambush Kotaro Rai at a hospital. De Mura set Rai up for Princess Cobra, who attacked Rai in one of the rooms. The reason Rai was in the hospital to begin with isn't known.

Princess Cobra then took Rai to a special chair that could tranform any creature into a Horse or Cow Person, but for an unknown reason, Rai wasn't effected by this and he was eventually able to summon Diamond Eye who fired his Inner-Soul Illumination Beam at the attackers, revealing Hitodetsubo, Princess Cobra, and Onikabuton (who happened to be present in the room)'s true forms. Princess Cobra and Onikabuton quickly retreated and Diamond Eye chased Hitodetsubo outside, where the two fought each other.

Hitodetsubo quickly injured Diamond Eye and dragged him into King Cobra's lair, where he used his Great Tornado from Hell attack, and the episode ended in a cliffhanger, but in the next episode, Diamond Eye is seen escaping from the lair and killing Hitodetsubo with the Royal Punch.

Hitodetsubo was reincarnated as a man of the name Dogura (ドグラ,   Dogura) who was sent alongside Princess Cobra to kidnap Kotaro Rai's friends, Kaboko and Goro. They successfully do so in an ambush and King Cobra holds them at gunpoint. Rai disguises as one of the bandits to access King Cobra's special room, and sees his friends being tortured. Rai steals Gen Kai Ryu (King Cobra)'s gun and holds him at gunpoint, but not for long, as Dogura enters the room and ties up Rai. Rai then summons Diamond Eye who fires his Inner-Soul Illumination Beam at the evildoers, revealing their true forms. Diamond Eye then frees the trio and they retreat.

Diamond Eye had a short fight with Princess Cobra and Hitodetsubo as King Cobra was present in the room. King Cobra activated a trap door beneath Diamond Eye, leading him into King Cobra's secret lair, where Diamond Eye was attacked by Mojingah, Hitodetsubo, Kerarin, Wareatama, Gerarachin, a Cow Person, and a Horse Person. After a shortish battle, Diamond Eye was able to get the group to pile together and destroy all of them with a single Royal Punch.

Hitodetsubo's first disguise was a man named One-Eyed Tiger, who was armed with a whip and an Uzi, a pistol, and a Tommy Gun.

Hitodetsubo can spray an acidic liquid or mist from his stomach which can break down any substance in a matter of seconds.

Hitodetsubo's second disguise was a woman named Ten, who was armed with a machine gun. Strangely enough, Hitodetsubo in his true form was voiced by a woman as well.

Hitodetsubo often wields a chain with two boomerang-shaped blades on each end.

The third Hitodetsubo was capable of quick teleportation.

The fourth Hitodetsubo was capable of creating a large tornado around his enemies. The episode's title calls this ability the "Great Tornado from Hell".

37 months ago
Score 0
Why does he have a starfish on his crotch.
Permalink
↑ back to top ・ contents
Retrieved from "http://wikizilla.org/w/index.php?title=Hitodetsubo&oldid=148732"
Categories: