Wareatama (ワレアタマ,   Wareatama) is a kaiju created by Toho that appeared in episode 5 of the 1973 tokusatsu television program, Warrior of Light Diamond Eye, episode being titled The Vanished 2 Billion!

Wareatama is a green, alien-like monster, with large orange eyes, two fangs, and a tail.

Wareatama is more desperate to assassinate his target than any of the other Zensei Majin. He will chase down his target no matter what it takes and do his best to slay them. 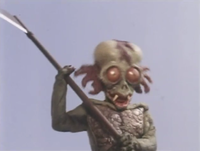 Wareatama in The Vanished 2 Billion!

Wareatama appeared as a magician named Beheading Jaguar (首切ジャガー,   Kubiki jaga) who was sent to assassinate Kotaro Rai. Rai escaped from the many attempts Beheading Jaguar tried to kill him, however in their last fight, Kero Cat dropped a bomb that coated Rai in a sticky goop of sorts, leaving him stuck to the ground. Rai was able to pull his hand out of his glove to summon Diamond Eye who revealed the true forms of the Zensei Majin with his Inner-Soul Illumination Beam.

Wareatama pulled out a sword for combat. After a short period of time while fighting, Wareatama lost his sword and grabbed his scythe. He stumbled into Rai, who grabbed his leg, preventing him from moving. Wareatama tried to chop Rai's arm off but Diamond Eye covered it in a protective energy shield with a different variation of his Stick Ray. Wareatama was then destroyed by Diamond Eye's Royal Punch. 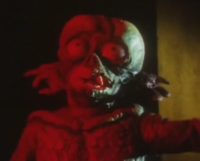 Wareatama in The Jewelry Exhibition Conspiracy!

After Satan Bat and Hitodetsubo's defeat in the previous episode, Wareatama was summoned as a man of the name Viper (バイパー,   Baipa) who was sent to capture Kotaro Rai for execution. Eventually, Viper was able to do so and Rai was tied to a crane above water, where Rai would be dipped into the ocean to drown. As much as Rai struggled, he was unable to escape.

Gen Kai Ryu (King Cobra), a bunch of bandits, and Viper all watched as Rai was almost in the water, but he was able to summon Diamond Eye who helped him out of the deadly trap and fired his Inner-Soul Illumination Beam, revealing the monsters' true forms. As usual, King Cobra escaped unscathed as Diamond Eye was left to fight Wareatama and fellow Horse and Cow People, who were all destroyed, including Wareatama, who was easily finished with the Royal Punch.

Wareatama was reincarnated as an unnamed criminal, who was sent with Gerarachin to simply kill Kotaro Rai alongside multiple Horse and Cow People who were disguised as bandits. This ambush failed and Rai was able to take out the bandits, and summoned Diamond Eye to take care of Gerarachin and Wareatama, who were outmatched when Diamond Eye used his Wind of Justice attack and they both retreated, never to be seen in the episode again. 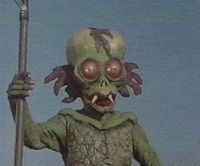 Wareatama was reincarnated as a man named Geruba (ゲルバ,   Geruba) who was sent out with Princess Cobra and Onikabuton to kidnap a large group of children and use a special chair to infect them with Human Condition, to ultimately turn them into Cow People, but oddly not Horse People. The children were infected and attacked Kotaro Rai, before retreating into their origin building, luring Kabo-Ko and Goro who saw them. Goro was taken and put in the chair, while Kabo-Ko escaped and Rai arrived just in time, only to be attacked by the infected children and Goro.

Rai was eventually able to steal Geruba's machine gun and use it to destroy the chair before summoning Diamond Eye who used his Spirit Cleansing Ray to disinfect the children and Goro. Diamond Eye then fired his Inner-Soul Illumination Beam at the evildoers, revealing their true forms. Onikabuton and Princess Cobra were both outmatched and Diamond Eye finally fought Wareatama, who used his "Wareatama's Art of Seeing Double" attack to disorient Diamond Eye, and then he used his "Wareatama Lightning Sword" attack against Diamond Eye, leaving him temporarily stunned, until Rai ran his motorcycle into the attack's radius and stopped the attack so Diamond Eye could destroy Wareatama with the Royal Punch.

Wareatama's first disguise was a human named Beheading Jaguar who has a double-sided scythe with upside-down blades and two boomerang-shaped blades.

Wareatama can fire a ball of energy from his mouth which he can shape into a short sword.

The third Wareatama had the ability to make his opponent see two of him, despite of there only being one. This is used to disorient his enemies. This ability is dubbed "Wareatama's Art of Seeing Double".

The third Wareatama could point his sword at enemies and they would be shocked by electricity with seemingly no origin. This attack is dubbed the "Wareatama Lightning Sword".

Wareatama's third disguise was a human named Geruba, who was armed with a machine gun.


↑ back to top ・ contents
Retrieved from "http://wikizilla.org/w/index.php?title=Wareatama&oldid=148008"
Categories: