Satan Bat is always very determined to defeat his foes, and will put all of his strength into doing so. He is extremely vicious and cunning, but always seems to be defeated with ease. 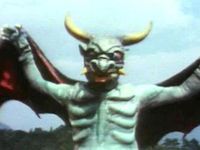 The first incarnation of Satan Bat went under the name Chin (陳,   Chin), and was summoned by King Cobra to ambush the newfound target Kotaro Rai. Chin and a large group of disguised soldiers made their way to a waterway where Rai and his love interest Kyoko were talking, and chase them over a bridge. Rai begins to fight with the attacking men as Kyoko runs off on her own. As Raiko struggles to fend off the soldiers, his situation is worsened when Chin begins throwing shurikens at him. He begins to flee to a nearby cliff as more shurikens whiz past him.

Once arriving at the cliff, it becomes apparent that the soldiers had captured Kyoko, and were threatening to shoot her. Raiko continues trying to fight back, but is flipped over the cliff side by one of the bow staff-wielding men. As Raiko is plummeting to the ground, he quickly screams out for Diamond Eye, who swoops in and catches Rai in mid-air. With Rai to safety, Diamond Eye returns to the cliff and attacks the evildoers. Chin tried to use of his shurikens on Diamond Eye, but it was sliced into two by the Diamond Stick.

Diamond Eye begins firing his Inner-Soul Illumination Beam at the men present. One such person caught in Diamond Eye's fire is Chin, who transmogrifies into Satan Bat. The monster sends Diamond Eye stumbling backwards with a blast of flame from his mouth, then flies into the air and begins raining down small explosives. However, Satan Bat is effortlessly destroyed with a single Royal Punch from Diamond Eye's Diamond Stick. 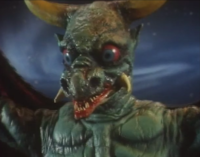 Satan Bat in Chase the Mastermind!

Satan Bat was reincarnated as a man named Sue (陶,   Sue), and was sent with a reincarnated and disguised Hitodetsubo to assassinate Kotaro Rai. The first attempt was in a tower, when Raiko was conversing with a local resident in search of Gen Kai Ryu (King Cobra) and Sue tried to shoot Rai from another building. However, this attempt failed and he ended up shooting the other man instead.

Rai notices the two evildoers and goes on a chase. Rai chases them into an amusement park, where they both attempt to kill Rai, and eventually they almost do, until he summoned Diamond Eye who fired his Inner-Soul Illumination beam to reveal Satan Bat and Hitodetsubo's true forms. After a short fight, Diamond Eye was able to take out Hitodetsubo with the Royal Punch, but before he could finish Satan Bat, he used his fire breath to attack Diamond Eye. Eventually, the monster tired itself out and Diamond Eye finished Satan Bat off with the Royal Punch. The end of the battle wasn't seen until the next episode. 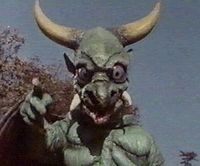 This didn't last for long, as Rai used his ring to distract one of the Cow People, breaking Diamond Eye free of the trap. Diamond Eye then used his Wind of Justice attack to kill the Horse and Cow People and after a short and easy fight, finished Satan Bat with the Royal Punch. 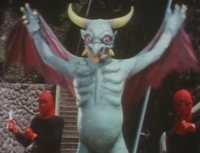 Satan Bat was reincarnated as an unnamed man and was sent with Onikabuton to use a special pistol that could mutate a large group of police officers into Cow and Horse People. The plan worked, and so they lured Kotaro Rai and Diamond Eye into attacking them, and they were both ambushed by these said police officers. Rai was able to escape, but Diamond Eye was buried in an avalanche created by one of the police officers firing a rocket launcher. Rai was attacked by the police again, and Diamond Eye was eventually able to break free from the rocks and disinfect the officers with his Spirit Cleansing Ray.

Diamond Eye then fired his Inner-Soul Illumination Beam, and revealed Onikabuton and Satan Bat's true forms. After a short while, Onikabuton retreated from the fight, leaving Satan Bat behind, and so Satan Bat was eventually destroyed with the Royal Punch after a short fight. 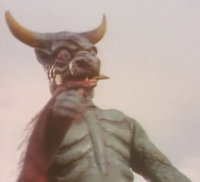 Satan Bat was reincarnated as a man of the name Geran (ゲラン,   Geran) who was sent to kidnap Kotaro Rai's friends, Kaboko and Goro and crucify them. Rai is eventually led to their location, only to be outnumbered by bandits alongside Princess Cobra, Onikabuton, Geran, and King Cobra. Rai was then crucified as well, and his ring to summon Diamond Eye was taken from him, by Princess Cobra.

Rai almost successfully talks Princess Cobra into giving him the ring, but she was stopped by King Cobra. Despite of this, the magical ring levitated back to Rai and so he summoned Diamond Eye, who fired his Inner-Soul Illumination Beam, revealing a large number of Horse and Cow People, as well as Satan Bat, Princess Cobra, King Cobra, and Onikabuton's true forms.

Princess Cobra retreated and Diamond Eye fought Satan Bat and Onikabuton as the rest of the gang fought the combatants. Diamond Eye was able to cut Satan Bat's wings off and kill him with the Royal Punch. Diamond Eye hit Onikabuton and made him fall off the edge of a cliff, and he then fought King Cobra, who successfully had Diamond Eye weakened, until he was electrocuted by lightning.

Satan Bat's first disguise was a man named Chin, who had a seemingly infinite supply of shurikens.

Satan Bat is capable of flying with his wings.

Satan Bat is capable of spewing a stream of fire from his mouth.

The first Satan Bat was capable of firing small dart-shaped explosives from his mouth, and does so whilst in flight.

Satan Bat's second disguise was a man named Sue, who was an assassin armed with a machine gun.

The second Satan Bat was capable of creating a large gust of wind by flapping his wings.

The second Satan Bat wielded a club that can be ignited at any given moment. He can also telekinetically levitate it.

Satan Bat's third disguise was a rugged and caped man named Condor, who had the ability to fly.


↑ back to top ・ contents
Retrieved from "http://wikizilla.org/w/index.php?title=Satan_Bat&oldid=167861"
Categories: