Kerarin (ケラリン,   Kerarin) is a kaiju created by Toho that first appeared in episode 4 of the 1973 tokusatsu television program, Warrior of Light Diamond Eye, episode being titled Don't be Discouraged, Raiko.

Kerarin is a blue, vaguely humanoid creature with yellow-colored hair, and wears a white robe. Kerarin also seems to have a permanent smile.

Kerarin acts very psychotic and spastic during battle, stumbling around the area while swinging his weapon and laughing. He has a very strong desire to kill and will stop at nothing to do so. 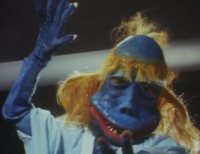 Kerarin in Don't be Discouraged, Raiko

Kerarin first appeared disguised as a gunslinging bandito and took up the name Machine Gun Joe (マシンガンのジョー,   Mashin Gan no Jō). Under this alias, Kerarin was hired by King Cobra to spy on and ambush Kotaro Rai. A short time after being assigned to his mission, "Machine Gun Joe" attacked Raiko with a gang of King Cobra's men. However, the attempt was unsuccessful as Raiko was able to take down all the men, including a disguised Kerarin, and escape on his motorcycle.

Shortly thereafter, Raiko was escorted at gunpoint to another group of readied attackers. Among them was a recovered Machine Gun Joe, and together they were all able to bring Raiko to near death. With all the strength left in him, Raiko was able to slowly crawl from the Zensei Majin's clutches long enough to summon Diamond Eye. Said hero appeared immediately at the scene and fired the Inner-Soul Illumination Beams from his eyes, which caused Machine Gun Joe's disguise to be destroyed upon contact with him. The beams were also used on the other men, which revealed multiple Horse and Cow People as well as King Cobra to be present in the room.

Kerarin clumsily stumbled around the area, but he did attempt to attack Diamond Eye multiple times; however, Kerarin's only posed threat was his sharp claws, capable of executing a victim with a single strike at the throat. Kerarin met his demise when he tried to attack Diamond Eye from the back, but was grabbed and thrown out a window then destroyed in mid-air with a Royal Punch. 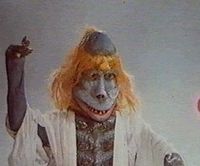 Kerarin was reincarnated as a man of the name Killer Saturn (殺し屋サターン,   Koroshi-ya satān) who was sent out to assassinate Kotaro Rai in an alleyway. This attempt failed and Kotaro Rai was able to escape unscathed. After this, another man gets caught up in the incident and attempts to find Killer Saturn and bring him to justice. However, the tables turn when this said man is ambushed by Killer Saturn, a bunch of disguised Horse and Cow People as well as a disguised King Cobra.

The man is brutally beaten and stabbed multiple times, but is still gripping on to life. Rai eventually catches up with these evildoers and summons Diamond Eye who quickly falls into a trap and is sent down a bottomless pit. Rai takes off his ring and throws it down to Diamond Eye, who catches it and is given enough energy to fly out of the pit. Diamond Eye then fires his Inner-Soul Illumination Beam, revealing Kerarin's true form. King Cobra quickly escapes.

As Diamond Eye is trying to fight a rambunctious Kerarin, the already horribly beaten, stabbed and even shot man is finished off and stabbed in the heart by Kerarin. Immediately afterwards, Kerarin is destroyed with the Royal Punch after successfully dodging a first one. 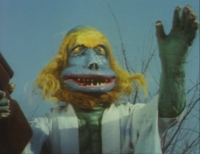 Kerarin was reincarnated as a clown named Number K-12 (K12号,   K 12-gō) and was sent by Princess Cobra to assassinate Kotaro Rai in an amusement park, after Onikabuton was killed by Diamond Eye. Number K-12 frequently gives information to Princess Cobra via a handheld transceiver that's disguised as a lollipop. Number K-12 entertains a group of children, while simultaneously trying to spy on Goro, who stumbled into the scene as Rai and Kaboko ran off in suspicion of the park, and are ambushed by a bunch of bandits are are held hostage in a small room.

Goro tried to find the two and accidentally collided with Number K-12, who unknowingly dropped his secret transceiver as Rankha (Princess Cobra) was talking through it. Goro noticed this and followed K-12 into a sewer system, where he was caught and kidnapped. Goro was then held hostage in a different room.

Rai was eventually able to summon Diamond Eye who freed the trio and went after K-12. When Diamond Eye found him, he fired his Inner-Soul Illumination Beam, revealing Kerarin's true form. Kerarin tried using his weapon on Diamond Eye but to no avail. He was then stabbed with the Diamond Stick and then destroyed with the Royal Punch.

Kerarin's first disguise was a man named Machine Gun Joe who often wields, as his would imply, a machine gun.

Kerarin possesses sharp, deadly claws which can kill an opponent with one slash and even cut through metal.

Kerarin possesses the ability to teleport.

Kerarin's second disguise was a man named Killer Saturn, who had a seemingly infinite supply of small throwing daggers.

The second Kerarin wielded a sharp knife that could reflect Diamond Eye's Stick Ray into a blinding light on contact.

The third Kerarain possessed a large, red gun that could fire explosives.

The third Kerarin had a black belt, which he could take off and shape into a metal quarterstaff.

23 months ago
Score 0
Iiiiih.... This is scary!
Permalink
↑ back to top ・ contents
Retrieved from "http://wikizilla.org/w/index.php?title=Kerarin&oldid=148943"
Categories: