In his base form, Core-Braver is a sleek white and silver humanoid machine with bright yellow eyes and a powerful red laser in his chest. 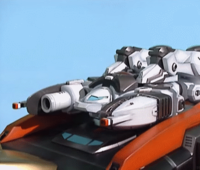 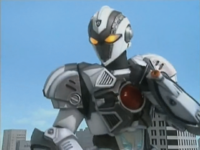 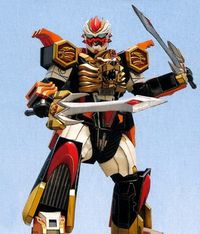 A fusion of Core-Braver and the Adle Eagle ship, Wind-Eagle is a gun-wielding form of Core-Braver. It is faster and more agile than Great-Lio and is used for ranged attacks and quick strikes.

The Core-Caliber can fly at Mach 20.

Core-Braver has a powerful laser cannon in his chest called the Core-Buster.

Core-Braver has a six-cell rocket launcher located above his knee called the Brave-Shot.

This is a list of references for Core-Braver. These citations are used to identify the reliable sources on which this article is based. These references appear inside articles in the form of superscript numbers, which look like this: [1]


↑ back to top ・ contents
Retrieved from "http://wikizilla.org/w/index.php?title=Core-Braver&oldid=171636"
Categories: