A descendant of the original Mothra that attacked Tokyo and New Kirk City in 1961, this Mothra traveled to Japan alongside the Shobijin in 2004 to warn Shinichi Chujo that the JSDF's use of Godzilla's remains to build Kiryu was immoral and that she would be forced to declare war on humanity if the remains were not returned to the sea. The Shobijin promised that Mothra would defend Japan against the second Godzilla in Kiryu's place if her demands were met. While Mothra's pleas were unheeded, she nevertheless appeared in Tokyo to battle Godzilla when he came ashore. Kiryu was launched into battle to aid Mothra, who was seriously wounded in the battle. Mothra's twin larvae arrived in Tokyo to assist their mother, but she was killed when she deflected a blast of Godzilla's atomic breath that was aimed at her offspring. 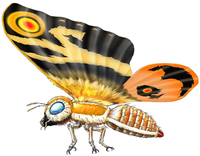 Requests for Mothra to make an appearance in the sequel to Godzilla Against Mechagodzilla came directly from Toho, following the logic that Mothra continued to be one of the company's most popular kaiju while the previous film had already indicated that the events of her debut film occurred in its continuity.[4] While Mothra and Mechagodzilla were both recurring monsters in the Godzilla series and considered among Toho's "Big Five" most popular monsters, Godzilla: Tokyo S.O.S. would mark their first onscreen appearance together. Mothra's role in the story was written as a direct tribute to 1964's Mothra vs. Godzilla, in which the imago Mothra is killed in battle with Godzilla before her twin larvae ultimately defeat him.[4] However, this film featured the addition of Kiryu into the battle between Mothra and Godzilla.

Shinji Nishikawa designed the imago Mothra as well as her larvae. The imago Mothra's design was based on the First Generation Mothra with the exception of her legs, which were made longer and more detailed.[5] Model producer Shinichi Wakasa considered using Rainbow Mothra as a design base early on, as he really liked the mix of warm and cool colors of its wings. However, after a talk with director Masaaki Tezuka, Wakasa ended up creating a more traditional Mothra model akin to the 1961 version.[6] The imago prop was 3.7 meters long and covered in fur imported from the United States. While in past films imago Mothra props had only been suspended from above by piano wire, this prop had wires attached to both the top and bottom to compensate for the weak downward flapping motion of Mothra's wings in prior films. In addition, the staff were able to adjust the weight loaded inside of the prop according to how strong they wanted Mothra's wings to be flapping in a given scene, making the flapping of Mothra's wings appear more natural.[4] This prop was reused for Mothra's appearance in Godzilla: Final Wars the following year, with only slight alterations made to its head. A 3D computer-generated model was also created to depict the imago Mothra in flight for some shots. This model was created using detailed photographs of the prop provided by MONSTERS Inc.[5]

This incarnation of Mothra is made to resemble the original 1961 Mothra, retaining its slimmer build and fluffy hair all over its body. This Mothra's hair is longer than that of most previous incarnations, and is mostly white and brown. Her wing design is reminiscent of the original Mothra, with a similar pattern and primarily orange, black and yellow coloration. This Mothra possesses long, hair-covered antennae and round, bright blue eyes. Compared to the original Mothra, this Mothra's legs are much longer and more detailed.

Mothra is a benevolent creature concerned with preserving the natural order of Earth. While she prefers to coexist peacefully with humanity, she is offended at mankind's use of the original Godzilla's remains to build the anti-Godzilla weapon Kiryu. Through her Shobijin, Mothra communicates that she will be forced to declare war on humanity should they refuse to return Godzilla's remains to the sea. Despite these threats, Mothra ultimately comes to Japan's aid and battles Godzilla, even though Kiryu is still in commission. Mothra later gives up her life to defend her newborn larvae from Godzilla.

This Mothra is a descendant of the original Mothra that attacked Tokyo and New Kirk City in 1961. In 1999, this Mothra or possibly one of her ancestors did battle with King Ghidorah, cooperating with the JSDF to defeat the three-headed monster.[3] Mothra normally lives on Infant Island peacefully with her Shobijin, but travels to Japan in 2004 after becoming aware that the JSDF has used the remains of the original Godzilla to construct a weapon.

Mothra was sighted flying over the skies of Japan, prompting two fighter jets to try and shoot her down. Mothra was unaffected by the jets' missiles and continued flying to Japan. Mothra landed near the home of Shinichi Chujo, a man who had helped reunite the original Mothra with her Shobijin in 1961. The Shobijin appeared to Chujo and asked him to tell the government to scrap the Kiryu project, which utilized the remains of the first Godzilla as a weapon. The Shobijin claimed this was a crime against nature and the sanctity of life, and that Mothra would be forced to declare war against humanity if the first Godzilla's remains were not returned to the sea. They also promised that Mothra would take it upon herself to defend Japan from Godzilla. When Chujo told his story to Prime Minister Hayato Igarashi, he regretfully told Chujo that the government could not afford to scrap the project, as too much had already been sacrificed for it. When Godzilla appeared in Tokyo, Chujo's grandson Shun used school desks to recreate Mothra's symbol and summon her to Tokyo. Mothra engaged in battle with Godzilla, but due to her old age was easily overwhelmed. Igarashi ordered Kiryu to be launched to aid Mothra, and the machine entered the battle as well. Godzilla defeated Kiryu, while Mothra's egg on Infant Island hatched into two twin larvae. The larvae arrived in Tokyo to communicate with their mother, but Godzilla noticed them. Godzilla fired his atomic breath at the larvae, only for Mothra to fly in front of the beam, sacrificing herself for her children. Enraged with grief, the larvae attacked Godzilla, and with the assistance of Kiryu were able to defeat him.

Mothra pushes Godzilla back with wind produced by her wings.

Mothra can flap her wings rapidly to produce powerful hurricane-force winds that are capable of knocking Godzilla off his feet.

Mothra uses her claws to grab onto Godzilla's head and scratch at his face.

Mothra's weapon of last resort is to release a cloud of golden scales from her wings. These scales seem to impede and weaken Godzilla, as well as cause his atomic breath to explode back in his face. Using the scales causes Mothra to lose her ability to fly.

Mothra is set on fire and killed by Godzilla's atomic breath.

Mothra is physically weaker than Godzilla, and is easily overpowered by him in physical combat. Godzilla is able to blast off part of Mothra's wing with his atomic breath, as well as bite off one of her legs. Mothra is eventually destroyed by a direct blast of Godzilla's atomic breath. Using her scales also causes Mothra to lose her ability to stay airborne.

This is a list of references for Mothra/Tokyo S.O.S. (Imago). These citations are used to identify the reliable sources on which this article is based. These references appear inside articles in the form of superscript numbers, which look like this: [1]

↑ back to top ・ contents
Retrieved from "http://wikizilla.org/w/index.php?title=Mothra/Tokyo_S.O.S._(Imago)&oldid=147087"
Categories: