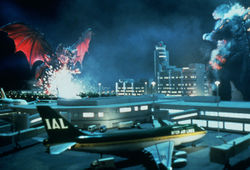 Destoroyah confronts Burning Godzilla in front of a parked IAL 747

Inter Air Lines (インター·エアラインズ,   Intā Earainzu) is a fictional airline company that appears in the 1995 Godzilla film, Godzilla vs. Destoroyah. They operate a fleet of Boeing 747s.

Flying out from the Haneda Airport in Tokyo, Japan, the 747s are disturbed as the battle between Godzilla and Destoroyah continues. Some of the planes are destroyed by beams shot by both monsters, and all flights stop for the time being after Godzilla is dragged along the Tarmac by Destoroyah.

↑ back to top ・ contents
Retrieved from "http://wikizilla.org/w/index.php?title=Inter_Air_Lines&oldid=174439"
Categories: