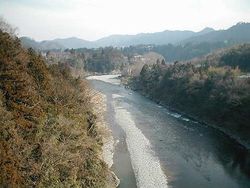 The Tama River (多摩川,   Tama-gawa) is a major river that borders Tokyo. It is featured in the 2016 Toho Godzilla film Shin Godzilla. 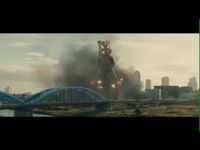 The JSDF confronts Godzilla at the Tama River in Shin Godzilla.

As Godzilla advanced on Tokyo in his fourth form, the JSDF prepared a defense line at the Tama River consisting of tanks, artillery, missiles, jets, and helicopters. As Godzilla drew closer, the JSDF sent helicopters that fired missiles and machine guns at Godzilla but failed to even scratch him. Tanks then began bombarding Godzilla and he appeared to slow down and change direction. Airstrikes and rockets from jets then hit Godzilla, but as the smoke cleared, Godzilla was revealed to be still standing and moving towards the tanks. After bombardment from more weapons, smoke was left in the area. Godzilla then kicked up a bridge spanning the river, demolishing the tanks and the JSDF's field headquarters.


↑ back to top ・ contents
Retrieved from "http://wikizilla.org/w/index.php?title=Tama_River&oldid=156060"
Categories: