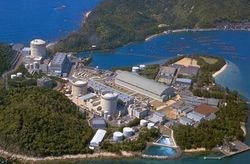 The Mihama Nuclear Power Plant (美浜発電所,   Mihama hatsudensho) is a nuclear power plant operated by the Kansai Electric Power Company, Inc. and is located in the town of Mihama, Fukui Prefecture, about 320 km west of Tokyo. It was destroyed by Godzilla, who sought radiation from the plant in The Return of Godzilla.

The JSDF put out an alert and searched for Godzilla. Soon, Godzilla landed on an island off the coast of Japan in the outskirts of Mihama, determined to feed on nuclear energy from the plant. Godzilla attacked and crippled the facility, killing large numbers of workers. Goro Maki, Hiroshi Okumura and Doctor Hayashida arrived near the plant just as Godzilla found the reactor. Godzilla proceeded to absorb the nuclear energy until he suddenly turned around and followed a migrating flock of birds away from the island and returned to the Pacific Ocean.


↑ back to top ・ contents
Retrieved from "http://wikizilla.org/w/index.php?title=Mihama_Nuclear_Power_Plant&oldid=174690"
Categories: