Adam Bindewald: “Gematron, huh? The ship leaders turn to the gods, as usual. Maybe even that new anti-Godzilla tactic was a leak from the higher-ups?”
Marco Ghione: “Man, are we going to fight it again? It's a monster that withstood an attack of 150 nuclear warheads at once. That's 40 megatons of nucleoplasm total!”
― Marco and Adam Bindewald, amidst discussing Godzilla and Haruo Sakaki's tactic against it. (GODZILLA: Planet of the Monsters)

Marco Ghione (マルコ・ジオーネ,   Maruko Jiōne) is a corporal and combat engineering troop aboard the emigrant spaceship Aratrum who first appeared in the 2017 animated Godzilla film, GODZILLA: Planet of the Monsters.

Marco Ghione, a corporal and combat engineering troop aboard the Aratrum, witnessed the open broadcasting of Haruo Sakaki, who had threatened to detonate the shuttle which he had locked himself in if the ship did not depart from Tau Ceti-e, believing the Central Committee were forcing elderly passengers to volunteer for a suicide mission to the planet's surface in order to reduce the number of mouths to feed.

Shortly after the anonymous publishing of Captain Sakaki's anti-Godzilla strategy, Marco began discussing the plan to return to Earth with Adam Bindewald. Adam expressed his skepticism regarding the plan, to which Marco reassured him that the subspace warp-jump required to reach Earth was indeed possible, according to a calculation done by the Aratrum's navigational system Gematron. Adam then asked Marco what he thought of the aforementioned Godzilla strategy and whether or not it could be a leak from the higher-ups, to which Marco responded by expressing his concerns about attempting to fight Godzilla, noting how the monster had previously survived a detonation of 150 nuclear warheads at once. Noticing Metphies walking by, the men refrained from continuing their conversation.

Later, after it was announced by Unberto Mori that the ship would be initiating a warp-jump to return to Earth, Marco quivered on a bench next to Yuko Tani and two maintenance soldiers. As the soldiers exclaimed in anticipation to finally see the Earth, Marco dejectedly questioned whether the jump was really safe.

Marco was one of the 600 soldiers that volunteered to travel to the Earth's surface to carry out Haruo's anti-Godzilla plan. Marco was seen surveying Godzilla's remains along with two other soldiers after the monster had been defeated. However, it turned out that the monster they had killed was simply a smaller offshoot of the original Godzilla, which had reached a height of over 300 meters and emerged from a nearby mountain. Godzilla quickly obliterated most of the United Earth's remaining forces, leaving Marco's fate unknown. 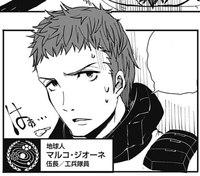 Marco Ghione in episode 1 of the GODZILLA: Planet of the Monsters manga

Marco Ghione makes an appearance in the first episode of the GODZILLA: Planet of the Monsters manga adaptation, where he plays almost the exact same role as in the film itself, discussing Godzilla and the newly-published anti-Godzilla strategy with Adam Bindewald, and later questioning the safety of the Committee's plan to warp-jump to Earth.

This is a list of references for Marco Ghione. These citations are used to identify the reliable sources on which this article is based. These references appear inside articles in the form of superscript numbers, which look like this: [1]

18 months ago
Score 0
How, he's barely talked about in the movie, I even had use my phone to look which character was there.
Permalink
You are ignoring the author of this comment
Show comment | Manage ignore list

18 months ago
Score 1
I wished they Fleshed out their Characters instead of Rushing to finish the movie in Production.
Permalink
↑ back to top ・ contents
Retrieved from "http://wikizilla.org/w/index.php?title=Marco_Ghione&oldid=163258"
Categories: