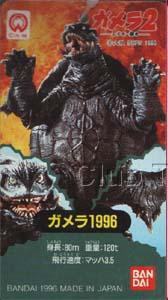 Bandai released a 10-inch tall electronic figure of Gamera from Gamera 2: Attack of the Legion. Pushing on its head causes the figure to roar, while pushing its limbs into its shell allow its wings to extend and recreate Gamera's flying form.[2]

This is a list of references for Gamera 2 (Bandai Japan Toy Line). These citations are used to identify the reliable sources on which this article is based. These references appear inside articles in the form of superscript numbers, which look like this: [1]

↑ back to top ・ contents
Retrieved from "http://wikizilla.org/w/index.php?title=Gamera_2_(Bandai_Japan_Toy_Line)&oldid=158976"
Categories: