Gamera: High Grade is a line of two-inch tall collectible Gashapon figures produced by Bandai. They were sold in vending machines and required minor assembly. 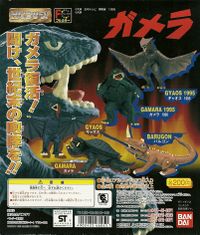 The first set of Gamera: High Grade figures was released in 1995 to commemorate Gamera's 30th anniversary and the release of that year's film, Gamera: Guardian of the Universe.[1] The figures included in the set are as follows: 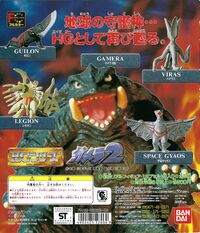 Set 2 was released in 1996 to coincide with the release of Gamera 2: Attack of the Legion.[2] It includes: 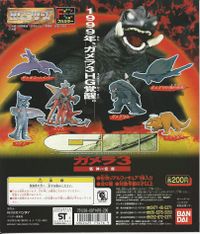 The third and final set was released in 1999 in conjunction with Gamera 3: Revenge of Iris. [3] Figures included in this set are:

This is a list of references for Gamera: High Grade. These citations are used to identify the reliable sources on which this article is based. These references appear inside articles in the form of superscript numbers, which look like this: [1]


↑ back to top ・ contents
Retrieved from "http://wikizilla.org/w/index.php?title=Gamera:_High_Grade&oldid=127928"
Categories: