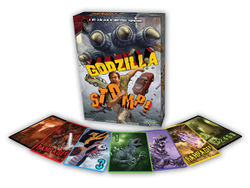 Godzilla: Stomp! is a card game manufactured by ToyVault and released in November 2011.

In this fast-paced game of citywide destruction, players pick from Godzilla, Mechagodzilla, Mothra, Battra, or Destoroyah, and compete to smash as much of the city as possible.

In Godzilla: Stomp!, players choose the ferocity of their attacks from round to round to rack up as much destruction as possible - attack early to smash a single building, or go on a rampage to destroy several at once! Lay waste to the high-value skyscraper, or hope to get a collection of power plants!

This lightweight card game includes 42 building cards and 30 monster attack cards, and is ideal for Godzilla gaming on the go. 2-5 players can play a speedy game of monster mayhem anytime, anyplace."

From the back of the box:
"Godzilla, the King of the Monsters, is on the loose again, along with four other kaiju: Mothra, Mechagodzilla, Battra, & Destoroyah! Together they compete to demolish the most buildings in the city, by sparring it out or going into a full-out rampage! There's nowhere to hide in this kaiju free-for-all!"

Godzilla: Stomp! was designed by Mike Kollross, the game's layout and design done by Zac Pensol, and the game's artwork was done by Chris Quilliams.

From the instruction manual:

Godzilla: Stomp! is played in a series of rounds, in which a number of Buildings will be revealed, and players will simultaneously choose their attack strength to destroy one or more buildings for the round. Play continues for a total of six rounds, at which point players add up their scores. The highest score wins.


↑ back to top ・ contents
Retrieved from "http://wikizilla.org/w/index.php?title=Godzilla:_Stomp!&oldid=159007"
Categories: