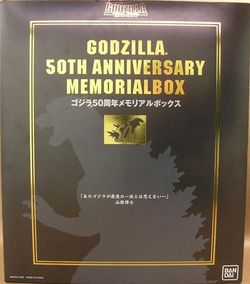 The Godzilla 50th Anniversary Memorial Box (ゴジラ５０周年メモリアルボックス,   Gojira 50-Shūnen Memoriaru Bokkusu) is a box-set of 20 6-inch Godzilla figures by Bandai Japan. It was released in January 2005. 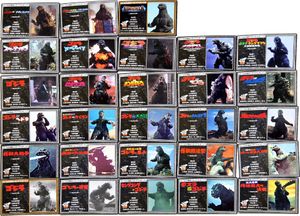 The 28 cards of the box set

This box set also features reissues of Godzilla 1954, Godzillasaurus (who was originally a part of the standard 8-inch line), King Ghidorah, Heisei Godzilla and Godzilla Junior from the Movie Monster Series, although their size and paint schemes are no different from previous lines.

Anguirus, Gigan, Godzilla 1974, Mechagodzilla 2, Rodan, Burning Godzilla and Godzilla 2000 were also reissued from both the Movie Monster and Toho Kaiju Series. However, these reissues of the figures are different from the other five reissues. Anguirus and Gigan were given new paint schemes; Anguirus is done in gray vinyl with black highlights and Gigan is done in black vinyl.

Godzilla 1974 is given two different sculpts, one in which it has an arm exposing metal underneath in order to resemble Mechagodzilla's Fake Godzilla disguise from Godzilla vs. Mechagodzilla, and one in a new green vinyl with a more ferocious face which is based on Godzilla's appearance from Terror of Mechagodzilla.

Like Gigan, Mechagodzilla 2 is done in black vinyl, with glossy black paint on various parts of the body, blue paint on the initials, orange for the number and the eyes and gold on the front.

Rodan is done in brown vinyl with beige highlights, therefore the figure is based on the regular version of the Heisei Rodan from Godzilla vs. Mechagodzilla II.

Burning Godzilla is done in red vinyl with orange highlights. It is supposedly meant to represent Godzilla as he melts down at the climax of Godzilla vs. Destoroyah.

Godzilla 2000 is not only given a new paint scheme, but is also rescaled. The figure is done in dark green vinyl with light green highlights and rose dorsal fins, whereas the Toho Kaiju Series Godzilla 1999 was done in black vinyl with purple dorsal plates. The new figure's coloration is based on Godzilla's appearance from Godzilla vs. Megaguirus, rather than Godzilla 2000: Millennium.

The box itself is 21-inches tall and just over 18-inches wide. The box is colored black with gold trim and lettering with Godzilla 2004's silhouette on the front of the box. The Memorial Box contains 28 cards featuring all 28 Toho Godzilla films released up to that point. The Toho license sticker is the gold 50th Anniversary sticker with the year 2004 on the bottom and is found on the front of the box. No tags are included with the figures.

23 days ago
Score 0
This is something i must have in my collection.
Permalink
You are ignoring the author of this comment
Show comment | Manage ignore list

39 months ago
Score -1
I'm just dying for this set, it has some of the best Godzilla figures ever, but it's so expensive...
Permalink
You are ignoring the author of this comment
Show comment | Manage ignore list

35 months ago
Score 0
I know right! Like a thousand dollars! I think i will just buy each one individually, that way its cheaper.
Permalink
You are ignoring the author of this comment
Show comment | Manage ignore list

27 months ago
Score 0
Actually, with each figure ranging from around 50-100+ dollars, it's more cheap to find one for a thousand dollars.
Permalink
↑ back to top ・ contents
Retrieved from "http://wikizilla.org/w/index.php?title=Godzilla_50th_Anniversary_Memorial_Box&oldid=158401"
Categories: