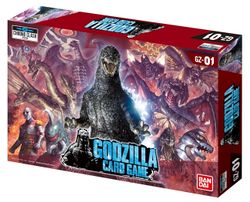 The Godzilla Card Game is an expandable competitive card game based on the Godzilla franchise and published by Bandai. The first set, released in September 2019, included four fixed 54-card decks, 24 Extra Deck Battlers (giant-sized cards), four turn sequence cards, four play mats, two single-card Tournament Packs, and a multi-language play manual. Its suggested retail price is $49.99 in the United States. Bandai will support the game with organized in-store play events beginning in October, while participating stores will receive Tournament Kits for these events that include materials for up to eight players, promotional posters, and prizes for tournament winners.[1]

The Godzilla Card Game is part of Bandai's Chrono Clash card game system, which has previously been used for a game based on the Naruto franchise. Decks can include cards from both the Godzilla and Naruto games in casual play, but not in tournaments.[2] It features a large roster of kaiju from the Godzilla franchise, with the majority of the cards utilizing artwork originally from the Godzilla-themed booster packs for the Japanese card game Battle Spirits. The game is not turn-based, but rather involves use of a "power resource track," with players moving a token back and forth based on the power of the cards they play and the position of the token determining when play passes to other players. The game can be played with two to four players, and is intended for players ages 6 and up. The game is said to take approximately half an hour to complete.

This is a list of references for Godzilla Card Game. These citations are used to identify the reliable sources on which this article is based. These references appear inside articles in the form of superscript numbers, which look like this: [1]

Showing 18 comments. When commenting, please remain respectful of other users, stay on topic, and avoid role-playing and excessive punctuation. Comments which violate these guidelines may be removed by administrators.

↑ back to top ・ contents
Retrieved from "http://wikizilla.org/w/index.php?title=Godzilla_Card_Game&oldid=154965"
Categories: