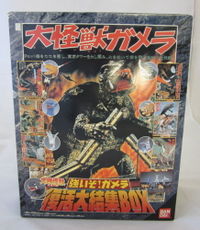 The Gamera Memorial Box is a box-set of seven 6-inch-tall Gamera figures released by Bandai Japan in 1999.

To tie in with the film Gamera 3: Revenge of Iris, Bandai produced 6-inch versions of the 8-inch figures from the company's original Gamera line, along with two new figures, Gamera 1965 and a new Zigra figure.