The Mysterians (ミステリアン,   Misuterian) are a race of aliens created by Toho that first appeared in the 1957 film The Mysterians.

The Mysterians' name comes from Mysteroid, the name given to their former homeworld by the human scientist Ryoichi Shiraishi.

The Mysterians generally resemble humans, but due to the lingering effects of Strontium-90, their bodies are covered in keloid scars, leaving them hideously disfigured. The Mysterians wear full-body cloaks and helmets, with the helmets obscuring most of their faces. These bodysuits appear to act as life-support suits, as when the Mysterians' helmets are damaged they are left incapacitated and gasping for air. The Mysterians' costumes are color-coded according to rank: the Mysterian Leader wears red, intermediate-ranking individuals wear yellow, and normal soldiers wear blue. When outside of their dome, the Mysterians wear even heavier suits, apparently meant to allow them to survive in Earth's atmosphere.

Fifty-thousand years ago, the Mysterians were a thriving technologically advanced civilization that inhabited the planet Mysteroid, located between Mars and Jupiter. A nuclear war broke out between the Mysterians, and the entire planet was destroyed as a result, leaving behind only several smaller asteroids. The surviving Mysterians relocated to Mars, where they lived for thousands of years. Eventually, the Mysterians determined that Mars was unsuitable for their people to continue living, so they decided to move to Earth instead. The Mysterians established a base of operations on Earth's moon, preparing to launch an invasion of Earth.

In 1957, the Mysterians secretly built a giant dome near Mount Fuji, which would soon become their ultimate weapon for bringing humanity to its knees. The Mysterians deployed a giant mecha called Moguera to attack several nearby villages. In the process, the Mysterians abducted the astrophysicist Ryoichi Shiraishi, who had proposed that Mysteroid had once existed between Mars and Jupiter. Moguera was finally destroyed when the JSDF rigged a bridge with explosives and detonated it as the mech tried to cross it. Determining that some force had been controlling Moguera with radio waves, the JSDF began searching the area around Mt. Fuji. The Mysterian's dome surfaced, and the Mysterian Leader broadcast a message asking to speak to several human representatives. The humans were brought inside, where they met with the Mysterian Leader. He claimed that the Mysterians only destroyed the villages as a show of power so humanity would not be tempted to attack them in the future. He requested that the Mysterians be granted a strip of land on Earth two miles in radius on which to live, as well as the right to mate with Earth women, some of whom they had already abducted. According to the Mysterian Leader, the Strontium-90 in his race's bodies left over from the nuclear war that destroyed their planet caused 80% of their newborn population to be born abnormal, after which the Mysterians would simply dispose of them. He believed that mating with Earth women would allow his race to begin producing viable offspring and rebuild its population. The Mysterian Leader dismissed the humans, warning that if their demands were not met they would be forced to initiate a war with humanity, one that with the Mysterians' advanced technology would result in the utter destruction of mankind.

After being informed of the aliens' demands, the Japanese government concluded that the Mysterians were not to be trusted and decided to attack them. Ryoichi Shiraishi, now living inside the Mysterians' dome, broadcast a message to mankind trying to persuade them to give in to the Mysterians' demands. He claimed that the Mysterians had no ulterior motives, and that for the sake of science mankind should make peace with the Mysterians. The JSDF ignored Shiraishi's plea and attacked the Mysterian Dome, but their weapons had no effect. The Mysterians promptly obliterated the humans' forces with a heat ray fired from the dome and lasers fired by their UFOs. With its own forces ineffective against the invaders, Japan issued a plea to the other nations of the world to join together against their common enemy. Shortly afterward, the nations of Earth combined their military forces to form the Earth Defense Force. The EDF constructed two VTOL airships, the Alpha and Beta, to attack the Mysterians. The Alpha and Beta assaulted the Mysterians' UFOs and dome, but the dome's heat rays instantly destroyed the Beta, causing the attack to result in failure.

Irritated by the humans' refusal to comply, the Mysterians upped their demands, and threatened further retaliation should the humans continue to resist. However, the Earth Defense Force experienced a breakthrough in combating the Mysterians. Not only did they develop shields capable of protecting vehicles from the Mysterians' heat rays, but they also constructed the Markalite FAHP (Flying Atomic Heat Projector), a gigantic mobile lens capable of absorbing and reflecting the Mysterians' heat rays, as well as emitting powerful heat rays of its own. Meanwhile, the Mysterians kidnapped Shiraishi's sister Etsuko and her friend Hiroko and brought them into their dome. When Joji Atsumi, one of Shiraishi's colleagues who was working to combat the Mysterians, learned about this, he personally infiltrated the Mysterian Dome while the EDF launched its final assault against the aliens. The EDF deployed the now-shielded Alpha and the Beta No. 2, along with several Markalite Cannons, to assault the dome. The Mysterians were shocked when their heat rays had no effect against the humans' weaponry, as well as when their dome started to take damage from the Markalite assault.

Atsumi rescued the captive women inside the Mysterian dome, but was held at gunpoint by a yellow-suited Mysterian. The Mysterian directed Atsumi and the women to the exit, then revealed himself as Ryoichi Shiraishi. Shiraishi had learned that the Mysterians' intentions were not as noble as they claimed, and that once their dome was completed they would begin destroying Earth's major cities. Shiraishi told Atsumi and the others to flee, while he would stay behind and ensure the dome could never be completed. Shiraishi began destroying the machinery inside the dome, causing it to begin falling apart. With their dome collapsing, the Mysterians deployed a second Moguera in a last-ditch effort to destroy the Markalite Cannons. The Moguera burrowed too close to a Markalite Cannon, which collapsed on top of it and destroyed it. Thoroughly defeated, the Mysterian Leader ordered all of his surviving forces to retreat to the Mysterians' space station. Several UFOs took off from the dome, which subsequently exploded. The Alpha and Beta shot down several of the escaping UFOs, but the surviving ones managed to reach the space station. With their invasion foiled, the Mysterians were left to live adrift in space for all eternity.

Mysterians are an unlockable ally in the game, along with several other Toho alien races and multiple versions of the Shobijin.

As a result of the nuclear war which destroyed their planet, the Mysterians' bodies are ravaged with Strontium-90, causing roughly 80% of the newborn population to be horribly disfigured. Even the adult Mysterians are affected by Strontium-90, leaving their bodies covered in keloid scars and forcing them to wear full bodysuits and helmets to stay alive. The Mysterians are apparently weak to high temperatures, as the temperature inside their dome is considerably lower than the outside temperature. The Mysterians move considerably slower than humans, a side-effect of living for many generations in the low gravity of Mars. 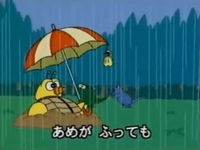 This is a list of references for Mysterians. These citations are used to identify the reliable sources on which this article is based. These references appear inside articles in the form of superscript numbers, which look like this: [1]

↑ back to top ・ contents
Retrieved from "http://wikizilla.org/w/index.php?title=Mysterians&oldid=155585"
Categories: