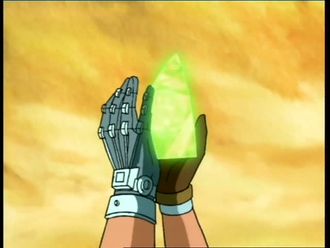 The Primal Stones are ancient relics that were first mentioned in episode 1 of the 2000 animated series, Kong: The Animated Series titled "The Return: Part 1." And appeared in episode 3 titled "Primal Power." They were sought out by Professor Ramone De La Porta in a plot to take over the world.

The Primal Stones are primary gold in colour, when they are in use they tend to glow differently depending on which one is in use

Each of the Primal Stones were used to imprison Chiros for 5000 years. Even if one remains on the island, Chiros cannot escape.

The Primal Stone of Earth can be used to control the very Earth itself, its powers vary depending on which locust totem its placed on. Each totem has its own symbol

The Primal Stone of Air has the power to create storms, tsunamis, and other disasters

The Primal Stone of Infinity, can be used to open a portal to infinity, if anyone gets sucked in they will cease to exist

Primal Stone of Life And Death

According to Ramone, the stone can grants its user immortality, however you will need a specific parchment in-order to achieve immortality

While the Primal Stones are powerful its come with some flaws, in-order to use the stones you will need to be at a specific location at a specific time.

↑ back to top ・ contents
Retrieved from "http://wikizilla.org/w/index.php?title=Primal_Stones&oldid=171218"
Categories: