This alien race is known as the Black Hole Planet 3 Aliens (ブラックホール第三惑星人,   Burakkuhōru Dai San Wakuseijin, lit. Black Hole Third Planet People)[2] or alternatively the Universe Black Hole Planet 3 Aliens (大宇宙ブラックホール第三惑星人,   Dai Uchū Burakkuhōru Dai San Wakuseijin).[3] In the English dubs for Godzilla vs. Mechagodzilla and Terror of Mechagodzilla, the aliens are referred to as the "Spacemen from the Third Planet of the Black Hole," but were frequently called the Simians by English-speaking fans, a reference to their ape-like appearance. This nickname was used to refer to the aliens in issue #3 of the IDW comic series Godzilla: Legends. Another spelling of this name, Simeons, is used in The Official Godzilla Compendium and on Toho's official English-language website.[4] In the book Godzilla 1954-1999 Super Complete Works, they are given the English name Aliens from Third Planet of Black Hole.[5]

In Godzilla vs. Mechagodzilla, the Black Hole Planet 3 Aliens resemble humanoid apes with green skin and black hair on their heads and hands. Using unknown technology, the aliens disguise themselves as ordinary humans, though this disguise disappears whenever the aliens are shot or wounded. In Terror of Mechagodzilla, the aliens' human disguises are instead accomplished using skintight masks. Underneath these masks, the aliens look less like apes and more like disfigured humans covered in keloid scars. In both appearances, the aliens wear silver full-body uniforms, though in Terror of Mechagodzilla specifically these uniforms include large helmets with two long antennae.

Kuronuma, the aliens' leader in Godzilla vs. Mechagodzilla

A Black Hole Planet 3 Alien invasion force led by Kuronuma was sent to Earth, where they established a secret base in Okinawa and constructed Mechagodzilla. The aliens unleashed Mechagodzilla in a Fake Godzilla disguise from Mount Fuji, allowing it to rampage through the Japanese countryside. After defeating Anguirus, the fake Godzilla arrived in Tokyo and was confronted by the real Godzilla. When Godzilla damaged Mechagodzilla's disguise, Kuronuma ordered the machine to shed it and unleash its entire arsenal against Godzilla. After a beam clash, Godzilla was sent into the ocean and left with painful injuries, while Mechagodzilla's head controls were damaged and it was called back to the aliens' base. Meanwhile, Kuronuma deployed an agent named Yanagawa to retrieve the statue of King Caesar before it could be used to awaken the legendary beast. Yanagawa eventually tracked the statue to a cruise ship called the Queen Coral, but was shot and killed by INTERPOL agent Nanbara. Hideto Miyajima, a scientist, discovered the aliens' base in Gyokusen Cave, and was subsequently captured by the aliens. Kuronuma forced Miyajima to help repair Mechagodzilla in exchange for the life of his daughter and their friend Masahiko Shimizu. Nanbara and Keisuke Shimizu raided the aliens' base and rescued Miyajima and the other captives, then rendezvoused outside of the cave with Saeko Kanagusuku. Nanbara, Miyajima and Masahiko agreed to go back inside and deal with the aliens, while the others went to awaken King Caesar. They were ambushed by two aliens, but were saved by Nanbara's partner Tamura. King Caesar was successfully awakened, and Kuronuma deployed Mechagodzilla to destroy him. During the battle, Godzilla reappeared and joined with King Caesar, eventually overcoming the mechanical monster. Inside the aliens' base, Miyajima, Nanbara and Masahiko were captured and forced to watch the battle. However, Nanbara undid their bindings while Miyajima used his experimental electrode pipe to sabotage the aliens' equipment. A gunfight ensued, in which Kuronuma was killed. The base began to self-destruct, but Nanbara and the others escaped in time. The aliens' base and Mechagodzilla both exploded, ending the aliens' scheme for the time being. 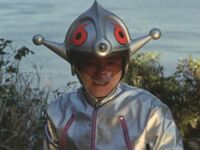 Mugal, the aliens' leader in Terror of Mechagodzilla

A year after their previous defeat, a new Black Hole Planet 3 Alien invasion force led by Mugal arrived on Earth. They planned to destroy Tokyo and rebuild it as a high-tech utopian city, then commence their conquest of the rest of the planet from there. The aliens salvaged the remains of Mechagodzilla from the ocean and began rebuilding him, while also recruiting the assistance of the disgruntled scientist Shinzo Mafune. Mafune provided the aliens with a second weapon, the monster Titanosaurus, which Mafune controlled. The aliens didn't really care for Mafune, seeing him as a mere tool in their master plan and Titanosaurus as a way to weaken Godzilla so Mechagodzilla could more easily destroy him. Unbeknownst to Mafune, the aliens had actually converted his daughter Katsura into a cyborg years before when performing surgery on her after she was injured in a laboratory accident. When Katsura was injured again after being shot by INTERPOL agents, the aliens installed Mechagodzilla's controller inside of her. Mafune was horrified to see what had become of his daughter and begged for forgiveness, but reluctantly swore loyalty to Mugal. After INTERPOL discovered the aliens' base of operations in the countryside, they moved their operations to Mafune's laboratory. From there, they released Mechagodzilla and Titanosaurus in Tokyo, reducing much of the city to a crater in a matter of minutes. Godzilla arrived to battle the monsters, but was overwhelmed by their combined power. Mechagodzilla and Titanosaurus beat Godzilla unconscious and then buried him in a ravine. The JSDF discovered that Titanosaurus was weak to sonic waves and used a sonic ray gun to distract him, allowing Godzilla to re-enter the fight and take on Mechagodzilla. Meanwhile, INTERPOL raided Mafune's lab, killing Mafune and wounding Katsura while forcing Mugal to retreat. Akira Ichinose, a biologist who had feelings for Katsura and had been captured by the aliens, held her in his arms when she regained consciousness. Katsura was ridden with guilt for her role in the aliens' twisted plan, and realized that Mechagodzilla's controller was still inside of her. Katsura shot and killed herself, allowing Godzilla to easily destroy Mechagodzilla once and for all. Godzilla made short work of Titanosaurus as well, blasting him with his atomic breath and causing him to fall into the ocean. INTERPOL chased Mugal to a cliff, where he jumped off into a UFO and tried to flee. Godzilla saw the aliens' UFOs retreating and quickly destroyed them all with his atomic breath, ending the aliens' invasion for good.

The Black Hole Planet 3 Aliens are skilled roboticists, demonstrated by their ability to construct Mechagodzilla. Very little else of their technology is shown, however. The Black Hole Planet 3 Aliens also possess flying saucers, however these did not display any weapons as they were shot down by Godzilla with a single atomic heat ray. According to Mugal, their saucers can travel from their planet to Earth in 1,000 hours. The Black Hole Aliens are able to disguise themselves as humans using unknown technology, at least in their first appearance. These disguises disappear when the aliens are shot or wounded. In their second appearance, the aliens' disguises appeared to be rubber masks that fit perfectly over their faces. In their second appearance, they also possess bulletproof bodysuits.

The Black Hole Planet 3 Aliens appear in issue #3 of the IDW miniseries Godzilla: Legends, and are referred to as the Simians. The leader of the race, Mugal, comes to Earth disguised as a human and serves as the headmaster of an academy for young psychics founded by Miki Saegusa. Mugal secretly manipulates the institute's newest student, Travis, to form a psychic link to the monster Titanosaurus so that his race can use him along with their fleet of Mechagodzillas to conquer the Earth and escape their dying homeworld. In comparison to their Showa incarnation, the Simians are slightly more humanoid and sympathetic with Mugal even stating he's not a monster, just desperate to save his world.

This is a list of references for Black Hole Planet 3 Aliens. These citations are used to identify the reliable sources on which this article is based. These references appear inside articles in the form of superscript numbers, which look like this: [1]

↑ back to top ・ contents
Retrieved from "http://wikizilla.org/w/index.php?title=Black_Hole_Planet_3_Aliens&oldid=168182"
Categories: