Godzilla: High Grade ( シリーズ,   Eichijī Shirīzu, lit. H.G. Series) is a line of two-inch tall collectible gashapon figures produced by Bandai. These figures are released in waves that usually coincide with the newest Godzilla film. They are typically sold in vending machines and all require at least minor assembly. 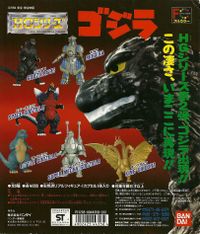 The first wave was released in 1994 in conjunction with Godzilla vs. SpaceGodzilla.[1] It includes the following figures: 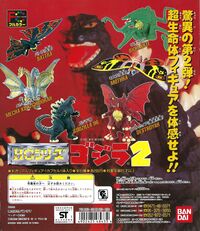 The second wave was released in 1995 to coincide with Godzilla vs. Destoroyah.[2] It includes: 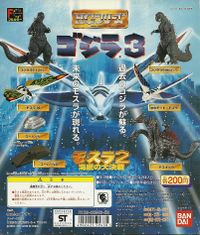 Wave 3 was released in 1997 to coincide with Rebirth of Mothra II.[3] It includes: 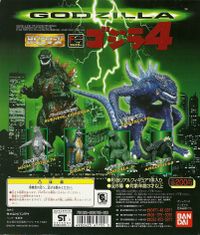 The fourth wave was released in 1998 to coincide with GODZILLA (1998).[4] Figures included in this wave are: 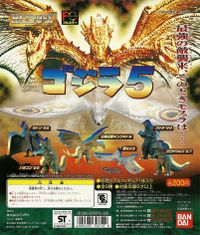 Wave 5 was released in 1998 to commemorate the release of Rebirth of Mothra III.[5] It includes the following figures: 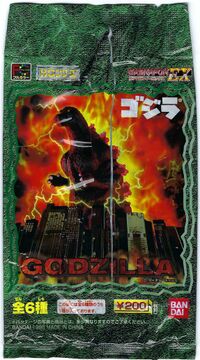 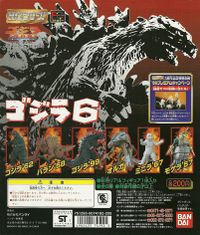 In 1999, in anticipation of Godzilla 2000: Millennium, Bandai released a sixth wave of High Grade figures.[7] It includes: 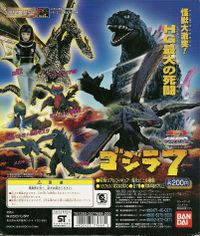 Wave 7 was released in 2000 in conjunction with Godzilla vs. Megaguirus.[8] It includes the following figures: 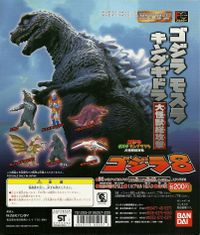 Wave 8 was released in 2001 to coincide with the release of Godzilla, Mothra and King Ghidorah: Giant Monsters All-Out Attack.[9] It includes the four monsters featured in the film, plus two classic monsters. 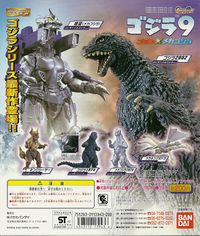 The ninth wave was released in 2002 to coincide with the release of the film Godzilla Against Mechagodzilla.[10] It includes: 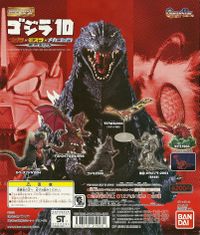 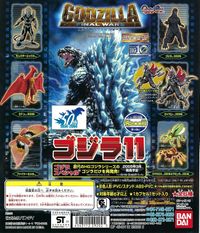 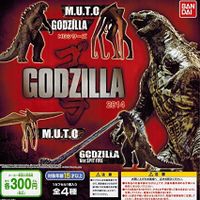 In 2014, Bandai released the first new High Grade wave since 2004, not counting the Godzilla Chronicle reissue sets, in commemoration of the 2014 American film. From this point onward, the waves abandoned their previous numbering. It features four figures: 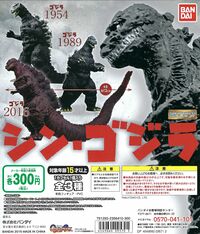 To coincide with the upcoming film Shin Godzilla, Bandai released a new wave of High Grade Figures in August 2016. The wave includes: 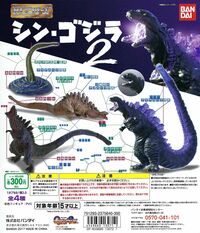 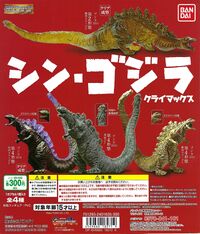 In 2017, Bandai released another wave of Shin Godzilla figures, all of which were repaints of the figures from the previous two waves. Figures in this wave are: 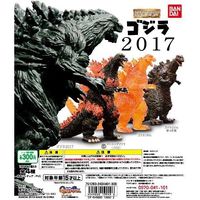 Bandai announced a wave of High Grade figures for release in the third week of January 2018 to commemorate GODZILLA: Planet of the Monsters. Figures in this wave are: 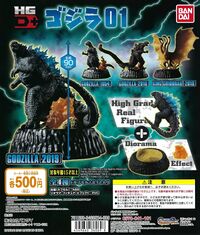 In the fourth week of May 2019, to accompany the release of Godzilla: King of the Monsters, Bandai released the first "D+" wave of Godzilla: High Grade figures. These figures come in round shells bearing the texture of Godzilla's skin that can be opened into miniature dioramas, complete with effect parts. The first D+ wave includes the following four figures: 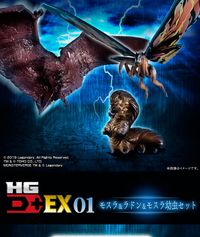 Premium Bandai released a set of "D+ EX" figures in November 2019. Unlike the previous D+ Godzilla 01 wave, these figures come as a box set with only half of the capsule shell which is used as a base for the dioramas. The set includes three figures: 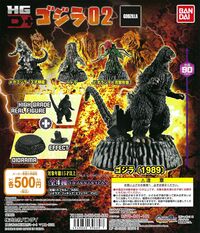 Bandai released the second standard wave of D+ Godzilla figures in November 2019. Figures in this wave are:

Starting in summer of 2000, bootlegs of the wave 4 figures began appearing on the internet, and remain common on sites such as eBay and Amazon to this day. Though at first glance it may be difficult to spot the differences between the real figures and the bootlegs, there are some notable differences. The bootleg figures are generally smaller and feature sloppier paint jobs. They also lack the marking on their tails that lists the copyright date and "BANDAI CHINA," instead simply listing the word "CHINA."[13] Below are pictures comparing the actual figures and their bootlegs.

This is a list of references for Godzilla: High Grade. These citations are used to identify the reliable sources on which this article is based. These references appear inside articles in the form of superscript numbers, which look like this: [1]

↑ back to top ・ contents
Retrieved from "http://wikizilla.org/w/index.php?title=Godzilla:_High_Grade&oldid=161220"
Categories: