The Ohio Class Nuclear-Powered Submarine is a class of nuclear-powered submarine currently operated by the United States Navy. It is first featured in the 1998 TriStar Pictures Godzilla film, GODZILLA.

After the military failed to trap Godzilla in Central Park and the creature escaped into the Hudson River, three nuclear submarines were deployed to destroy him with torpedoes. Once Godzilla dove into the river, a Los Angeles-Class Nuclear Attack Sub fired its torpedo, which Godzilla simply led back to the sub's hull, destroying it and leaving only the two Ohio Class Nuclear-Powered Submarines. While Godzilla tried to flee by burrowing away, both submarines locked on and fired their torpedoes at him. Both torpedoes struck Godzilla, who roared as he sank to the riverbed, causing the military to declare him dead, an assumption that was later proven wrong. 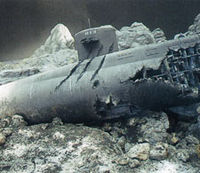 When an American Ohio Class Nuclear Sub mysteriously disappeared in the waters off Guam, the JSDF deployed the research submersible Satsuma to find its wreckage. The Satsuma eventually found the remains of the sub on the sea floor, with what appeared to be huge claw marks in its hull. Suddenly, something large moved past the Satsuma, causing its sister craft to smash into a nearby rock and explode. As the water settled, the Satsuma operator witnessed the huge glowing dorsal fins of a gigantic creature move behind several rocks.


↑ back to top ・ contents
Retrieved from "http://wikizilla.org/w/index.php?title=Ohio_Class_Nuclear-Powered_Sub&oldid=155943"
Categories: