This is a list of bootlegs of Godzilla media. A bootleg is an illegal copy of a product, which can be anything from a film to merchandise such as figurines. Bootlegs are usually the result of stolen work, such as movie footage or a figure mold, being reused, and often cheaply made and sold for a lower price. This list attempts to document known bootlegs of Godzilla media and merchandise, however due to the large number of such bootlegs may not be comprehensive.

The Uncanny Embryo is a bootleg of the 1996 DX Battery Operated Mothra Larva figure by Bandai Japan. There is a brown and a green variation. The box art features a Xenomorph from the Alien series.

Starting in summer of 2000, bootlegs of the Set 4 Godzilla: High Grade figures began appearing on the internet, and remain common on sites such as eBay and Amazon to this day, often marketed as 'cake toppers,' 'keychains' or 'Trendmasters figurines,' depending on the listing. Though at first glance it may be difficult to spot the differences between the real figures and the bootlegs, there are some notable differences. The bootleg figures are generally smaller and feature sloppier paint jobs. They also lack the marking on their tails that lists the copyright date and "BANDAI CHINA," instead simply listing the word "CHINA." Bootlegs of the Burning Godzilla specifically will often featured alternate paint jobs, recoloring the burning patches with different colors. Below are pictures comparing the actual figures and their bootlegs.

Bootlegs of the 12-inch figures of Godzilla 2004 and Kiryu by Bandai America exist.

Bootlegs for the Bandai America Godzilla 2000, King Caesar, Godzilla 1954, and Atomic Roar Godzilla 2014 first appeared on the Chinese bidding site Alibaba in 2014. Unlike the official counterparts the figures stand at over 12-inches tall. In 2018, a bootleg of the Bandai Creation Burning Godzilla appeared on Amazon.

Bootlegs of the "Smash Strike" and "Tail Strike" Godzilla 2014 Bandai Creation figures The bootlegs removed the "gimmicks" of the two figures and had poor paint jobs. In 2017, a variant of the Smash Strike bootleg appeared on the Thai bidding site ThaiElectricToy.

The Novel Style Godzilla is a bootleg of Bandai Creation's Godzilla 2000 figure distributed in China. The figure has been remolded and repainted to somewhat resemble Godzilla 2014 and supports batteries which light up a chest light and his dorsal plates.

A bootleg of the Giant Size Godzilla has been distributed in China. Differences between it and he original include white dorsal plates, much larger eyes, and removed articulation of the mouth, hands and feet (not arms and legs), in addition to some miscellaneous paint job differences along the belly and back.

Bootlegs of the four kaiju figures packaged with the board game Godzilla: Kaiju World Wars first appeared on eBay in 2014. The Gigan is particularly unusual, featuring eyes below his visor and elongated hands instead of curved claws.

Bootlegs of the Bandai Movie Monster Series Godzilla 2016 and SpaceGodzilla figures first appeared on eBay in 2017. The bootleg Godzilla 2016 figure can be distinguished from the official counterpart as it has a darker paint job with fused hands and a uneven tail.

Bootlegs of the Trendmasters Ultimate Godzilla figure exist. There are two variants, a grey version and a brown version.

In China several bootlegs of the Bandai Movie Monster Series Godzilla 2003 started appearing in 2003. The figures can be distinguished from the official figures by the lack of a tag.

Bootlegs of the Bandai The Godzilla Collection King Ghidorah 1964 exist. The figures come in two variants, a pink version and a green version.

Big Fella was a bootleg Godzilla wind-up figure that first appeared in the 1990's.

Godzilla vs Jesus was a bootleg playset produced by Forked Tongue Toys. The set comes with several military vehicles and figures for Godzilla and Jesus.

This Godzilla 1998 bootleg figure has a custom sculpt and stands at 9 inches tall. There are only two variants, a green version and a purple version.

Bootleg Mechagodzilla 1974 figures first appeared in the 1980's. However, some can still be found on the Chinese auction site Alibaba.

Bootlegs for the Bandai Movie Monster Series Godzilla 2004 and Mechagodzilla 2003 figures first appeared on eBay in 2017. The figures have poor paint jobs and are shipped broken.

In 2018, bootlegs of the King of the Monsters Series Godzilla 2016 and Godzilla 2017 figures appeared on the Chinese bidding site Alibaba. The figures are often sold in sets that include a bootleg of Jakks Pacific's Giant Size Godzilla figure and a bootleg X-Plus Godzilla 1995.

A bootleg S.H. MonsterArts Showa King Ghidorah first appeared on AliExpress, but since migrated over to eBay, where it is still being sold. It is unknown whether the sculpt is a recast of an existing Ghidorah 1964 prototype, or if it is a new sculpt.

A bootleg of the S.H. monsterArts Godzilla 2019 appeared on Shoppe, a Singaporean commerce website.

In 2019, several bootlegs based on NECA Godzilla figures appeared on Aliexpress and Shopee.

Bootlegs of the X-Plus 2014 Godzilla and Deforeal figures appeared on Shopee in 2019.

In 2020, multiple bootlegs based on Bandai Movie Monster Series figures appeared on Aliexpress.

In 2019, bootleg Godzilla 2014 figures were found being sold in Mexico.

In Thailand, a bootleg DVD of Dogora was released, featuring Godzilla on the cover. This led many fans to believe the DVD was a double-feature set or a different movie completely.

There is a bootleg German VHS of Gamera vs. Barugon which titles the film Gamera Gegen Godzilla (Gamera vs. Godzilla). It features altered artwork of the TriStar Godzilla on the front cover and screenshots of Godzilla in Godzilla vs. King Ghidorah on the back.

Godzilla vs. Megalon is perhaps the most bootlegged Godzilla movie, with several different unofficial VHS released.

A bootleg DVD of Shin Godzilla was released in Malaysia. Its cover art uses the Philippines poster for the film.

Toho Kingdom user 20th Century Boy discovered a bootleg Chinese DVD of what appeared to be a Godzilla film at a used bookstore in 2014. Unfortunately, there was no disc inside, leaving the identity of the film a mystery. The cover art shows a heavily altered Destoroyah with no wings, while the back cover includes a description of the plot of Rugrats in Paris, along with pictures from Godzilla vs. Destoroyah and Godzilla vs. Hedorah and promotional artwork for TriStar Pictures' GODZILLA. 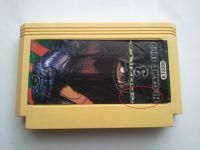 A Famicom bootleg of the NES-only Godzilla 2: War of the Monsters exists. The cartridge is yellow, boasting artwork from the 1998 GODZILLA film, and with the title "Godzilla 3 H-Game 1999." The bootleg may have seen distribution in Romania after the 1998 film was released, as eBay listings tend to come from there.[1]

A human-sized bootleg SpaceGodzilla statue appeared on the Chinese bidding site Alibaba. It has a similar color scheme to Burning Godzilla.[2]

In 2017, a bootleg inflatable Kiryu costume appeared on the Chinese bidding site Alibaba.

This is a list of references for List of Godzilla bootlegs. These citations are used to identify the reliable sources on which this article is based. These references appear inside articles in the form of superscript numbers, which look like this: [1]

Showing 20 comments. When commenting, please remain respectful of other users, stay on topic, and avoid role-playing and excessive punctuation. Comments which violate these guidelines may be removed by administrators.

3 months ago
Score 0
i have a boot leg godzilla with articulation simalar to bandai and a head looking some what like king goji.
Permalink
You are ignoring the author of this comment
Show comment | Manage ignore list

5 months ago
Score 0
That showa King Ghidorah looks so cool. I wish Sh Monsterarts would make a real one.
Permalink
You are ignoring the author of this comment
Show comment | Manage ignore list

13 months ago
Score 0
What the hell did Xenomorphs ever have to do with Mothra?
Permalink
You are ignoring the author of this comment
Show comment | Manage ignore list

17 months ago
Score 2
what kinda of drug they used when they make the godzilla vs jesus toy line?
Permalink
You are ignoring the author of this comment
Show comment | Manage ignore list

The back of the box on those Godzilla kaiju world war bootlegs says this:

"Because the nuclear test of climate anomalies caused a 90 foot high huge monsters resurrected the new York into Chaos scientists, journalists, television cameraman, soldiers and the insurance company inspectors combine against it because it causes panic and destruction is too big if not stop it went all will become ruins"
Permalink
You are ignoring the author of this comment
Show comment | Manage ignore list

43 months ago
Score 0
The modified Destoroyah on the front of that unidentified movie is surprisingly awesome.
Permalink
You are ignoring the author of this comment
Show comment | Manage ignore list

43 months ago
Score 0
Now I want a version of Rugrats in Paris that somehow incorporates the story from Godzilla vs. Destoroyah.
Permalink
You are ignoring the author of this comment
Show comment | Manage ignore list

I think I found a bootleg shin Godzilla

31 months ago
Score 0
It is a bootleg, it has a dark paint job with part of the tail being completely red
Permalink
↑ back to top ・ contents
Retrieved from "http://wikizilla.org/w/index.php?title=List_of_Godzilla_bootlegs&oldid=175941"
Categories: