Originally, the film was titled Skull Island. The film's release date was originally set for November 4, 2016 at Comic-Con 2014, with Joe Cornish being offered to direct it. The film's release date was later pushed back to March 10, 2017.[1][2][3] It was announced that Tom Hiddleston and Brie Larson will star as the male and female lead. J. K. Simmons and Michael Keaton were originally going to star as well, but the two later left the film due to scheduling conflicts.[4][5] [6] In August 2015, Corey Hawkins and Jason Mitchell joined the cast, with several other actors being reportedly considered, including Samuel L. Jackson, John C. Reilly, and Toby Kebbell.[7][8][9] The film will be directed by Jordan Vogt-Roberts with the screenplay to be written by Max Borenstein, John Gatins and Derek Connolly.[10][11][12] Simmons told MTV that the film will take place in Detroit in 1971.[13][14][15]

On September 10, 2015, Deadline and Variety reported that Legendary Pictures had moved production of the film from Universal Pictures, with whom it currently held a distribution deal, to its former partner Warner Bros., with whom it had an agreement to distribute the sequels to 2014's Godzilla in the future, supposedly in order to keep both properties under the same distributor. This immediately spawned rumors that Legendary planned to eventually produce a remake of King Kong vs. Godzilla with Warner Bros., with neither studio providing a statement.[16][17][18] On September 16, multiple sources reported that Thomas Tull had wanted to set up a film featuring both Kong and Godzilla for years and planned to include references to Monarch, the monster-studying organization from Godzilla (2014), in the script for Kong: Skull Island. However, Warner Bros. was reportedly uncomfortable with including references to one of their films in a Universal project, so Legendary moved the entire project to Warner Bros.[19][20] None of these reports were confirmed by any of the studios, and no official statement was made about the possibility of a King Kong and Godzilla crossover film for nearly a month. Guillermo Del Toro made a statement the next day confirming that Pacific Rim 2, the sequel to Legendary and WB's 2013 kaiju film Pacific Rim, had been indefinitely delayed due to the shuffling of the King Kong and Godzilla properties, but was not at all cancelled and was still being actively worked on.[21]

On October 14, 2015, Legendary Pictures officially announced Godzilla vs. Kong for 2020, after both Kong: Skull Island and Godzilla: King of Monsters have been released.[22]

In an interview conducted with Entertainment Weekly, actor Toby Kebbell clarified his role in the film. Kebbell plays an Air Force major named Chapman, who spends most of his time in the film with Samuel L. Jackson's character. It had been widely speculated that Kebbell would have been portraying Kong through motion capture, due to his portrayal of the ape character Koba in Dawn of the Planet of the Apes through motion capture alongside Andy Serkis, who had portrayed Kong in the 2005 film. Kebbell revealed that in Kong: Skull Island, Kong will be primarily portrayed by motion capture actor Terry Notary, although Kebbell did assist Notary in the motion capture process and provided reference for some of the character's facial animations.[23]

During a Warner Bros. presentation at CineEurope, director Jordan Vogt-Roberts claimed that this version of King Kong would be the largest onscreen version of the character to date, at 100 feet.[24] He later acknowledged the 147-foot King Kong from King Kong vs. Godzilla as being taller.[25] On July 15, Entertainment Weekly published an article providing more details about the film, including an interview with Vogt-Roberts. He confirmed that Kong: Skull Island would be set in the 1970's, explaining that this decade was a time where humanity "could still be confronted with myth" and "there was still unknown in the world." Vogt-Roberts elaborated that the characters would be drawn to Skull Island to investigate after the previously unknown landmass is discovered by NASA's LANDSAT program, which used satellites to map out the world from space. Vogt-Roberts revealed that Tom Hiddleston's character in the film is an ex-British SAS tracker, while Brie Larson plays a war photographer "who's seen all sorts of terrible, terrible things." Vogt-Roberts went on to clarify that the film would not be retelling the classic "beauty and the beast" story featured in the 1933, 1976, and 2005 King Kong films. Instead, the film would be focusing on the mythos of Kong's home of Skull Island. The director stated that he felt Kong needed to be extremely large in order to realistically convince someone who does not believe in myth that they are seeing a "god" when viewing him. The article concluded with a reminder that the film's cast would be present at San Diego Comic-Con the following week.[26]

Also on July 15, the official Kong: Skull Island Twitter and Facebook pages went live. These social media pages included the first official images relating to the film, featuring the film's title superimposed on a blue foggy background, with "From the producers of Godzilla" above the title and the release date of March 2017 below it, along with the film's official tagline, "Awaken The King."

On July 22, the first official teaser poster for the film was revealed at San Diego Comic-Con. The very next day, the film's first official trailer was released. The trailer showcased some of the characters and the locales in the film, and also revealed a gigantic spider monster. Natives living on Skull Island also appeared in the trailer, along with a few brief glimpses of Kong's new design.[27] 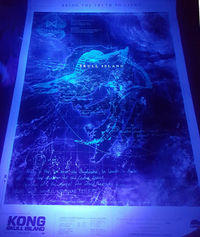 The map of Skull Island held under a blacklight, revealing hidden information and images

On October 11, 2016, Legendary revealed a new poster for the film at New York Comic-Con, taking the form of a map of Skull Island, as well as a letter signed by John Goodman's character in the film, Monarch agent William Randa. The map shows that Skull Island as a whole is vaguely shaped like a skull, rather than bearing a skull-shaped mountain in its center as in previous incarnations. When placed under a blacklight, the map of Skull Island reveals the Monarch logo on the top left corner, a Skull Crawler at the western edge of the island itself, and hidden text. A notable excerpt of hidden text located on the map is the text on the bottom corner which reads: "His mouth is fire, his roar the floodwater; his breath is death. Enlil made him guardian of the Cedar Forest, to frighten off the the mortal who would venture there. BUT WHO WOULD VENTURE THERE?"[28] This text is excerpted from Tablet II of the Sumerian epic The Epic of Gilgamesh from a description given by Enkidu to Gilgamesh of the demon Humbaba.[29] Other text on the map includes what is presumably a description of Kong himself. The text classifies Kong as an "Apex Primate," and describes him as a "Predator / Guardian / Roaming / Deity" and an "Adolescent Superspecies," suggesting that Kong may not yet be fully grown in the film.[28]

Around the same time, Legendary launched a new viral marketing website for the film called discoverskullisland.com. Like the MUTOResearch.net viral marketing website released for Godzilla in 2014, this site takes the form of a classified Monarch database teasing the organization's research into giant monsters. discoverskullisland.com is designed to look like NASA's LANDSAT satellite mapping program, showing an attempt to discover the location of Skull Island. The website reveals that William Randa is a supervising officer in the organization and that there is a large hurricane in the middle of the ocean, presumably obscuring the location of Skull Island. There was a progress bar in the top left corner that slowly increased with each day, culminating with the release of the second trailer.

On November 11, 2016, a Twitter account for Monarch made in October 2016 made a tweet about a classified case file written in an encrypted code.[30] Once translated, the code reads: " DESTINATION ACQUIRED! Skull Island".[31][32] Around the same time, the viral site discoverskullisland.com received an update. The update revealed that the "Terra Research" has been completed and that Skull Island is located in the center of the hurricane. The site has four encrypted files that can only opened by their own unique passcodes. The first of these files is opened by the passcode "destination acquired" and reveals a gif of a scene from the movie showing helicopters reaching Skull Island. The next day, the official Twitter account for the film tweeted a brief teaser trailer for something to be released in four days, with a teaser being released subsequently every day until the countdown was reached.[33] [34][35][36]

That same day, the Monarch Twitter tweeted a video of a radio broadcast featuring a man saying military call signs.[37] The call signs translate to "skydevils" and unlock the second encrypted file on discoverskullisland.com.[38][39] The file in question is a scene from the movie featuring King Kong swiping at a helicopter. This scene is where the screenshot showing the new Kong design, released on November 10, 2016 by Entertainment Weekly, comes from. Jordan Vogt-Roberts gave a description of the scene, saying that it comes from "a point in the movie where [the audience is] not quite sure what Kong is, what his purpose is, how people should be perceiving him. Through the folly of man, where our initial is to attack anything that is not a known quality, both sides jump the gun, Kong and the humans, and it kicks off a relatively messy engagement."[40] On November 13, 2016, Monarch's Twitter posted yet another cryptic Tweet in binary code.[41] The binary message translates to "WE DON'T BELONG HERE" and unlocks the third encrypted file on discoverskullisland.com.[42][43] The file unlocked shows Kong tearing a helicopter in two (possibly the one that he was fighting in the previous file). On November 14, 2016, Monarch's Twitter released a monochrome overlay featuring their logo that contains a hidden message, saying "ENDANGERED SPECIES", which is used to unlock the fourth encrypted file, which is footage of two gigantic ape skeletons.[44][45][46] The teaser released to the Kong: Skull Island Twitter account the following day reveals that these skeletons belong to Kong's species and the film's main characters were walking between them.[36] That same day, Monarch's Twitter released the code to unlock the last encrypted file, which translates to "SKULLCRAWLER".[47][48][49] The file that the code unlocks shows what appears to be William Randa standing in a burning field as a crocodilian kaiju with long forelimbs emerges out of a nearby river.

On November 16, 2016, two posters for the film were released through the social media accounts of Brie Larson and Tom Hiddleston. The same day, the second trailer debuted on Jimmy Kimmel Live, introduced by Hiddleston in a gorilla costume. This trailer introduced the film's kaiju antagonists, the Skull Crawlers.

On December 30, 2016, the film's social media accounts posted the first of eight Monarch dossiers on characters from the film, starting with Tom Hiddleston's character James Conrad.

This is a list of references for Kong: Skull Island/Development. These citations are used to identify the reliable sources on which this article is based. These references appear inside articles in the form of superscript numbers, which look like this: [1]


↑ back to top ・ contents
Retrieved from "http://wikizilla.org/w/index.php?title=Kong:_Skull_Island/Development&oldid=129024"
Categories: