Alcatraz Island is an island off the coast of San Francisco, which was used as a federal penitentiary from 1934 to 1963 and became a national landmark in 1989. It is an important location in the 2016 animated Netflix series Kong: King of the Apes. 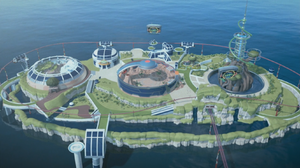 Alcatraz refitted into a museum

It is unknown what the state of Alcatraz was before 2049, but in that year the California government arranged for the gigantic ape King Kong to be kept on the island, and allowed Dr. Leo Remy to refit the land into the Remy Natural History Marine Preserve, which became colloquially known as Kong Island. It was outfitted with a large climbing tower for Kong, while also sustaining large areas for Biono-botic triceratops, pterodactyls and tyrannosaurus in its "Dino Zone". It also housed hippos, elephants, ostriches, polar bears, seals, giraffes and zebras while being surrounded by an aquarium. Its most popular feature proved to be "Kong Tower", which served as the ape's habitat, and an attraction where visitors could ride up the climbing tower in an elevator and see him at the top.